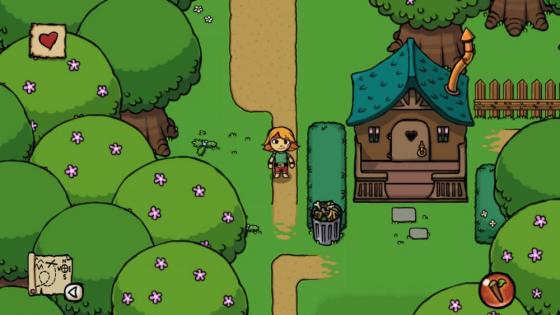 The practice of indie developers making clones of classic games has become highly prominent in recent years, as a growing subset of gamers grow tired of the increasingly generic parade of first-person shooters and seek simpler experiences, with Mario and Zelda the prime candidates for reproduction. Ittle Dew falls into the latter category, shamelessly copying the tropes of classic Zelda games in a light hearted and self-referential way, with mixed but mostly positive results.

Ittle Dew is a game that is almost devoid of story and context. The eponymous heroine and her cynical straight-man companion, Tippsie, set out with one goal: to adventure. There is no façade of importance placed on your actions; the goal is simply to enjoy yourself. This approach works very well, allowing the gameplay to remain the consistent focus.

Mechanically, Ittle Dew is very similar to Zelda, most notably A Link to the Past. Gameplay consists of a variety of puzzles, rudimentary combat and a series of boss encounters. The puzzles are the most successful element, consisting mainly of block-puzzles and using melee weapons of various elements on both enemies and stationary blocks.

Although they aren't all that difficult, most of them require at least some thought, and the "eureka!" moment of solving them is often quite satisfying. They can become a little trial-and-error at times, causing you to have to leave the room and re-enter to reset the puzzle, but for the most part they are enjoyable. 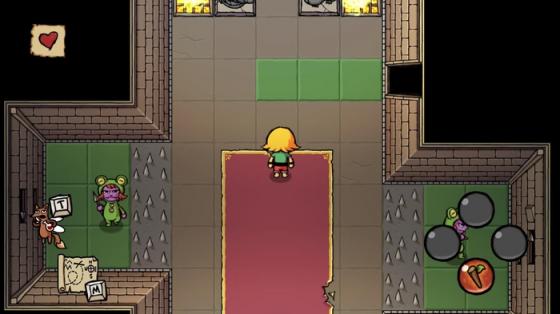 Combat isn't quite as successful, however. You are given only a single attack, either with a simple stick or one of the few elemental weapons. There is no option to dodge, block, strafe or retreat without turning your back to the enemy and leaving yourself vulnerable, removing much of the finesse to be found in the Zelda games that Ittle Dew so lovingly apes. Encounters with enemies very often consist of simply hammering the Z key with little thought for timing and skill. Passable, and never game-ruining, but not what you'd call sophisticated.

Boss fights are placed periodically throughout the game, usually at the end of a dungeon. My measure of a good boss fight is that it should be memorable; requiring an individual approach that tests the skills the player has gained thus far. Ittle Dew meets these criteria brilliantly, as every boss enemy is unique, each with entertaining dialogue and their own methods required to defeat them, testing both the player's puzzle solving and combat abilities.

As well as being a love letter to classic Zelda, Ittle Dew is also presented as a parody of the series, taking light-hearted jabs at many of its tropes. Tippsie will often react with disgust and confusion as you perform staple actions of the series, the first time you eat a heart is a memorable example. It's usually the fuel for one of Ittle's hilarious quips, which elicit a laugh more often than not.

It's worth noting that this game does not subvert any of these classic tropes, it simply includes them and then points them out to the player, albeit in a harmless, fun way. There certainly aren't any harmful damsel-in-distress stereotypes being perpetuated in this game, for example.

Quite the opposite, in fact, Ittle is a brilliant female protagonist; independent, witty and highly capable. This is the kind of thing that fathers who mod classic games to include female characters for their daughters have been waiting for. 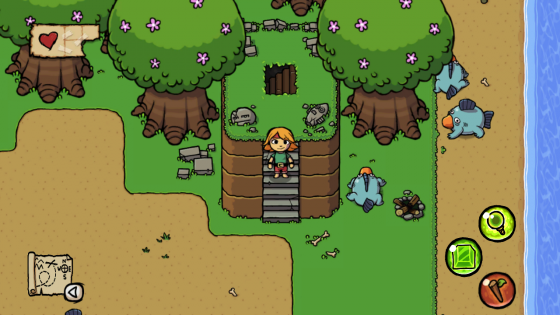 The art style of Ittle Dew is again, very purposefully similar to Zelda. From the bright and colourful overworld to the aesthetic design of the castle and dungeons, everything is designed with a vibrant and classic style. Thankfully eschewing the common-place retro pixel graphics that many indie games utilise nowadays, Ittle Dew has more of hand-drawn, cartoon-esque style which is both simple and highly endearing.

The music is also very classic, consisting almost entirely of simple upbeat synth-based tracks. Although it can become repetitive at times, it is pleasant more often than not and greatly enhances the old-school adventure feel of the game, even if you do have to mute it every now and then while attempting to solve a tricky puzzle.

Ittle Dew is not a particularly long game, lasting somewhere around 3-5 hours, with very little replay value, in my opinion. There are hidden items to collect, including cards which the game itself acknowledges are useless, but the option is there for completionists. Many of the jokes will still be entertaining on a second run, but all in all there's not all that much here to encourage multiple playthroughs, outside of simply loving the game or speed running, for example.

Overall, this game is a mostly entertaining tribute to video game history. As long as you don't expect anything life-changing or revolutionary, fans of simple, classic games should find something to like in Ittle Dew.

Overall, this game is a mostly entertaining tribute to video game history. As long as you don't expect anything life-changing or revolutionary, fans of simple, classic games should find something to like in Ittle Dew.