The game has two game modes for you to play. There is the full “Quest” mode and “Just Cards”. The Just Card version skips all the storyline and the no jewel bonus game hence the name: Just Cards. There are about 100 levels in total for you to work through regardless of which mode you play in. 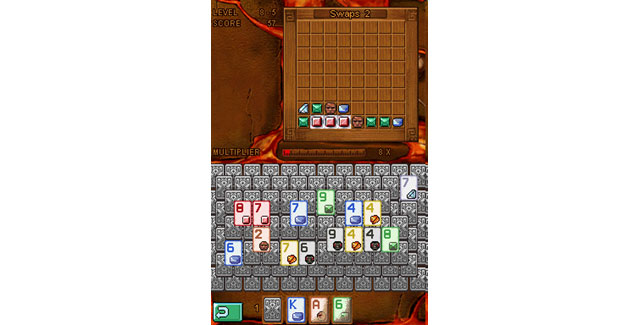 There is a rough storyline that you are the nephew of the adventurer Professor Pack and by playing the game you slowly unlock more entries in his journal which explains the back-story of the game. While I must admit I haven’t paid much attention to this storyline it’s a nice touch.

The main idea in Jewel Quest Solitaire is to move cards from the layout into the main pile at the bottom of the screen. The main rules are that the card you are moving must be one value higher or lower than the top card that is displayed at the bottom of the screen. After a while you will notice that you have no remaining plays on the current top card. To carry on the game you can flip over a card from the pile and start again, trying to clear the cards before you run out of moves and cards from the pile. There is an undo button which will get rid of any mistakes but be careful as it is limited. So everything sounds simple so far? Well there is just one more twist that happens during the gameplay. 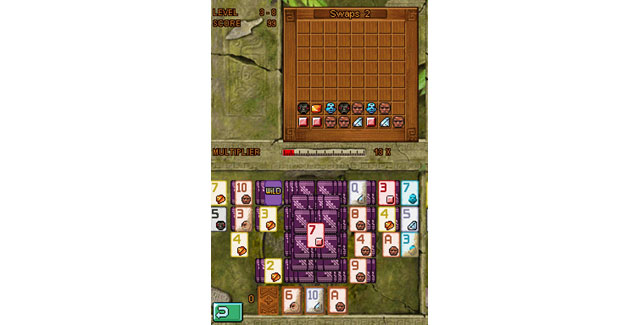 The Wild cards are random cards that can appear through the game at any time. While these cards can offer benefits which include multipliers which range from 3x to 7x, there are also other useful ones. These add more cards to your stock pile and also ones that show the cards in the stockpile so you can see what is coming up next to plan your moves.

While this game may seem all about the cards there is also a mini version of Jewel Quest that can be played once the level has been finished. As you play the card jewels are dropped in and fill the grid in the above screen whilst more jewels are added for bonuses, like having cards with the same suits. Once three or more jewels are placed in a row the squares will turn gold but in later levels they will only turn silver meaning you will have to re-do the 3 in a row to make this a complete grid. In this you are allowed to swap gems around the board to form the 3 in-a-row lines and try to get all of the squares to turn gold. Again you only get a certain number of swaps to do this in and these vary on how well you played the main game. 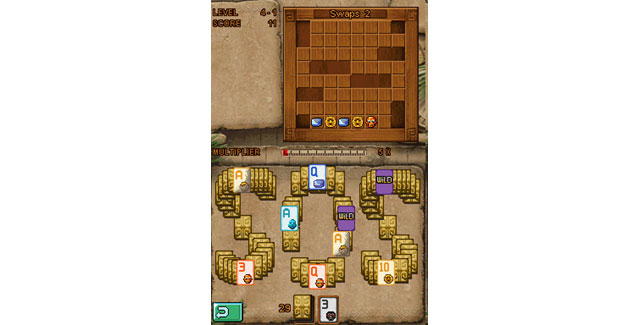 While the game plays well and is enjoyable there is still a great deal of luck to this title. You will notice that sometimes all the cards will seem to land perfectly for you and other times you will be out of luck before you have cleared a few cards. There are also different styles of stock piles; some will be the standard with one card turned over, yet in later levels you will find yourself with three cards flipped over and a very small stock pile or none at all.

This is a good mini-game that will keep you occupied for a few hours at a time and the replay value is endless which allows you to go back and play any level again. There is little bad that I can say about Jewel Quest Solitaire: everything is top notch and well presented.