I’ve not long been aware of JoJo’s Bizarre Adventure. A couple months back, when a friend recommended I start watching the anime, I picked it up and blasted through the first three parts in quick succession. Each is based around one member of the Joestar family, starting in 1880’s England with Jonathan Joestar. After Jonathan’s adopted brother, Dio, tries to assassinate their father and claim the Joestar fortune, Dio uses a stone mask to transform himself into a vampire - yep, and this is where the Bizarre bit starts.

JoJo’s Bizarre Adventure: Eyes of Heaven is a brand new story, and one that is definitely not going to be considered canon. Opening with Jonathan’s great-great-grandson, Jotaro, defeating a reawoken Dio, this is the point that usually marks the end of Jotaro’s “Part”. Instead, Jotaro finds a book belonging to Dio that describes how to get to heaven. As Jotaro and his grandfather, Joseph, make to leave Egypt, they are approached by some familiar faces… and who these characters are and why they are significant will be largely lost on anyone who hasn’t watched or read JoJo’s Bizarre Adventure, and at very least will be a massive spoiler! 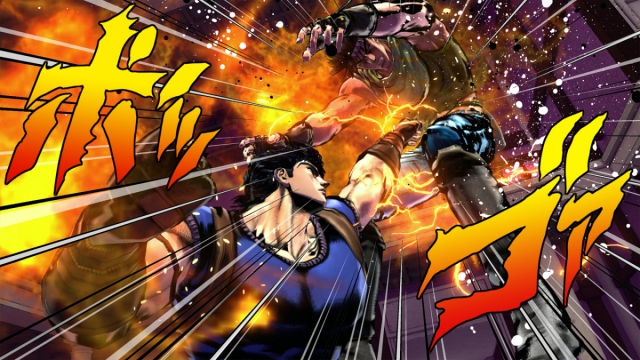 You see, JoJo’s Bizarre Adventure doesn’t hold back from killing off major characters - it happens on a regular basis. Eyes of Heaven’s story is basically “What if everyone who died in the series came back to life but they were evil?”. Understandably, if you haven’t ever heard of JoJo, you’re going to have no idea what’s going on - and if you aren’t all caught up to even Part 8, which is still being released today, you’re going to have every death in the series spoiled.

Using pieces of the Holy Corpse (I don’t know what this is, but apparently it’s something from Part 7), Jotaro and his gang travel through time to find the other JoJo’s, but they don’t even go through the parts in order. Eyes of Heaven jumps straight from its opening in Part 3 into Part 5, before going back to Part 4 and then Part 1. It’s a real mess, but Eyes of Heaven’s story relies more on the characters themselves rather than the events of each Part, so it kinda works in the end. 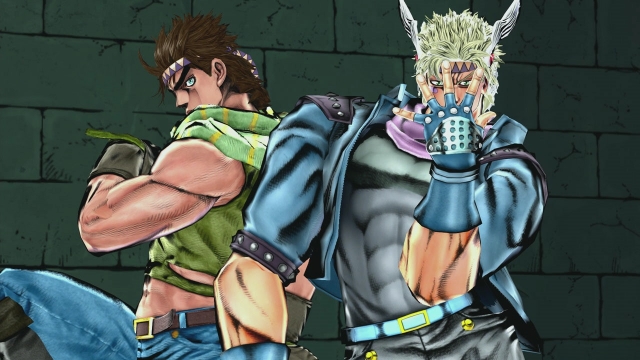 When you aren’t fighting, you can move around small hub areas and interact with a handful of characters, but they never seem to offer more than a single line of dialogue. You can replay earlier fights at a harder difficulty for more rewards, like victory poses and costume colours, and you can access a number of bonus fights that are even tougher.

Other than the story mode, there isn’t much more to do in Eyes in Heaven. There’s a free battle that lets you pick from the roster of 52 characters, and an online section that lets you play player and ranked matches. I think this game could have benefited from an extra mode like letting you play significant fights from the series, instead of everything having this backdrop of the Eyes of Heaven story.

The gameplay will be familiar to those who played CyberConnect2’s Naruto Shippuden: Ultimate Ninja Storm games. Here, you typically enter a fight with yourself and an AI partner facing off against a pair of opponents in an arena. Unlike the Ninja Storm games, you aren’t tethered to each other in the same way, allowing you to freely move around. This comes with both pros and cons, as it’s now much easier to create distance when you need to escape but your attacks whiff past the enemy far more frequently in turn.

Square and triangle do light and heavy attacks, respectively, while cross and circle are your jump and dodge buttons. Holding down L1 and pressing a face button will perform a special attack, such as Jotaro’s ORA ORA or Caesar’s Bubble Cutter, similar to how Jutsu’s worked in Ninja Storm. R1 is dedicated to each character’s unique ability, which can be things like Hamon Breathing and stopping time which can turn the tide of a battle. R2 is your block button, and L2 is a guard breaking sprint.

The arenas are based off of significant locations in each of the Parts, such as the Joestar mansion from Part 1 and the Cairo rooftops from Part 3. Each incorporates multiple levels and rooms which could lend to a more tactical approach but in my experience they do little more than make the arenas feel a little less like a box you’re just playing in. 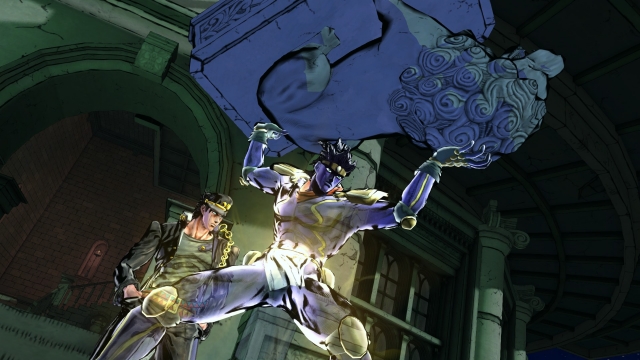 As a fan of JoJo’s Bizarre Adventure, Eyes of Heaven is a blessing and a curse. Collecting all my favourite characters in one game and letting me mix and match them in combat is great fun, but doesn’t last - especially when I chose to stop playing the story mode halfway through due to not wanting to spoil the experience of reading the manga. The combat too is not one of CyberConnect2’s greatest offerings, with the fighting feeling far too loose and disconnected - completely the opposite of their last JoJo game, All Star Battle.

I wouldn’t say it’s a must have for anyone, but if you’re a fan of both JoJo’s Bizarre Adventure and of CyberConnect2, then you should find something to enjoy here, even if that feeling doesn’t last long.

Collecting all my favourite characters in one game and letting me mix and match them in combat is great fun, but doesn’t last - especially when I chose to stop playing the story mode halfway through due to not wanting to spoil the experience of reading the manga. The combat too is not one of CyberConnect2’s greatest offerings, with the fighting feeling far too loose and disconnected - completely the opposite of their last JoJo game, All Star Battle.

Meet the Pillar Men in This New Trailer for JoJo's Bizarre Adventure: Eyes of Heaven 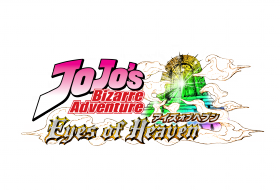