Let’s face it, thanks to Marvel’s Thor, we all think we’re pretty hot on our Norse mythology. Sure, there’s Thor, and a really big hammer, Odin, Loki and a shiny bridge. You stroll into a game like Jotun, which is firmly rooted in the realms of Norse mythology, and expect to have seen everything they can throw at you before.

As it turns out, the Marvel movies barely scratched the surface of the complex wealth of Viking mythology. Jotun, a hand-drawn, 2D exploration game, takes all the characters we know and love - Thor, Odin, Frigg, Loki - and rips it away from the Hollywood cliches they have become in our eyes. They’re placed firmly back into their original setting, back in times rife with legends, Vikings and gods. Not a single Avenger to be seen. 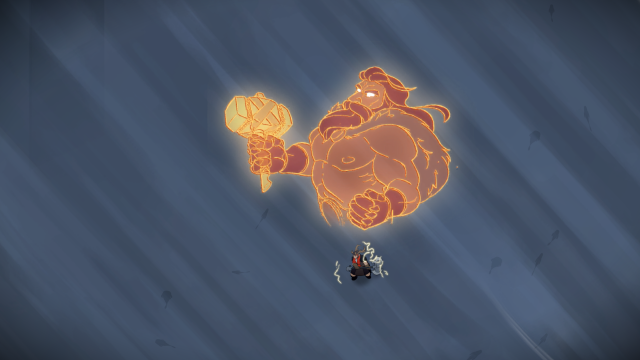 The game begins with a soft, female voice murmuring in a beautiful Scandinavian language (presumably, Old Norse). Thora, the main character, tells how her boat sank, sending her to an icy, watery grave. A warrior who doesn’t die in battle is unworthy of a place in Valhalla, the glorious afterworld of the Vikings. And yet, the gods favour Thora, and give her a second chance - a chance to prove her worth to them, by completing a series of brutal tasks. She must defeat the five elemental Jotun.

In each realm, you must face a gigantic boss, called a Jotun. The realms consist of places torn from mythology and folklore, and basically consist of Nature, Cave, Winter, Storm and Fire. You begin in the Barrow Mound, a lush, green, wooded area. You fight your way past spiked plants that erupt from the ground to thump down on your head, enormous vines that cross your path and must be hit with your heavy axe attack to make them cringe out of the way, and mushrooms that spit a poisonous gas, forcing you to flee to the blue flowers that act as an antidote.

To help you along your way, a handful of ancient Norse gods offer Thora a sliver of their power. You unlock these powers by visiting enormous God Shrines. The first power you encounter is from Frigg - the power to heal. Later in the game, Odin, Thor, Loki, Freya and Heimdall each offer various shields, attack buffs and abilities; for example, Thor lends you the power of Mjolnir, which gives Thora’s heavy attack a buff to increase damage dealt. You can use each power a limited number of times, but you can quickly cycle through them to select the power for the job at hand. 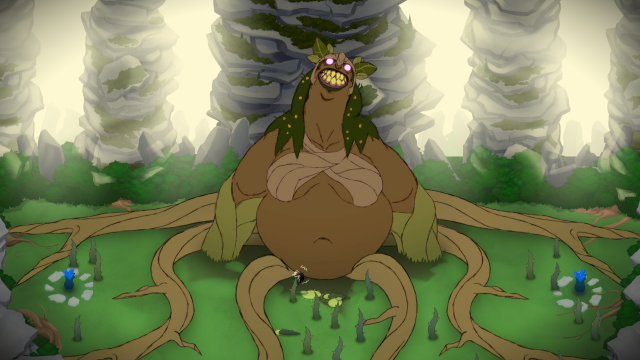 The ultimate objective of the game is to discover Runes, which will release the area’s Jotun. Defeating each Jotun is the key to Thora’s entry to Valhalla! Although the concept of the game is simple enough, defeating the Jotun is far from an easy task - they are enormous. The camera often zooms out at points in the game to scale just how tiny Thora is in this world of gods and giants. She is dwarfed by enormous trees and creatures, and of course the Jotun themselves. Defeating them seems like an impossible task. And although it certainly is difficult, it has the same appeal as brutally punishing games such as Dark Souls - you just know you were a few hits off beating them that time, just one more try! And what’s more satisfying than beating up a gigantic god-like beast, when you are barely the size of their pinky toe?

Although the camera settings in Jotun are inventive in that they zoom out to show scale, or zoom in to heighten the sense of exploration, and not knowing what lies a few steps ahead, it feels a little limiting to have absolutely no camera control. Whilst adding another element of challenge to the game, it at times seems an inconvenience. Being able to pan the camera around a little, or to zoom out, would allow for more connection with the map and the environment around Thora.

Because of your limited attacks, you are forced to methodically plan your moves, and learn from your mistakes. The bosses tend to have a pattern of attacks, with repeated pauses which Thora can use to her advantage. A fist will generally be slowly raised before it slams down, giving you time to dodge out of the way and plan your counter-attack.

Jotun is beautiful. It is simplistic and 2D, but the hand-drawn artwork truly lends itself to the theme. You feel like you're exploring a fairytale as Thora’s boots tread along oversized foliage, snow drifts or starry constellations. There is little in the way of a tutorial, but there is really no need. The controls are as simple as moving up, down or sideways, dodging, swishing your axe, a heavier attack with your axe and using your god powers.

There is a map, either on your pause screen, or drawn like a galactic cave painting at the entrance to each area. But it is extremely rudimentary as maps go, more of an illustration giving you a vague idea of which direction you should be moving in than a detailed explanation of where things are relative to yourself. Although this emphasises the element of discovery in the game, it again feels too limiting, and it is frustrating to find you’ve retraced your steps or taken a wrong turn. Thora moves extremely slowly, even with her “dash” move. So moving in the wrong direction often means a laborious trek to correct yourself, which detracts from the flow of the game. 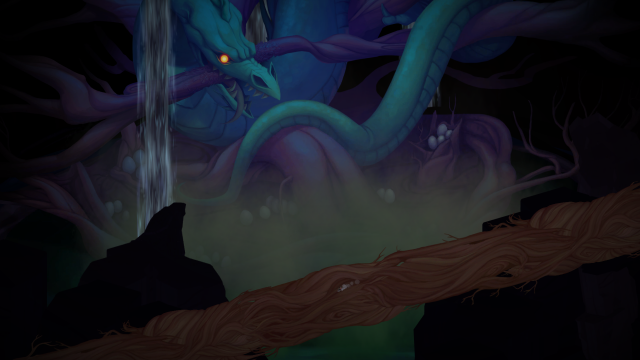 There are a number of experiences and puzzles that you must work out for yourself (often by coincidence). Using constellations to correctly draw animals by connecting lightning sticks, taking cover from blizzards behind rocks or curing yourself of noxious gas are all situations you must figure out for yourself - the gods are not inclined to give too much information away!

The puzzles, bosses, environments and the constant influx of rich, Norse lore is invigorating enough to make Jotun an excellent experience. The artwork is stunning, the combat is fast-paced and intuitive and the element of exploration is captivating. As a fan of Norse mythology, I found the storyline interesting and informative, whilst not being too overpowering for gamers less keen on the idea of a history lesson.

Although it could allow the player a little more control, Jotun is a pleasure to play - check it out. You’ll be Thor-ry to miss it!