Describing Journey accurately and succinctly is a difficult task. The mechanics and presentation are too unconventional and undefined for it to classify as a platformer or an action-adventure game, but I hesitate to use the term “art game”, out of fear that the stigmatic nature of that word may associate it with infinitely inferior experiences such as Dear Esther and The Path. In many ways, however, “art game” is the correct term, for Journey is both a spectacular game and a stunning work of art.

Journey’s story is virtually non-existent, at least in terms of traditional plot and narrative. There is no dialogue, no introduction to the setting and no details given about your character. We aren’t told who they are, why they are here or where they are going. Instead, the story is told in a far more abstract manner, utilising subtle symbolism and metaphor to convey emotion and meaning. As such, there is no single correct interpretation of Journey’s messages, and it is left up to the player to decide exactly what the various pieces of symbolism mean.

For the most part, gameplay consists of simply walking through the various environments, guiding a mysterious hooded figure over deserts and snow-covered mountains. Along the way you collect small pieces of cloth, used to charge a meter on your scarf. In turn, this allows you to jump and fly, the distances of which increase as you progress through the game. Pressing ‘O’ emits a musical note that can be used to interact with both the fluttering pieces of cloth and the various symbols found throughout the world. 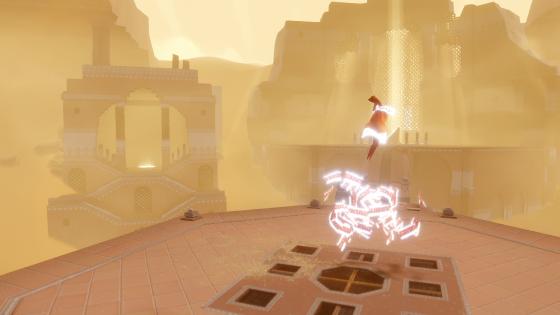 The game will also occasionally add another character to your game via online functionality. Despite the fact that you cannot communicate with your partner outside of using your chimes, you assist each other in reaching your goals, refilling each other’s meters and guiding the way. The multiplayer aspect does not feel forced however, as it so often does in modern games. Instead, cooperative play feels organic and natural, offering a pleasant addition to an almost-universally isolated world.

These very simple systems are immaculately implemented. Travelling through the world feels smooth and unhindered, with the few basic mechanics offering a simple and always enjoyable gameplay experience. It’s true that Journey is not the most interactive game out there, but the small amount of interaction the player has with the game’s world is enough to make them feel involved in the experience, casting them as a welcome participant where something like Dear Esther shunned them as a detrimental distraction, and it’s this small token of inclusiveness that turns Journey from a great piece of art to a great art game.

It’s worth noting that this is a very short game. It will most likely take no longer than 2 hours to complete, so those of you who buy games solely for their length will not be satisfied. However, this is perhaps the shallowest approach one could take to Journey, a game that accomplishes more in its meagre running time than many games that are infinitely longer, and one that would certainly have been inferior had its length been artificially increased. Not to mention the fact that there is plenty of value to be found in simply playing the game again, be it to enjoy the graphics and soundtrack or to attempt to decipher its cryptic messages and metaphors. 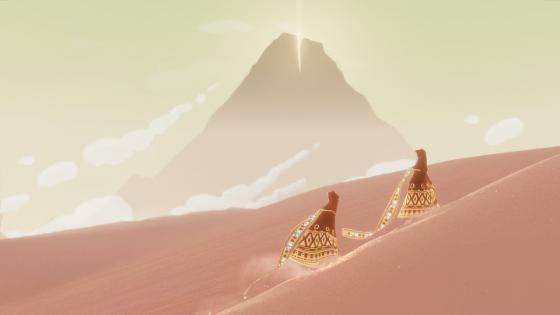 In terms of presentation, I really can’t say enough positive things about Journey. The in-game world is absolutely gorgeous, boasting a vibrant and colourful art style, the likes of which are rarely seen in modern day video games. Environments are vast and beautifully rendered, with sand and snow flowing delicately and realistically beneath your character’s feet. The lighting is sublime, standing out particularly in desert areas, in which the sun gleams delightfully against the sand.

I would go as far as saying that Journey is one of the most graphically accomplished games on the PS3. Although Journey is not as visually busy as other notable PS3 games, such as Uncharted 3 and Heavy Rain, the simplistic and striking visual style allows the pure graphical prowess to stand out all the more, making it look fresh and vital in comparison to its peers.

Similarly, the soundtrack is absolutely incredible. My measure of a great score is one that complements the game, accentuating the feeling or message conveyed by a given scene, and in that respect, Journey’s dynamic score is practically flawless. Ambient soundscapes and Middle Eastern melodies augment the relaxed atmosphere of the desert environments, while more fast-paced filmic pieces add to the excitement of the few faster moments. It’s absolutely sublime, from start to finish. 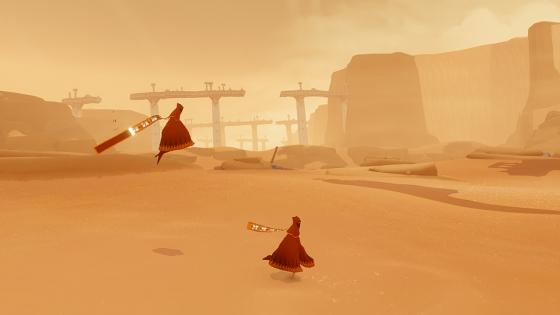 All of this is to say nothing of the absolute plethora of bonuses included in this collection. To begin with, both of thatgamecompany’s previous titles have been included. The first of these is titled Flow, an extremely simple, originally Flash-based game in which the player guides a small worm-esque creature through a vaguely aquatic environment, collecting cells and optionally facing enemies. Lacking any kind of traditional challenge, as well as any state of victory or failure, Flow is more comparable to a relaxation tool or a piece of art than a game, in many ways.

The second additional game is Flower, in which the player guides an ever increasing group of petals through fields and meadows, activating flowers to open up new areas. Although Flower is more conventionally structured, featuring advancement and an endgame state of victory, it still lacks much of the interactivity found in Journey. Flower is particularly notable for its graphics, boasting perhaps the most strikingly colourful visuals I have ever seen, making the game fun to look at, if not always fun to play.

This is especially true given that it, along with Flow, utilise Sixaxis controls exclusively, which I personally detest, and I feel that the option to use more traditional controls would have improved these games immeasurably. However, if you find them tolerable or even enjoyable, you will most likely enjoy the experience of playing these games far more than I did. 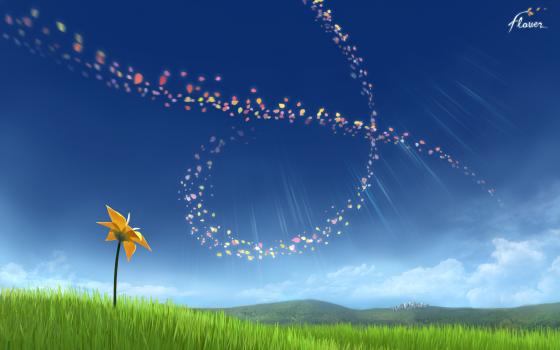 Journey: Collector’s Edition also contains 3 small retro-esque games developed by thatgamecompany. Grave Diggers, an extremely retro zombie-based platform shooter, Duke War!!, a childlike game in which you collect workers to earn money, and Nostril Shot, my favourite of these games, a 2.5D wave-based shoot ‘em up. Although none of them are particularly notable, they are a somewhat pleasant bonus, and prove that thatgamecompany are capable of producing more casual games than they’re known for.

Lastly, this package contains developer commentaries, dynamic themes, trailers, downloadable art and most importantly, the soundtracks to all three of the package’s main games, giving plenty of additional content for your money.

Journey is perhaps one of the most beautiful and memorable games I’ve ever experienced. A must-play for all PS3 owners, and this collection, providing as it does so much additional content, is highly recommended to both fans and newcomers alike.

Describing Journey accurately and succinctly is a difficult task.