The original Jumanji movie starring the great Robin Williams came out back in 1995. Many years later, we have a videogame version of that classic cursed board game for the Nintendo Switch, PC, and mobile devices. Loving the movie, it seems like this is a no-brainer for a game, so it felt like the perfect title to play with my son. 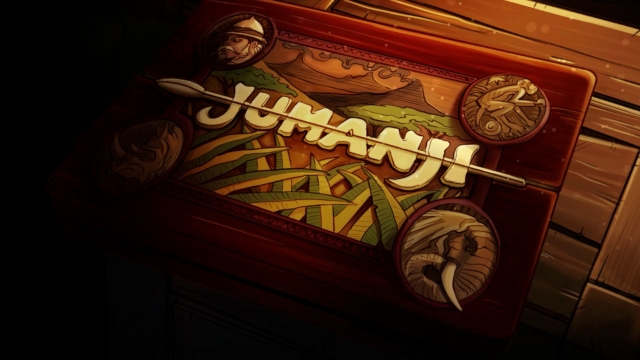 Jumanji: The Curse Returns is a four-player game with players working as a team, trying to get to the middle of the wooden game board. But before you can jump into multiplayer mode, you will have to play through a tutorial to teach you the ropes of the game. First, you get to select which character you want to play as and which animal token you wish to use. There are eight different people you can be: Judy, Peter, Alan, and Sarah from the original Jumanji movie are here, with four other random characters Holly, Lucas, AJ, and Yuke. I was kind of surprised that the characters from the newer Jumanji movies weren't here. 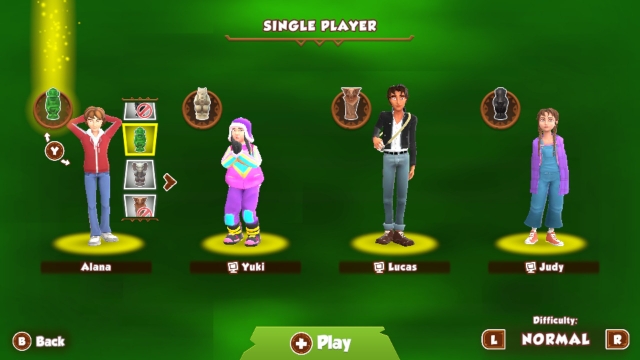 Players select which map they want to play: Brantford — the town where the movie was set, or the generic Winter Resort, each with six locations to protect. I have no idea why the characters decided to take this board game along to sit outside in the snow and play! You roll the two dice and move around the board; if you happen to roll doubles, you can roll again one more time. When your token stops on a space, a message will show up in the middle of the board, giving you a riddle of what happens next. Sometimes you will lose a turn and have to go back or come to a space where you get a choice between two jewels that will power up your token, but most of the time, the team will have to battle angry animals with decks of cards. There were many times when the same riddle would pop up, and we had to fight the same animals again. It would have been nice to fight a greater variety of foes from the movie or even just other jungle species. To be victorious, one of the team's tokens needs to get to the middle of the board and, like the movie, yell "Jumanji!" 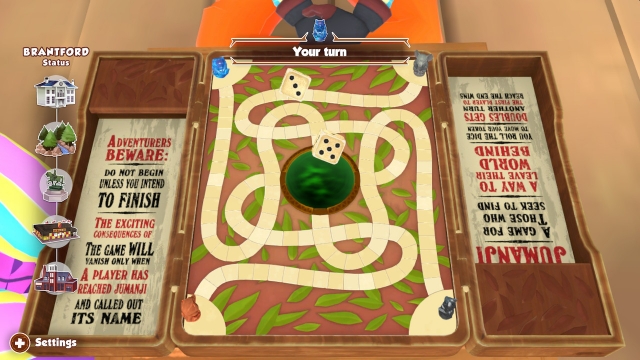 In battle, three cards are drawn at a time, and you select the card you want to play with and which animal you want to target. Three animals will show up at once, and there is usually one that is stronger than the others. To defeat these Alpha characters, you must use a Token attack as regular attack cards can't hurt them. Each card has a value of one, two, or three, corresponding to the amount the time meter has to fill before you can attack. The cards with a low number are weaker and faster to use; the ones with a higher number will require you to wait before using. Once you get the hang of it, chances are you will button mash and hit the first green card you find to ensure you don't run out of time on the clock. You will never run out of cards as they are constantly being shuffled during the battle. Each enemy has a rage meter, and when it goes down to zero, vines to attack your team. Some cards will reset this meter, making them have to wait again until it runs out. Vines will start to wrap themselves around the different characters and their cards. To free yourself or your teammates, you will have to use an axe card on this aggressive vegetation; this is the only way to get out. It feels wrong to target yourself or teammates with an axe! If you are overcome with vines, you can ask your teammates for help, but I must warn you that the only character who helped me out was my son, not the computer characters. 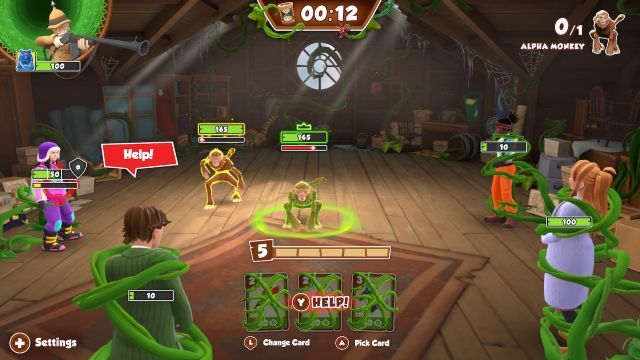 As you win these battles, you will earn coins to spend on new cards to add to your hand. These are colour-coded according to what they do: green cards attack, and blue are magic cards you can use to replenish the health of yourself or your team members. Others have different effects, like adding time to the clock when you are fighting or can be used to power up your token. If you are defeated, vines will take over that location on the map, and if you lose five times, you lose the game. When you are defeated, you will still get some coins for your efforts to put towards adding to your deck. Wild animals are not the only things that you will have to worry about while playing Jumanji: The Curse Returns; Van Pelt, the hunter with the crazy moustache, will actively hunt you once he is released. So he will be shooting at you during battles against the jungle wildlife. He damages your team members and prevents you from earning Team Up points that allow everyone to perform an attack together. There is no way to attack him, so you will just have to put up with it until the end of that game. 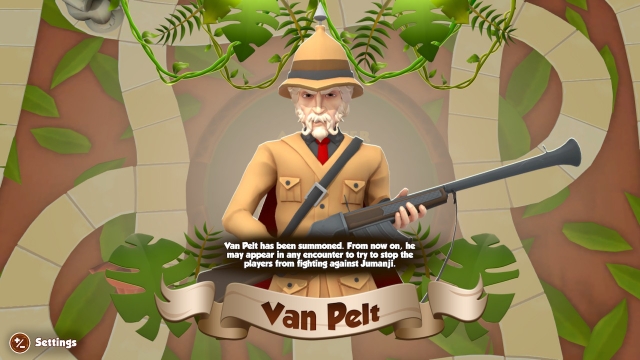 The visuals of Jumanji: The Curse Returns are dated and look like they would belong on a mobile device. The characters vaguely looked like their movie counterparts, sharing the same hair colour, but nothing made them stand out. The best-looking part was the carved tokens sliding around the Jumanji board. The soundtrack was also very bland, and there wasn't anything memorable; I had to go back and double-check that there was music while playing as I couldn't remember any. Most of the time, there were just sound effects based on the area of the map you were in. At times you hear a few drums and flutes that give it a tribal jungle vibe, but it didn't last long. 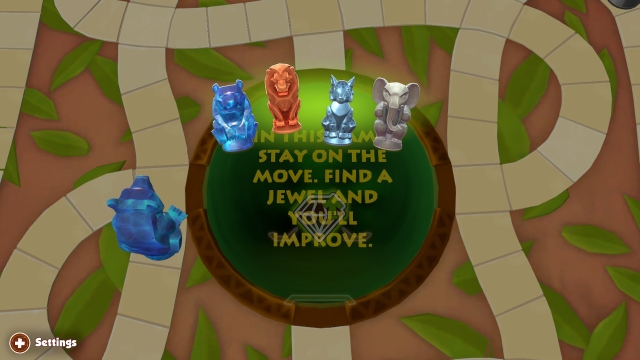 Unfortunately, Jumanji: The Curse Returns just didn't translate into a great videogame. It was very repetitive and felt better suited to play on a mobile device, where you would only play for short periods, rather than on the Nintendo Switch. Having the same riddles appear during the same round, and the characters always doing the same reaction animations when they won or lost got old pretty quick; this game is very repetitive! You do have the option to play online with friends, but after a round, chances are you won't play again. With a board game like Jumanji you would think it would feel more magical or have a greater variety of challenges instead of just clicking on a card. Or, if you are going to make it more of a card-based game, have more strategy involved. To add variety, maybe trying to avoid animals coming at you in a stampede, or a minigame where to use the card with the rope on it, you have to lasso the animal. Damaging an animal by throwing a coiled rope at it seems very odd. It's a bad sign when the child you are playing with, who loves the movie, is incredibly bored and would score it even lower than I have.

Jumanji: The Curse Returns isn't a broken game; it just felt overly repetitive, short, and not very fun. It's too bad that it didn't make the game require more strategy because it could have been much more intriguing.