Just Die Already is an odd game to experience in 2021. From the same lead designers who created Goat Simulator the game feels like an internet relic from the late 2000’s and early 2010’s. Much like the designer’s earlier title, Just Die Already is purposefully bad, full of awkward interactions and silly physics shenanigans. But unlike Goat Simulator the game does not feel of the times or on the pulse of gaming culture. What was once deemed subversive and current game design now feels clunky, played out, and not that fun. Which is unfortunate because the premise of the game is funny and subversive. In the end the game ends up being more frustrating than funny. 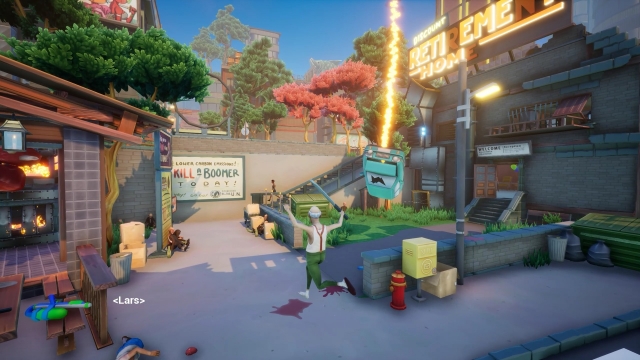 The game begins with the player selecting one of four elderly player characters who each have some unique flair. From here players are thrust into the depressing yet cartoony world of the game where everyone hates old people. It is at this point and time the game defines itself very clearly. Just Die Already really holds onto the phrase “sandbox” tightly. The game technically has objectives and technically has a story. But for all intensive purposes the goal of the game is straightforward; you make your own fun at all times. This is fairly unique in a videogame market full of massive narratives and railroaded set pieces. But for this concept to work your gameplay must truly do all the heavy lifting and this is the biggest problem the game faces. 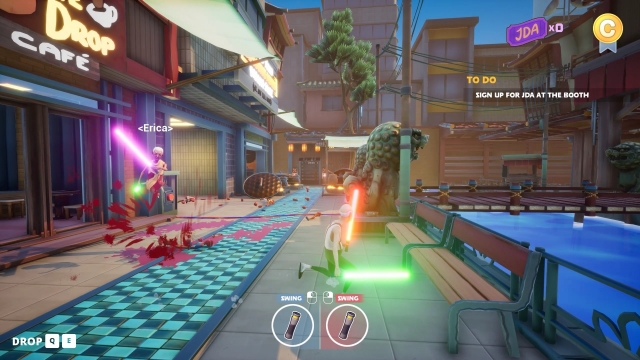 Gameplay in Just Die Already is fun but it is not substantial, complex, or multifaceted. The player bumps around a world full of trial and error engagements that mostly end with gory explosions and a fail state. This is funny and engaging for the first 45 minutes or so. It’s physics engine produces plenty of absurd moments and memorable bursts of over the top gore. Combined with the games’ surreal art direction and odd soundtrack Just Die Already makes for an excellent 45 minutes. Because this is all the game offers and to be fair to the development team this is all it is supposed to offer. Making the game a very good game to sink a few minutes into at a time for a quick burst of entertainment. But the game has no appeal as a prolonged experience because you have to make all of your own fun the entire time which is exhausting. 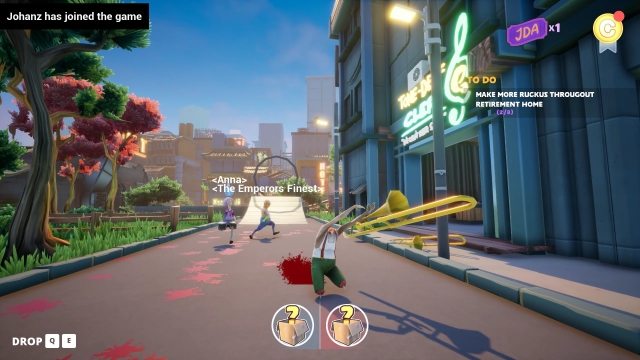 Exhausting unfortunately is the word I would use to define playing Just Die Already for more than an hour and that’s a bit of a shame. Its art direction and sound track are both solid and contribute greatly to making the game feel unique. The actual premise of the game is a great bit of dark comedy. But the game’s loose structure and lack of meaningful objectives makes it a chore to play. I’d certainly recommend playing the game for a short burst of time but anything beyond that is just a recipe for boredom and exhaustion.

While Just Die Already features a great concept, funny gameplay, and an excellent art style. Its lack of objectives and narrative really hold it back from being anything but a few minute novelty.