I have always loved watching films that feature giant monsters attacking an unsuspecting city. The Godzilla films were shown every week at midnight during summer on the local TV station when I was a child, and I have been in love ever since then. There is something so cheesy and magical about seeing a guy dressed up in a rubber kaiju suit that is so endearing! A couple of Godzilla games were released on the classic NES and later on some of the newer systems; they were entertaining but never really felt like it was up to me to protect the city from mass destruction as I was usually the one causing the destruction. This all changed when I tried out Kaiju Wars; this game has you playing as a newly elected mayor who has to do whatever it takes to save the city of Floatio from the creature attacking it and figure out why this is happening. Floatio lacks military resources but is technologically advanced, so using the resources available to you and using tax money collected from the citizens of the city, you have to construct air and army bases to deploy tanks, missiles, fighter planes, and bombers to attack the monster. Each move you make needs to be well planned so you can protect areas of the city like your military bases and the lab where Dr. Emma Wagner is creating a kaiju serum to stop these beasts once and for all; if you fail to guard them you will be defeated quickly. 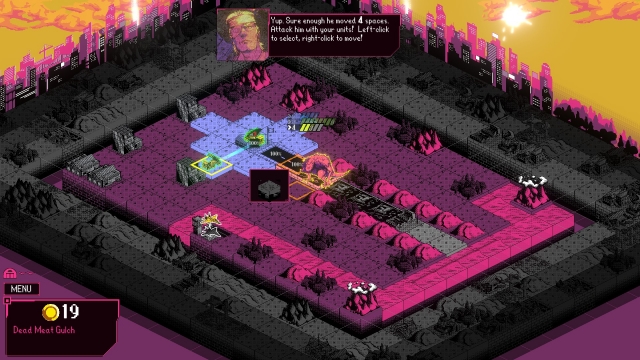 There are five acts to the Kaiju Wars story, each containing 10 missions; each mission has its own requirements that you must meet to be successful. For example, if Dr. Wagner is killed, you instantly fail the mission and will be required to start again. The longer it takes for you to destroy your enemy, the stronger they get. The monster receives special cards from a group called “Dark Project” that will help replenish their health as the battle goes on. It is incredibly frustrating to have the kaiju down to less than half of their hit points and have them all replenished in a turn. When you start your battle, you will have to build your army or air force base on the existing foundations on the map. The kaiju will automatically attack the closest building to them, so try to find a spot where they won’t smash you in the first couple of turns so you will get a chance to fight back. When you build, you can’t instantly deploy your forces that same turn; you will have to wait until your next turn which occurs after the kaiju’s. Both of you can only move a certain amount of spots; if you click the left mouse button, you can see exactly where you are allowed to move, then click on the right button to send them there. If you click on the kaiju you can see where he is able to move next, so you know which areas are at risk of being destroyed. To deploy forces, you have to right-click on the base and then select which type you want to send out; each of these costs money, so you have to make sure you spend your money on the most useful units. It is very easy to run out of money if buildings in the city are destroyed or if the people living there are scared because the kaiju has gotten too close to capturing Dr. Wagner. As you progress, you will get access to special projects that will help you out during your battle. Every turn you choose one of the three random forces shown to you, with the ones that you don’t select going back into the deck so they will show up again in the future. Some of these projects let you gain three science points to help you earn a breakthrough; if you get two of these breakthroughs, you automatically win the battle! There are also navy volunteers that will construct a harbour beside the water for free, which is helpful when you are trying to evacuate Dr. Wagner from her lab to a new location, and research grants that let you construct new bases or labs for $3. The forces you select can really turn the battle around for you, so I suggest trying to select the one that will help you out the most. 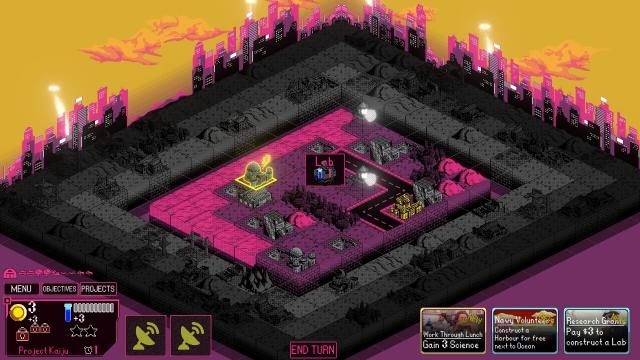 One of the coolest things about Kaiju Wars is the ability to watch old public domain monster movies like A.P.E, Attack of the Monsters (Gamera vs. Guiron), and Tarantula! from the game menus. I’m just naming a few of the available titles, but at any point, if you need a break from the action, go check out this big selection of cheesy kaiju movies that you may have seen featured on Mystery Science Theatre 3000. This was a great addition to the game that I’ve never seen featured in a title before! 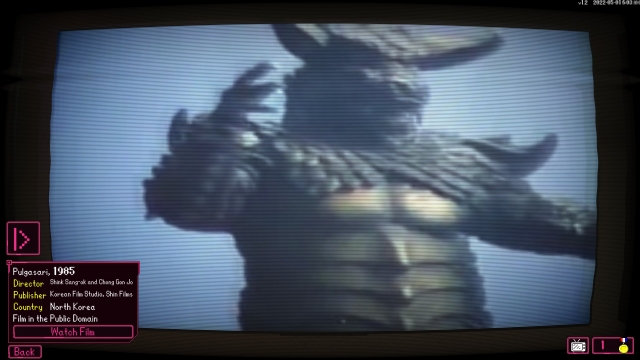 Kaiju Wars looks like you are playing it on an old CRT television, complete with scan lines and the screen's curvature. The maps have a blocky voxel look to them, with the buildings and kaiju having a hand-drawn-with-ink look to them. In the background behind the map, the surrounding buildings look flat but are bright and colourful, creating a nice contrast to the main battle area. The music in the main story is catchy, but after playing multiple missions in a row it did start to feel a bit repetitive, only picking up again once you got into a battle with the kaiju. 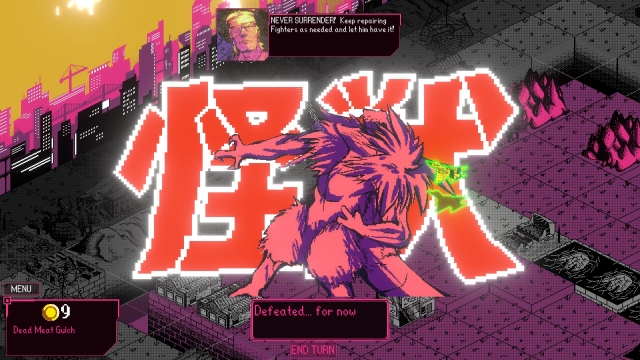 If you love old monster movies and strategic games that will work your brain, Kaiju Wars is going to be a title you will want to give a try. It could be a little repetitive [near the start]/[over longer periods] especially if you were fighting the same kaiju repeatedly, but once you progress enough to get new things like extra forces to recruit for your battle or the option to name the kaiju you discovered it added more variety to the gameplay! The addition of the classic monster movies was a great idea, and I look forward to checking out all these movies that I have missed in the past. For the record, I have actually seen Tarantula! in the past, so I can’t wait for the others!

Kaiju Wars is a great game for anyone who loves classic monster movies, old school games, and strategy titles that have you using your brains trying to protect the city, not destroy it.