Brace your mind before you play Killer Is Dead, this may very well be one of the craziest games you will ever experience. That isn't an exaggeration; Grasshopper Manufacture have completely obliterated the totally bonkers scale with its latest release, and if you think their previous games were mental - you ain't seen nothing yet. 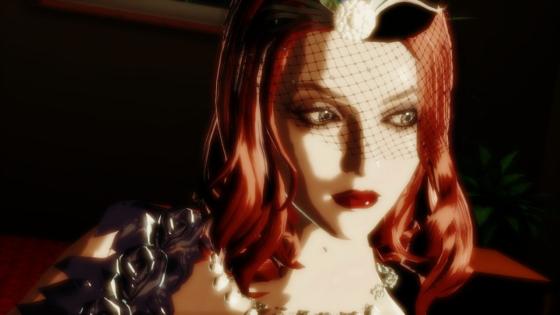 Of course, I can hardly say I'm surprised given that the title's executive director is none other than Suda 51, but even his fan favourite creation, Killer7, looks like a Disney film in comparison. Unlike that game though, KID's weirdness is confined solely to its story. I'd love to give you an informative glimpse into the narrative but frankly, I haven't got the foggiest idea what to say - even after completion. I'll give it a shot though. Just bear in mind that this is a narrative that's left open to interpretation.

Mondo Zappa has awoken to find that his left arm has been replaced by a robotic limb that can absorb blood. Suffering from amnesia, he joins a secretive organisation that deals in contract killing and this is where you come in. As the assassin, you carry out these hits, but the catch is this: human / robot hybrids from the moon (Wires) have started to infect the populace, giving them supernatural abilities. This is just the tip of the iceberg on the crazometer.

Thankfully though, the gameplay will be familiar to anyone who enjoys the hack n' slash genre. The main campaign is split into 13 stages of absolute carnage, carnage that you'll be creating with a katana and a transforming mecha-arm with more useful functions than a Swiss-Army knife. Combat is the star of the show here and whilst it may appear shallow on the surface, there's a great deal of depth that may not be apparent at first. Unlike other games in the genre, KID doesn't bombard you with new, frivolous weapons after every boss fight. Instead, the versatility comes with precision. 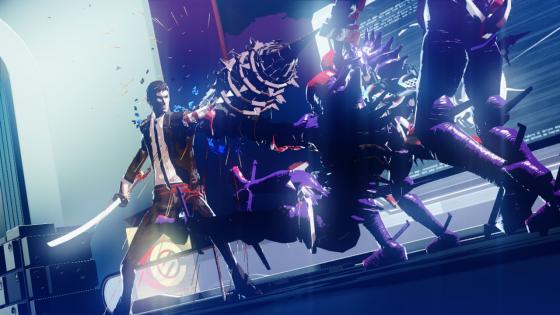 Not getting hit should be your ultimate goal. Dodging attacks builds up your multiplier that in turn makes your melee attacks progressively faster and stronger. On top of this, finishers also become available that award you with a choice of either receiving currency, health/blood upgrades or blood itself. The red stuff has a number of uses, but it's main purpose is to power your mechanical arm. Holding the shoulder button will let you switch between both weapons and the transition is seamless. There are unlockable sub-weapons for the arm too, but I'll get to how you acquire those later. Best of all is the counter system which enables you to unleash a lightning-fast flurry of attacks when you evade with pinpoint accuracy. Let me tell you, when you clear a room of enemies utilising all of these without so much as a scratch - you will feel like a badass.

Visually, words can't do justice to how spectacular KID looks. Vibrant colours leak out of every location and coupled with the superb animations and enemy design, you'll be hard pushed to find another current-gen title with such style and flair. The artists, whoever they are, deserve high praise for their accomplishments. 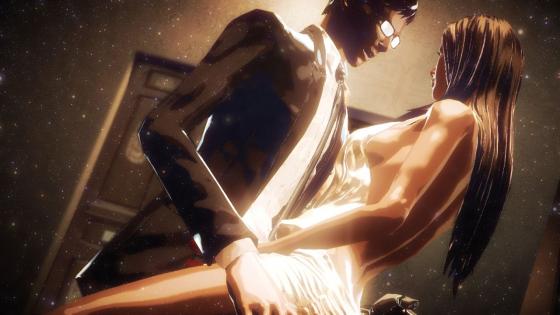 However, this is a creation from the mind of Suda 51, and depending on how easily offended you are, the following may be a dealbreaker for you. At certain intervals in the story, you'll be given access to 'gigolo missions' (that's not a mistranslation) that task you with 'wooing' women. Being a pervert and doing sexually suggestive favours for these self-proclaimed 'beauties' is achieved by giving them gifts, and leering over them like the creepy uncle at a family gathering. These missions aren't necessary, but they are the only way to unlock new weapons for Mondo's arm.

Aside from the bizarre pervert missions (that's what they should be called), there isn't much that detracts from the overall experience. There are some small instances of screen tearing and the pacing in the opening hours is wildly erratic, but both of these are small niggles that resolve themselves as the game progresses. In addition, you're likely to play way past the conclusion of the main story as the extra content is plentiful. Other than added difficulties, you'll have access to a myriad of side missions, (that are actually entertaining) new powers and the ever present urge to S-rank every mission with a perfect playthrough.

What you end up with then is, a game that's going to be as divisive as any of Suda's previous offerings. Make no mistake, this is a game that is only going to appeal to a niche audience and that's a shame, because Killer Is Dead is a fantastic slice of entertainment that deserves to be played.

Killer is Dead (Reviewed on PlayStation 3)

Brace your mind before you play Killer Is Dead, this may very well be one of the craziest games you will ever experience. That isn't an exaggeration; Grasshopper Manufacture have completely obliterated the totally bonkers scale with its latest release, and if you think their previous games were mental - you ain't seen nothing yet.

Whilst this is a great review, I've gotta say it doesn't look like my sort of thing at all. 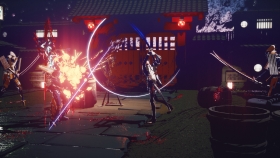