As the first real showcase of Microsoft's bulking camera that inspired so much technofear before the console's launch, Kinect Sports Rivals intends to show you just what the bundled Kinect 2.0 is capable of beyond mere media voice control. With Kinect Sports Rivals, developers Rare hope to combine immersive sports with social, competitive multiplayer, expanding upon their previous sports titles released for the Xbox 360 and its inferior camera setup.

From the offset, as you stand in front of the television, your controller has no use. The first requirement is to stick your face in front of the Kinect sensor and let it scan every facet of it, and you can have a modicum of fun as you let it. Your facial features are projected on screen in the form of surreal glowing blocks, and you can pull faces, move it around and so forth. Using this data it creates a caricature of you to use as your 'champion.'

My avatar result was pretty poor, to be honest. It got my hair colour all wrong (I'm dark brown, it gave me bright blonde...), and just having short hair, I have no idea why it decided to give me some cornrows. However, with a quick visit to the subsequent customise screen, with the right hair colour and style my champion was actually a good likeness. Now my gormless fizzog was uploaded, I was ready to take on the world. 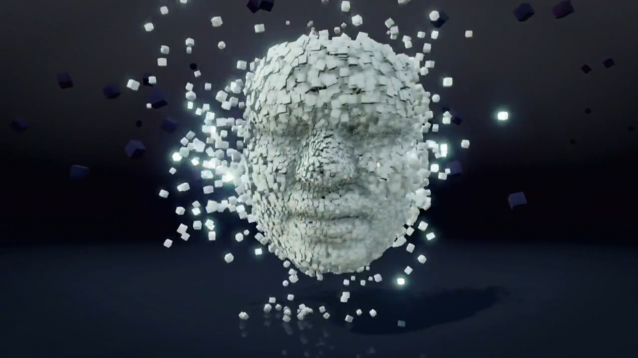 Kinect Sports Rivals isn't just a 'bring your mates round, pick up (in a manner of speaking) and play' kind of game. You're forced into a career mode of sorts, allowing only the wake racing event to begin with. The other events become unlockable as you win races, align yourself with tribes (teams, basically) and gain fans and XP. The entire game takes place on a paradise island, and you will come across three tribes hoping to enlist you into batting for their side, so to speak. Their presence is mostly redundant and pretty annoying, and your coach is a typical drill sergeant archetype. While you stand there between games, tiring yourself out, the last thing you want is for some unlikeable goons bleating on at you. Particularly as the loading times themselves before and after games are painstakingly long, leaving you hanging around like a lemon for needlessly long periods.

But I digress, onto the sports themselves. With six sports on offer, all requiring different forms of gestures, motions and stances, the variety here is fairly diverse. The first, wake racing, is genuinely excellent. As it only requires your upper body, it is the only sport that can be played sitting down. Standing or sitting, the camera picks up your movements flawlessly. Boasting Kinect 2.0's ability to detect a clenched fist, your right hand acts as the accelerator of your jetski when in this position, and releasing it slows you down. Turning your jetski around the tracks requires subtle movements, and leaning your body into a turn really makes a difference to the way your vehicle handles. The courses are well designed, and provide various jumps and hazards (mines, for instance), and when played competitively online it makes for some rather gruelling, nail-biting races.

Soon enough, you get to try your luck at the rock climbing events. Again, despite some minor camera-mapping glitches, rock climbing requires a surprising amount of skill, strategy, dexterity and patience. Rather than flail your arms wildly, the hand holds in the mountain face require your hands and body to be in a quasi-precise position, hand clenches to grab the hold and a downward motion to pull yourself up the cliff. Your rivals can be yanked off if you get close enough to grab their legs, or they can do the same to you. Competitiveness is the name of the game, after all. 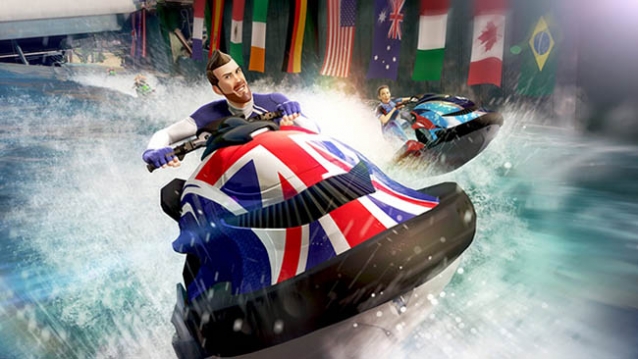 Target shooting is less impressive, but still quite fun. Holding your hand like the make-believe gun you had at primary school, you point at the screen and move the crosshairs over the targets, and shoot them in time before they disappear. While there is nothing wrong at all with the level designs, it's the latent inaccuracies of the crosshair movement that lets this sport down. That, and the simple fact that Rare have missed a trick in that you are not in control of the actual shooting, just aiming. The natural thing to do is bend the thumb to fire the finger pistol (maybe even say 'pewpewpew' as you do it), but as your target aligns with the reticule it fires off automatically, removing the one thing that would give this sport a purpose.

There is fun to be had, though, as amassing enough score during the shooting allows you to deploy an offensive laser cannon, which your opponent then has to dodge or be obliterated by. When it's your turn to be attacked, there is no cooler feeling within Kinect Sports Rivals than leaning out of the way of an attack whilst still firing at targets.

Subsequent sports that get unlocked get steadily more vanilla and generally worse. Bowling, a staple sport which lends itself well to motion-controlled gaming, is OK, but as Kinect 2.0 struggles to map legs accurately, often your position will change unexpectedly and your shot will not go as planned. Speed and spin are put to use well, however, with subtle spin applied to the ball translating pretty well on screen. 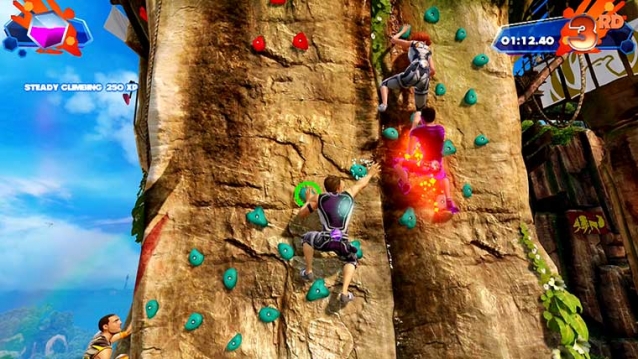 Soccer plays more like table football, with your opposing outfield players remaining on the rails throughout your attack, but controlled by your opponent when they are in possession of the ball. Mindless passing gets the ball to your main striker, and a flail with your leg strikes the ball at goal. There doesn't really feel like there's much skill or much input on the player's behalf until the opponent strikes at your goal, and puts you in the body of the goalkeeper. Going all slow-motion, you get to move in front of the ball, and even punch it out directly to your striker. All-in-all, pretty uninspiring and unoriginal.

Tennis is also a bit naff, wielding an invisible racquet as you try and spin and smash your way to victory. Neither terrible nor great, tennis is simply just... there.

The overall package is difficult to judge. What it does well, it does really well. The wake racing could be developed into a game in its own right, and shows that there is actually a lot of untapped potential in Microsoft's cumbersome device. Same for the rock climbing. However, the lack of polish on the other sports really lets the side down, as does the laggy, woeful menu system. Taking the game worldwide, the approach to online multiplayer is commendable, if a little misguided. With such a strong focus on competing with your friends and comparing your scores / times with the world, it's rather bizarre that access to the game's leaderboards require a trek into the Kinect Sports Hub – a separate piece of software only available via those furiously tedious loading screens, when a simple 'at-a-glance' approach in the manner of Trials HD would have made much more sense.

As both a game in its own respect, and an advert for Kinect 2.0, Kinect Sports Rivals succeeds and fails in equal measure. There are two real gems here, and nothing at all is completely terrible. Kinect picks up subtle hand movements with surprising precision, but struggles with simple foot manoeuvres. Menus are tricky to navigate, loading screens are far too lengthy, but I come away from Kinect Sports Rivals with a strong sense of potential, and from the wake racing and rock climbing a few interesting indie and studio games alike should spawn.

Sprinting out of the starting blocks like Usain Bolt, Kinect Sports Rivals quickly pulls over short of the finish line and soils itself like Paula Radcliffe. Two of the six sports on offer here pack a real punch, with the others lagging way behind. A valiant effort, if not a lot more else. A genuine attempt at highly competitive sports are hampered by a needlessly convoluted interface. 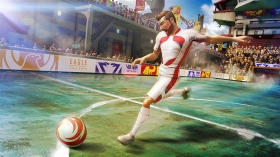