Disney and Square-Enix, two very different companies. One, a creator of cutesy, lovable characters and worlds filled with cartoony beauty and tales of friendship and love. The other, maker of some of the most epic RPG titles ever released, filled with deep involving and often heart wrenching stories and some of the most innovative game play around. Combine these two forces and what do you get? One of the most critically acclaimed RPG series' around that's what. The Kingdom Hearts series currently comprises of two main numbered titles as well as offshoots to the story spanning the Gameboy Advance, Nintendo DS, mobile phones and now the PSP. 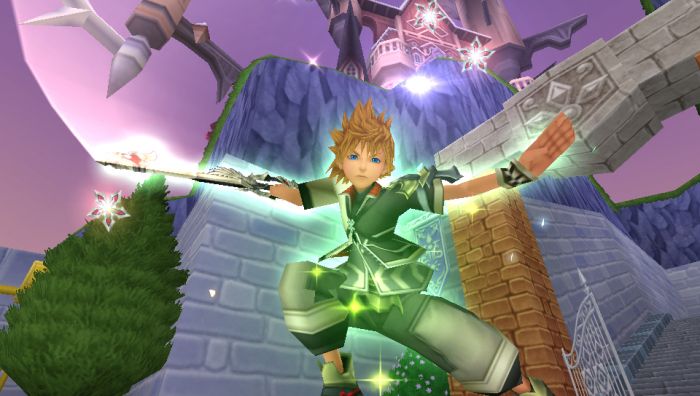 Kingdom Hearts: Birth by Sleep is a prequel to the numbered series and sets about explaining the roots of the original Kingdoms Hearts main story line. Birth by Sleep does this by telling its story in 3 different story-lines, one for each of the games main characters, Ventus, Aqua and Terra, masters of the KH's signature weapon, The Keyblade.

Whilst playing the original games is recommended you can however get away with skipping forward to Birth by Sleep first but be warned, Kingdom Hearts as a whole boasts a large and in depth story that even avid followers to the series get confused over. There may be a few occasions where certain people or events will be mentioned in passing and you won't have a clue what they are talking about. These event or character mentions won't impact negatively upon the game if you have not played KH1 + 2, they are there more so to familiarise players once again with the setting and drop subtle story hints to those who have played the numbered series. 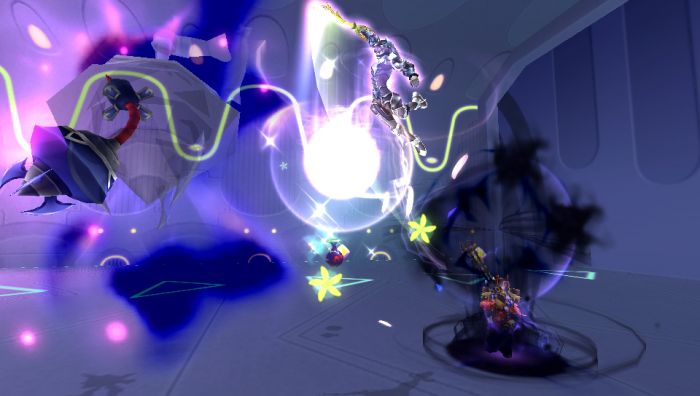 Without giving too much of the story away, throughout the game Ventus, Aqua and Terra will have to travel through some beautifully designed Disney themed worlds ranging from Dwarf woodlands featuring Snow White and the Seven Dwarfs to Castle of Dreams featuring Cinderella. Within these city's you are able to pick up mandatory missions to aid the residents with whatever they are struggling with. These missions range from escorting people away from danger, finding treasure and killing a certain amount of the games enemy, the unversed. Much like the "Heartless" enemies of previous games, there are many different forms of the unversed who will follow you around relentlessly just begging to be torn asunder by your Keyblade. Which is no way a bad thing as any excuse to use the battle system in Birth by Sleep is definitely a good thing.

Kingdom Hearts: Birth by sleep features one of the most comprehensive and down right fun battle systems I have experienced in an RPG to date. The Kingdom Hearts series has always had a good solid battle system but Birth by Sleep seems to improve the formula tenfold. 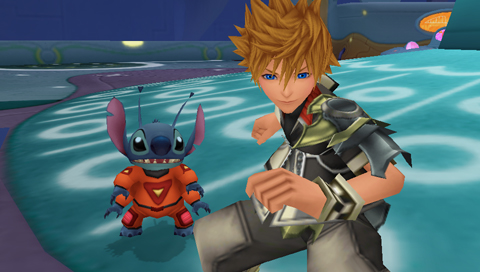 Your simplest and often best manoeuvre is to hit with your keyblade, this can be done by pressing X repeatedly. By pressing X multiple times, you are able to string your hits into combos adding to the overall damage of the attack with each consecutive hit. As you level up your choices of combo expand and the damage potential gets bigger. Battle in Birth by Sleep is not just about mashing the X button however, you have tonnes of commands that you can utilise throughout the fight also. Commands are selected using the d-pad whilst you are in a fight and the triangle button executes the command. Once they have been executed, your in battle menu cycles automatically to the next command and gets it ready to use whilst the active time bar replenishes enabling you to use the skill again.

Commands may be a bit thin on the ground to begin with but there are many ways of obtaining new commands and abilities. You are able to buy some through the many Moogle shops you come across on your travels, you can find them in various treasure chests hidden around the worlds or some of the unversed drop them once defeated.

Half the fun of the Birth by Sleep battle system is you can mold it to your liking, want to focus on fire spells and melee attacks that's not a problem, like to make sure you are healed and prefer to use magic over melee, that's also fine. In your command deck within the main menu you are able to customise your abilities to whatever you want them to be. The combinations are endless and really makes you feel as though you have complete control over your character. Your commands can also be leveled up and combined with one and other to form newer, more powerful and sometimes surprising attacks, spells and abilities. 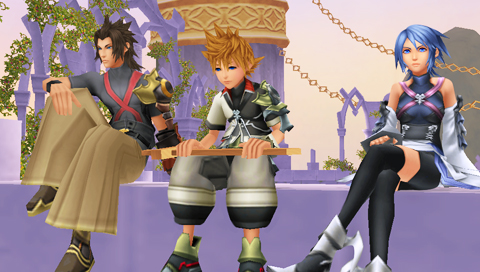 Adding yet more depth to the system, you have a meter on the side of the screen, every attack, command and ability you use pushes this meter up, depending on what you used to fill the meter your character may enter a special command style. This alters your attack and other stats temporarily in your favour but changes your attack style to one which is relevant to the style of play you have been using. Allowing you to nuke everything in your path with some heavy magic or just cut your way through the lot with exaggerated, more powerful attack strings.

Yet more depth is added with the use of attacks called shotlocks, these are tricky to use but give great results against lots of enemies grouped together. Last but not least is the D-Link system. Each character can forge these links with characters they meet along their travels. When you use D-Link you gain the use of the other characters move-set and special abilities for a limited time. It's an interesting mechanic that allows you to mix it up a bit when fighting the hoards of unversed coming at you. 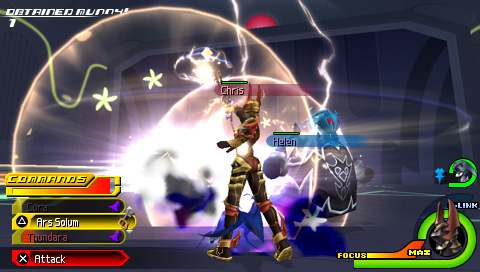 Keeping along positive lines, Kingdom Hearts: Birth by sleep has some of the most incredible visuals I've seen on a PSP so far. The opening movie literally made me sit there and think wow, this looks beautiful and the in game graphics are pretty spot on too, from nicely designed if not a little bland in places locations to superbly detailed characters of both Disney and Final Fantasy varieties.

Accompanying these gorgeous visuals is a top notch soundtrack. Utada Hikiru lends her voice to the game once more, this time with Kingdom Hearts 1 theme song, Simple and Clean. The music fits beautifully in the game and really immerses you in whats going on.

Whilst Kingdom Hearts: Birth by Sleep has a lot of great points to it, it isn't without its bad points. A Kingdom Hearts staple, dodgy camera angles are back and here to make things awkward for you. It is possible to move the camera around but its still annoying when you end up trying to figure your way out from a forest only to keep running headlong into trees. As previously mentioned, the locations and world can look a little bland in places and but its not something that will ruin the overall experience. The biggest problem for me is the loading times.

These can be seriously horrific at times, there is an option to data install to your PSP where you can install data in 3 differently increasing increments which is something I would recommend doing as it does resolve the issue somewhat but even still after that, there are some some nasty delays. 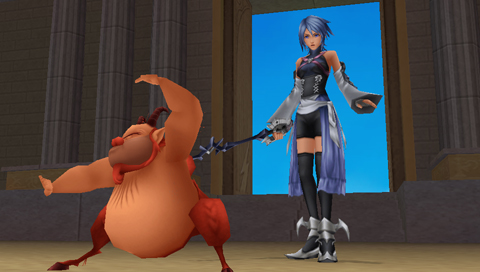 GR8 DEAR BUT CAN U TELL ME THE LINK WHR TO DOWNLOAD THIS GAME OR BUY .GR8 POST KEP IT UP M8