When I was younger and studying the Three Kingdoms period of early Chinese history, I don’t think at any point I wondered to myself: “What would these ancient statesmen, generals and kings look like as Japanese schoolgirls in tight clothing?” Yet that question, inexplicably, has its answer in the shape of Koihime Enbu.

This 2D fighter is based upon the adult visual novel and “strategy game” Koihime Musō, set in the Three Kingdoms Period of China (around 200 A.D.) and drawn heavily from the famous novel set in those times The Romance of the Three Kingdoms. Koihime Musō, as well as its subsequent anime and now videogame, take the major characters from this period and transform them in teenage (or young adult) women and have them fight each other in what is a mock retelling of the famous tale.

There is a battle raging inside of me when it comes to this game, because despite its obvious service to fans of a certain genre of both anime and game, Koihime Enbu is actually a very competent fighting game. Each of the playable characters has a roster of impressive moves and combinations that can be pulled off with relevant ease, while the animations are fluid and attractive on the eye. 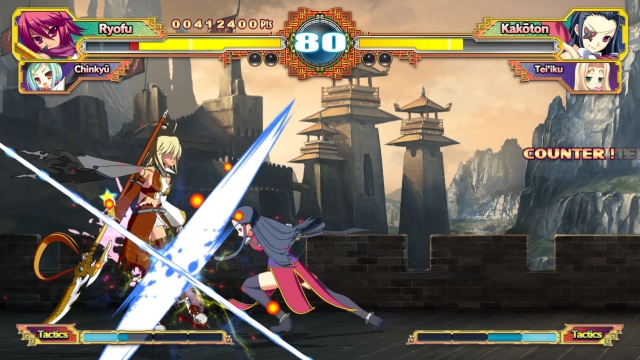 Graphically the game doesn’t go all out to impress, yet its 2D style is both appealing and well-designed. The backgrounds for each stage are nicely animated and detailed, and for those with knowledge of either Romance of the Three Kingdoms or Koihime Musō, represent the setting well. I was surprised that, given that each fighter has their Japanese name, I could recognise them by their design and costume. Familiar names like Guan Yu and Cao Cao rose up in my memory from both the weapons the fighters wield and their general mannerisms. Credit where credit is due, the game has done its research.

Koihime Enbu features your standard affair for most fighting games - Training, Arcade and Versus modes. Players may also attempt a Scenario mode, in which each fighter is given a backstory and progresses through a number of fights tailored around the history of the character they are portraying. It’s a nice touch and I found myself more interested in trying to work out which scene from the famous historical novel was being replicated rather than listen to the voice acting. The Versus mode suffers from some bugs, whereby two players cannot seem to fight each other if one is using a controller and the other a mouse and keyboard. No matter what configuration I tried I couldn’t get it to work.

Fully Japanese, the voice acting is also something to be praised. None of the cast ham it up or really phone in their characters - they all do a great job in giving what are essentially 2D sprites a little bit of life outside of the Koihime Musō anime. Without their inclusion, the game would certainly be of poorer quality and having to scroll through text-box translations would have been a dull affair. The music, which is predictably fast-paced, upbeat and electric, can get a little grating after a while, especially during its shrill moments. 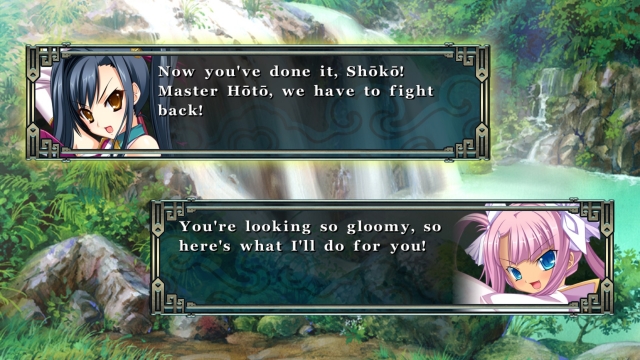 The stories in the main mode can be a little bland at times, and dumb down the real historical and legendary reasons behind the meeting of characters (the famous warrior and mercenary Lu Bu, for example, is reduced to a sleepy and hungry layabout who just so happens to be good at fighting). Without having seen Koihime Musō, though, I can’t really criticise the game for drawing upon what may simply be the backstory from the manga and anime.

Unfortunately, due to this game being originally designed for the PS3 and PS4, the PC port is also slightly confusing when it comes to button mapping. It was difficult to coordinate the prompts on-screen (left over from their PS defaults) with the buttons on my wired controller, and it left me having to mash buttons in a few rounds before I figured out how to properly do some moves. Once you have the hang of it, however, Koihime Enbu is a rewarding fighter. Combinations and opponent juggling appears to be the order of the day, as a number of characters’ moves focus on lifting your opponent into the air. Grapple moves, dodges, sprinting and second character special moves all add to an impressive array of techniques that can be used to grant you victory. The game will also score your fighting and give you ranks to push the player into doing even better next time.

Koihime Enbu is a game that will challenge your expectations. When looking at it on Steam it would be easy to lump it in the same category as a number of lazy anime and manga-based titles. Don’t let that first impression fool you, Koihime Enbu is a surprisingly well-designed fighter and, while it might not shake up the industry, has very little wrong with it and quite a lot going for it.

Koihime Enbu is a surprisingly well-designed fighter and, while it might not shake up the industry, has very little wrong with it and quite a lot going for it.