Game of Thrones, which I’m sure we all watch by now, is notorious for its continuous plot twists and characters with ulterior motives. Every time I watch it, I know I can’t relax too much, as the next betrayal or murder will be just around the corner. I can’t say that Legends of Eisenwald is exactly like Game of Thrones, but that restlessness and distrust that every character inspires is still present. However, the way the story of Legends of Eisenwald is presented lacks the flair the show has. Even though you still get that feeling of melancholy and desperation, and know that you can’t trust any NPC with personality, you can still look at the mechanics and feel like a child again, knowing that they’re far from being mature and in tune with the tone of the story.

The game that comes to mind when looking at Iis none other than the prodigal Age of Empires. There’s plenty to discriminate between one and the other, indeed, but their affinity is clearly visible, particularly in the campaign and visuals. Legends of Eisenwald does not require you to manage cities and distribute resources, commerce with other factions or create battle strategies with your different battalions. It is much more narrative-focused, putting emphasis on the individual story of your character, with a clearly delineated story arc, but not so much personality. Namely, it is clear what drives the characters throughout the story, but they feel quite empty and their dialogue lines are bereft of charisma.

This is perhaps one of the main problems in Legends of Eisenwald: the dull and uninspired exposition. As your party travels across the late-medieval lands of Eisenwald — in Germany, apparently — you’ll find a plethora of people to talk with. You’ll discuss about politics, gossip about incestuous relationships, seal deals, buy equipment and more. However, there’s a lot of meaningless text and no voice over. It seems that the nobility protocol of interaction has thoroughly been transposed into this game, which feels that most of the things they’re saying could be massively summed up, with little to no significance in setting the world or the story. What’s more, although the grand scheme of the story has its perils and thrills, the minutiae of the drama that allows it to happen is completely unimportant and superfluous to the player, and the exposition makes it even duller altogether. 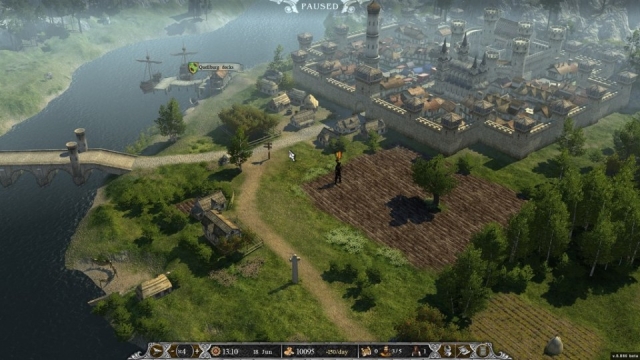 The storyline I followed is one of revenge, where I, a Baroness, was betrayed by my bannermen and (now former) allies, who killed my whole family while I was away from the castle. She sets out to seek revenge and army to reconquer her lands, and make the traitors pay for their crimes. Throughout her quest, she meets plenty of characters and hear plenty of stories that intend to add flavour to the world, but the way this quest is told makes them counterproductive. In many occasions, it seems they are side plots that the developers included to give you more play time and simulate the feeling of choice, whereas no matter what you decide to partake in, the choices are devoid of meaning. It’s a pity that this fantastic world was seasoned with dull exposition, as there are enough characters and theatrics to produce an enticing story.

Legends of Eisenwald has three different storylines. Depending on who you choose at the beginning of the game, a Knight, a Baroness or a Mystic, the story of the game unfolds differently. As a Knight, your assets are melee-based; as the Baroness, you wield either a bow or a crossbow to take down enemies from a distance; and as the Mystic, you can use magic to modify stats in your favour. The characters that join your endeavours along the campaign are variations of these: pikemen, cavalry, healers, etc.; and any variation of these that you can achieve as you level up and find loot to customise your characters. Of course, these characters have different abilities and work best in different situations. 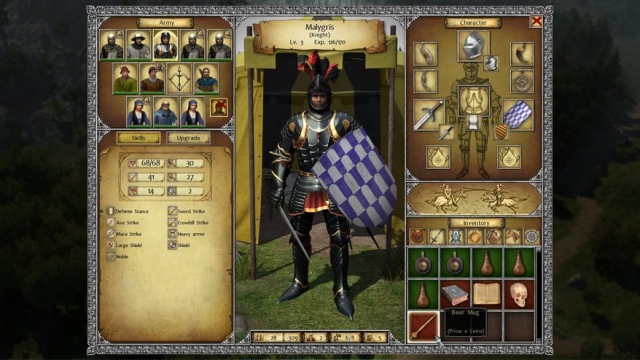 The combat in this game can be, at first, somewhat obtuse due to an apparent lack of depth. During the first stages of the game, it is true that the combat is simple — way too simple, as each character can only attack the nearest enemy to them. However, as you gather up advocates to your cause and they start gaining experience, the abilities that they acquire leave room for a much wider combat system. My strategy was always based around pikemen, who deal special damage if an enemy charges towards them. I made sure I bought plenty of armour and weapons to strengthen them, and with a couple of boosts by mages and a reliable line of archers behind, I had an impenetrable front line that withstood any attack.

Nevertheless, all battles ultimately can become negligible, as the slow turn-based system can alienate many. I found the inclusion of a button that allows the battle to resolve itself really odd, which becomes particularly useful in those that are too challenging. It’s not that I don’t like a good challenge, it’s that I didn’t find battles and their outcome rewarding enough to be bothered to knuckle down and think every move through. I spent the first great part of the game doing so, but after a while, I decided that I was wasting my time.

If I had been able to keep all characters throughout the game, maybe I would have been more attached to them, but in the first five hours, my party — which I had spent money and care on — dispersed twice just for the sake of the story, making it feel quite artificial. This made my party all the more indifferent to me, as I saw them as heads for hire, rather than loyal allies — only loyal because they didn’t have a brain; I bet they would have stabbed me in the back if they had been able. This was even more noticeable when one of my best men decided not to fight for me because I didn’t have money to pay for his services. This takes me to the unexplained economy. The way you gather money from conquered towns and fallen enemies is soon picked up, but it is difficult to notice. You start off with a ton of money, which quickly evaporates if you hire many mercenaries. However, if you keep a considerable amount of towns under your control — by fighting the mob that’s in control of them —, you can collect taxes from them. Winning battles will also reward you with money, but not enough to rely your economy on them. This constantly keeps you on the lookout for any town that may have been retaken by rebel factions, and puts a constraint on what you buy, making you focus on paying the mercenaries, rather than providing them with the best habiliment, particularly if they all vanish as you finish the level.

It is in terms of visual style and level progression where we see the similarities with Age of Empires (maybe with Baldur’s Gate too, but in lesser measure). Whereas the music is excellent — a sort of Celtic tune to them that is very suggestive of medieval times, the visuals are obsolete; they’re just too functional, which may present as a problem. The scale of people and building is strangely disproportionate, and although I understand that the sprite of my character is symbolic and represents my whole party, I can’t help to think that Age of Empires II, a game from 1999, fared better in that regard. All my main points of criticism can be encapsulated in this last statement, as Legends of Eisenwald feels like an anachronism.

Legends of Eisenwald would have been an incredibly good game had it been made fifteen years ago. The combat mechanics are dated and lack the depth that we see in modern days, whereas the introduction to the mechanics and the exposition of the story are neglectful and unentertaining when we frame it in modern-day game storytelling. It’s not all vicennial-old trends, but what is not isn’t significant enough to make a hit. I didn’t love this game, but some child inside me was awaken with feelings strangely familiar. Videogames have evolved a lot in the past 15 years, but Legends of Eisenwald is still stuck on the late ‘90s.

Legends of Eisenwald (Reviewed on Windows)

Legends of Eisenwald would have been an incredibly good game had it been made fifteen years ago. The combat mechanics are dated and lack the depth that we see in modern days, whereas the introduction to the mechanics and the exposition of the story are neglectful and unentertaining when we frame it in modern-day game storytelling. It’s not all vicennial-old trends, but what is not isn’t significant enough to make a hit.