TT Games have finally realised what gamers have known since 1997 - it’s good to be bad. Because in a change from the norm, the latest DC LEGO title isn’t focused on Batman! Instead, it’s LEGO DC Super-Villains, some of the best characters in comic books. True, the majority of them are Batman villains, but still, it’s nice to not focus on Bruce. And yes, Marvel has some good villains, but those are all Spider-Man villains and Doctor Doom.

The story sees the Justice League sent somewhere by the mysterious “heroes” calling themselves the Justice Syndicate. Since the new do-gooders seem less interested in stopping crime than the old ones, the super-villains decide to run rampant. That includes Joker, Lex Luthor, and of course the rookie. 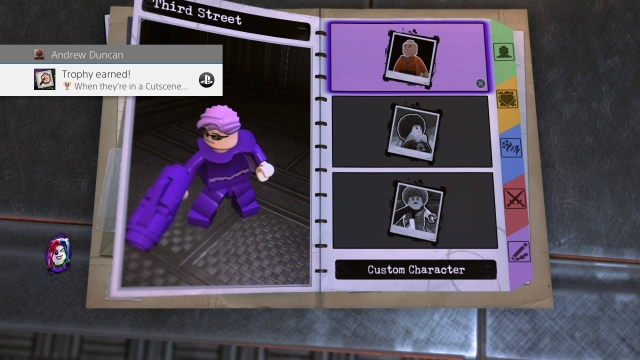 Of course, he had to represent Third Street

You’ve never heard of the rookie? Well then you’re in luck, as it’s a voiceless custom character that you create! Choose from a bunch of different parts and colours, a weapon if you want it, super speed if you’re keen… Then you get introduced as the newest super-villain in the prison! Until there’s a jailbreak.

Of course, before you get to do all of that, you have to contend with the one minute and 10 seconds of unskippable logos at the start of the game, and long loading times. Half of the cutscenes are unskippable too, but that doesn’t matter until you’re trying to go into Free Play mode later. Not content with just making you wait over a minute to get to the main menu of the game, TT Games has put in some random crashes to make you wait even more. 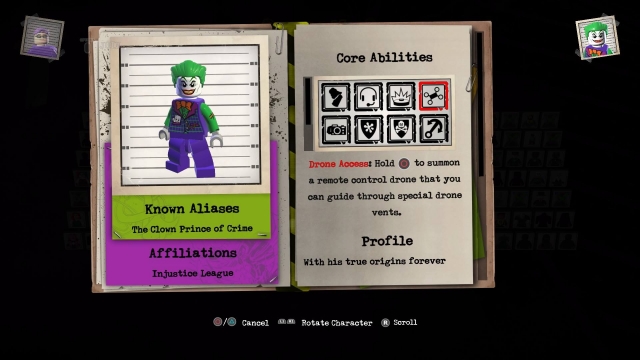 Oh, and that’s not counting the amount of times you’ll have to exit out of the game (not the level, as your checkpoints won’t count!), because one of the characters (yours or a boss) had become stuck and unable to free itself. Or when the quest markers straight up disappear in the hub world, or you think a sidequest has glitched because it didn’t tell you exactly what you had to do, or you rage quit because the gliding races are stupidly difficult compared to all other races… 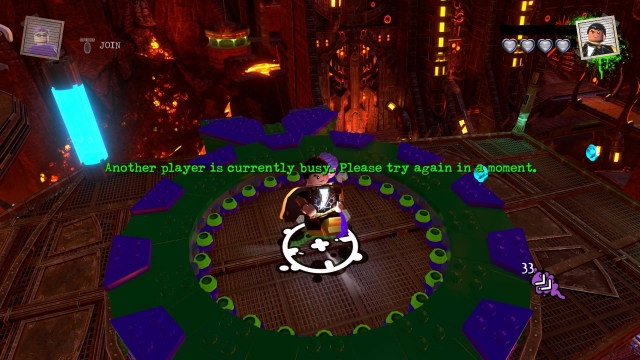 And what the hell is this? The other player DROPPED OUT AND IS NEXT TO ME

I certainly had some issues with LEGO DC Super-Villains. It’s a fun game, but there’s just so many bugs that I was quickly dreading coming back to the game for another play session. At 15 hours, I had finished the story and was only at 38% game completion, if that’s any indication of how much I had to play this game. Even exploring the hub in co-op and both of us completing races and quests, it was a huge chunk of time.

The hub world is made up of Gotham City and Metropolis (and somehow Smallville), so it’s pretty massive. Even flying, it takes over a minute to rush from the very top of the map to the very bottom (smaller than LEGO Marvel Super Heroes 2, though). That’s not even counting the second, albeit smaller, hub world. It’s packed with races, sidequests, collectables, hidden character tokens, and just a whole lot to do. Unfortunately, I think that’s where the problems lie. 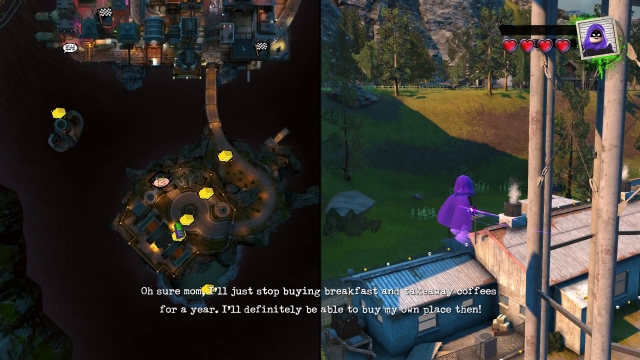 Oh yeah, that kid's face is Johnny DC, old mascot of DC because they didn't have a Stan Lee

TT Games appear to have been using the same engine for a while now. The LEGO models look brilliant, but it keeps getting pushed more and more every year, and there’s only so far you can go. Just look at Bethesda’s Fallout/Skyrim engine - it gets a lick of paint, some refinements, but there’s still mounting issues. If you read my review  of LEGO The Incredibles, I highlighted the same crashes and requiring to restart levels, and in my review of LEGO Marvel Super Heroes 2 I talked about side quests breaking in co-op.

Speaking of The Incredibles, the speedster in that game could run on water - the multiple speedsters in LEGO DC Super-Villains however cannot. This is a weird thing when it was a mechanic in the most recent title. But, you might counter, perhaps there’s not much water, or there’s no need to run across it. I thought that, until one of the races requires a speedster and part of it involves swimming through checkpoints. While on the subject of water, there are water-based characters, but absolutely none of the game takes place underwater - at that point, you’re literally adding them in just to boost the character count. 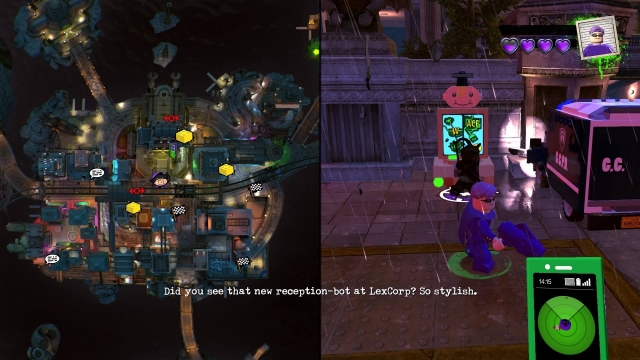 There are 146 characters and 50 vehicles to collect. Obviously, a lot of the characters have abilities that are the same as others, but most have some slight differences. Unlike LEGO Marvel Super Heroes 2 - who needs half a dozen identical Iron Man suits?! Some buttons have multiple abilities mapped to them, which can be annoying if you’re not in the right “context”.

Almost every major character in this is also voiced by their animated series voice actor, in a nice touch. Well, not nice for the people who spent two games voicing them only to be replaced by more famous actors, but still…

There are certainly enough characters

Mark Hamill is, of course, fantastic as Joker, Tara Strong, Jeffrey Combs, Travis Willingham, Gina Torres… The cast list is simply fantastic, and a joy to listen to. I was even surprised by a few, such as Armin Shimerman, Brandon Routh and John Barrowman! The music is also good - at first. If you’re flying around the hub trying to find something, and you drift in and out of the “Metropolis Music” area, you get it starting over and over again until you either stay in the area or move.

I know that I’ve spent a lot of this review talking about what this game doesn’t have, so I’ll mention some things it does. For instance, certain villains can call upon henchmen that are scattered around some levels, to solve certain puzzles. It’s an interesting mechanic, and one that simply wouldn’t work in past LEGO games. 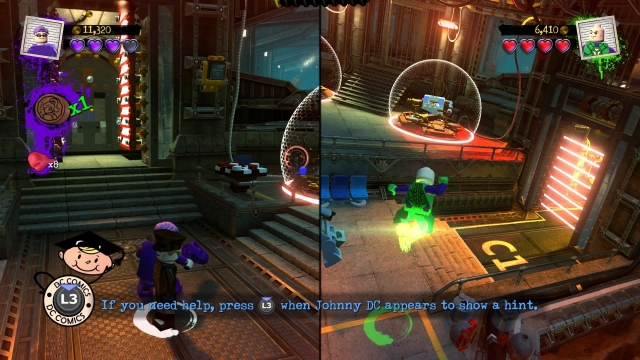 Oh, and I completely forgot to talk about how I had to turn off Hints because that message came up ALL THE TIME

I really wish that LEGO DC Super-Villains had fewer bugs, because the loading times I could have forgiven, but those in conjunction with the bugs, I can’t recommend that you buy this at full price. It’s a fun experience, and it’s frequently hilarious with a decent storyline - but those bugs… It also doesn’t bring a whole lot different to the table that wasn’t seen in LEGO Batman 2: DC Super Heroes.

I want to like this game, but the same bugs keep coming up time and time again in these LEGO games, which made me dread playing it. Get LEGO Batman 2: DC Super-Heroes, and wait for a sale.