Traveller’s Tales and LEGO have been together hand-in-hand for years crafting creative and imaginative worlds based on some of the biggest franchises. Now with their first leap into the toys to life genre, it certainly feels like everything has been building up to this. The portal is open and there’s a multiverse of worlds available to players both physically and in-game. This is LEGO Dimensions.

Just like Activision’s Skylanders and the Disney Infinity series it all begins with a starter pack. Within this you get; the Dark Knight himself; Batman, and his transforming Batmobile, the wizard of Middle-earth Gandalf and LEGO Movie’s master builder Wyldstyle as well as the main base for the dimension jumping and all the necessary pieces to build your own portal featured in the game. Now, in all fairness you don’t need to build any of these, but where’s the fun in that? The joy of LEGO is right there before you even launch the game and for someone like me, who hasn’t played with LEGO in a long time, jumped straight into the construction of my new fangled portal. 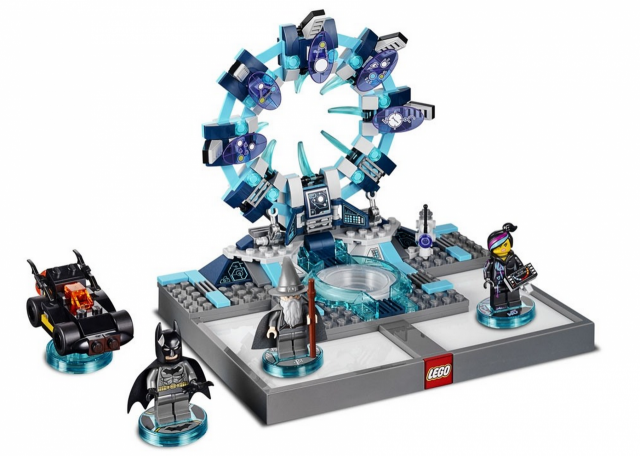 The story opens with Lord Vortech, a new villain, who exploits the power of the multiverse to make all the universes collide. By creating rifts within the universes he captures the allies of Batman, Gandalf and Wyldstyle, all who were simply minding their own businesses unaware of each other's existence. Now, our new heroes must work together and save their comrades and the universe. It’s your traditional heroes vs villains story, but it sets the stage for a thoughtful creative story which has you work with some of your favourite heroes and fight against villains across a magnitude of franchises.

Those who have played any previously released Traveller’s Tale LEGO titles will feel right at home. You’ll be entering familiar ground, only this time you’ll be welcomed with more interaction and more worlds to explore. For those who haven’t and are making their first foray into the franchise, then you’ll be in more of a treat than all previous LEGO titles. At the heart of it the games follow the same formula. Each of the characters have their own abilities that are required to complete a variety of creative puzzles and fight against oncoming enemies. You’ll be switching between your heroes in-game and in the real world using your dimension base throughout your journey. Each minifigure included comes equipped with their own base and these are what are necessary for bringing your characters into the game. This is not only a simple way of getting your bought characters into the LEGO world, but also somewhat an annoyance; losing the character base will also result the loss of the character in-game - which is no fun at all, nonetheless as long as you take care of them you’ll have a good time. 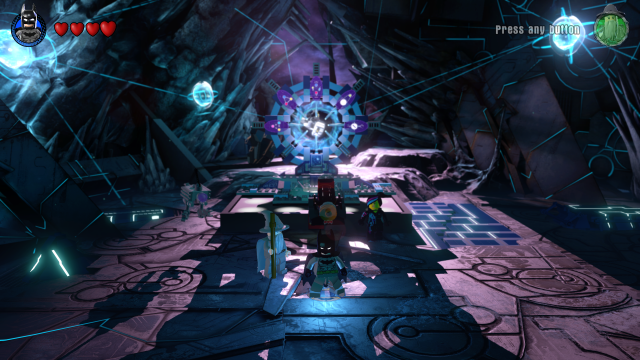 Now before running off to the store for the starter kit and jumping into a world of dimensions let’s be clear about the future of LEGO Dimensions. It is different to other toy to life games and the included portal base isn’t just for show but is mandatory for the game; you can’t simply purchase the game standalone - so with that knowledge you’ll need to make an initial purchase of £85. However, even with just the starter kit everything is entirely optional with very few restrictions. With the story following Batman, Gandalf and Wyldstyle you're not forced into purchasing anything else, unless you really want to.

With big franchises behind them, TT games have pulled out all the stops to cram in so much fan service that it leaves you wanting more. You and your heroes will be able to traverse LEGO-themed worlds of The Simpsons, Dr Who, Lord of the Rings, Ghostbusters, Back to the Future, DC and more. What makes this so great is that it goes beyond simple self-contained worlds, it takes the term crossover literally by having heroes and villains jump in and between. Take The Simpsons world for example: upon entering the town of Springfield you’ll not only see a collection of cameos, but you’ll soon discover something amidst, as the Power Plant is being attacked by Lord Business from The LEGO Movie and that’s just one small part of a bigger level to explore. The same goes for all the worlds visited within the story as things will take a turn of the unexpected and it’ll be worth keeping an eye out for all the hidden details within. It makes the LEGO worlds wonderful throughout. Every crossover fits neatly and seamlessly and the LEGO spin on top of the franchise adds humour and amusement for all ages. Even someone as childish as me found myself chuckling at the daftness and was excited to see what was next in the dimension jumping. 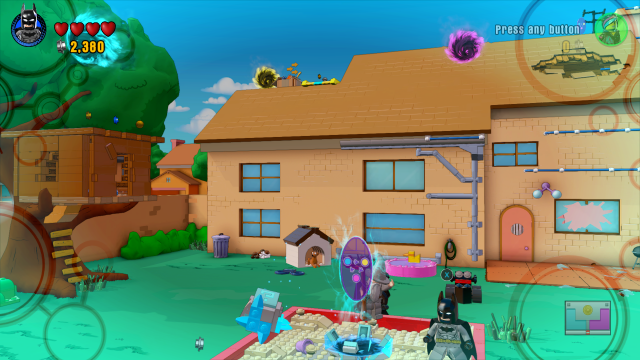 Keystones of power scattered throughout the dimension.

While the game controls identical to previous entries, the portal base introduces a whole bunch of new mechanics. In game you’ll discover keystone's, each of these work differently bringing a new level of power into the game. With these you can solve a variety of puzzles, with the base changing in colour you’ll be able to jump in and out of portals to get to unreachable areas or unlock doorways and switches by matching corresponding colours, even make your character big or small. It sounds simple, but combined with LEGO building and the use of your heroes own unique powers such as Wyldstyle’s master building, it makes for some satisfying puzzle solving with more creativity than even the most mature of puzzlers.

As this is a toy to life game, the term “comes at a price” can best describe LEGO Dimensions and while I don’t consider it something negative, it should be said if you plan on experiencing everything that is there to offer then brace for some big purchases. The story will take to all the available worlds, but only offer a sample, taking you through a linear path for story purposes. You’ll still get to meet all the wonderful characters from Doc and Marty from Back to the Future to Homer from The Simpsons and of course The Doctor from Dr Who all lovingly reimagined in LEGO form and superbly voiced by the actors themselves, but getting your chance to play as them is a whole different story.

Within the hub you can enter an area containing all the available worlds, these worlds can only be entered if you own a character of that dimension - see where this heading? Having Batman, Gandalf and WyldStyle automatically grants you access to their respective worlds, which furthers your adventure - each being open and having their own sidequests and heroes to meet and help, but if you want more, prepare to purchase the additional Level packs, Fun packs and Team packs costing upwards of £30; cheapest being the Fun pack at £15. 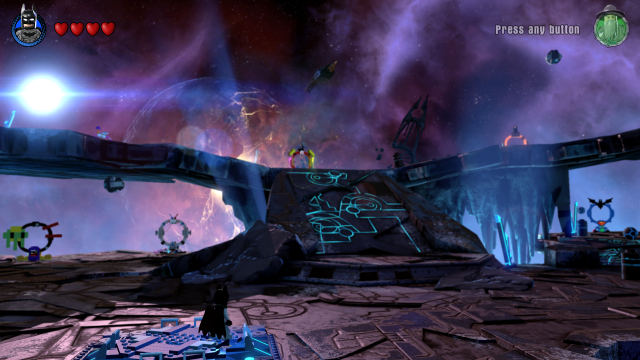 All the potential worlds that can be entered.

Placing an additional character on the base makes them playable, allowing you to enter their own world, but you must keep them on the base alongside everyone else to play them, meaning that you’ll have to keep switching between them all throughout, fortunately the base does support up to seven characters. However, one nuisance with this is that certain interactions in the world, even within the story, require specific characters, so for all those completionists out there, you’ll have to purchase a lot of packs or borrow a friends character in order to get all those collectables and gold bricks. Still, these are entirely optional and it does not hinder the game at all.

Altogether LEGO Dimensions is the best LEGO game to date. It is just simply a joy to play and with the big franchises behind it, there is certainly a huge amount of longevity within, but only if you are willing to pay the price of admission. The move to the toys to life genre is a smart one for LEGO and with some of the available packs including: Dr Who, Portal, Jurassic World, The Simpsons and with more on the way, it’ll make any LEGO collector foam at the mouth and dive in, even if it’s just for the toys. Still, with just the starter pack alone, you’ll be in for a huge dimension jumping tale that is just a blast.

LEGO Dimensions (Reviewed on Xbox One)

LEGO Dimensions is the best LEGO game to date. It is just simply a joy to play and with the big franchises behind it, there is certainly a huge amount of longevity within, but only if you are willing to pay the price of admission. The move to the toys to life genre is a smart one for LEGO and with some of the available packs including Dr Who, Portal, Jurassic World, The Simpsons and with more on the way, it’ll make any LEGO collector foam at the mouth and dive in, even if it’s just for the toys. Still, with just the starter pack alone, you’ll be in for a huge dimension jumping tale that is just a blast.

New LEGO Dimensions Expansions Include The Powerpuff Girls and Beetlejuice

Sonic, Adventure Time and More are on their Way to Lego Dimensions

We have this. Its an amazing game however its just going to become a money pit. £30.00 for a level expansion and £15.00 for characters.

I know and am pretty sure that is why I am not as bitter as I would be if it was another franchise. However it still doesnt make me feel happy for paying this much for Levels within the game.

Mind you, I bet you "BRICKED" yourself when you seen the price of the large pack :)

Ha I see what you did there! I must admit I am tempted by the Joker pack. Cause you know, it's Joker! 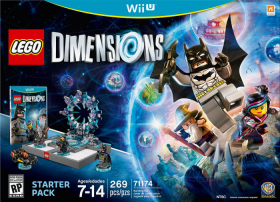