Do I still have your attention? Good, then I’ll continue...


The basic premise of the game is simple, the first three movies are played through but everything is made of LEGO. You get to play all the main characters (with a few bonus ones thrown in for fun) while trying to solve the puzzles and complete the game.

OK, so it’s not the most original idea in the world as LucasArts released the popular LEGO: Star Wars games back in 2005. But with the recent release of the 4th Indiana Jones film I guess they thought they could capitalize on the hype, but don’t be fooled into thinking this is a cheap quick knockoff game that was rushed for the opening. LucasArts and Traveller's Tales have taken what they learned from the previous LEGO games and improved it to make a fun, action packed game that makes it hard to put down. You start off just the same as the demo available, trying to get the golden idol and escape the giant boulder. But along the way you have to collect 10 treasure chests and a set amount of coins per level (to obtain “Ultimate Adventure”) and still come out with the prize. Like other games of this style only some areas are accessible to certain characters, Indiana has a whip and so can swing across cliffs where as Short Round can crawl into small areas (yes, you get to play that annoying kid. I spent a good 5 min just slapping him!)

The game is designed to make you revisit each level more than once, the first is to simply play through in story mode and the second is to collect all the prizes. Some are really hard to reach and others take a little bit of thinking, but it’s nothing beyond an average gamers capabilities. With this in mind the developers did sway from the path of the films a little bit, but only to make it a more challenging game for all. 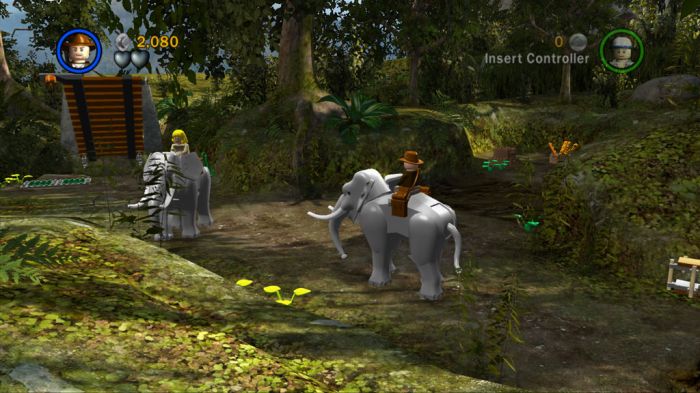 As you would expect with LucasArts, the graphics are nothing short of what is needed with a few trimmings. The scenery is authentic to the last detail, though not overly exaggerated and over the top. The interactive parts of the game however, are made up of authentic looking LEGO bricks so you know what to interact with. The character’s animation is funny and amusing, the video clips even reenact the sword swinging bad guy with Indiana shooting him at the end, but with this being LEGO, they guy simply falls to pieces.

For me the game play was smooth and with a steady growth of skill towards the end. And with the skill you achieve at the end, replaying the first levels to get all the hidden secrets becomes easy. The game has a steady pace with no time limits so you can take your time and explore around, however the AI of both your co-player and the enemy can get a tad annoying at times. I often found myself in a battle of 3-4 enemies with the co-player in front of me, thus having to beat them up just to beat the enemy up. Not the most sophisticated in the world but it does the job. 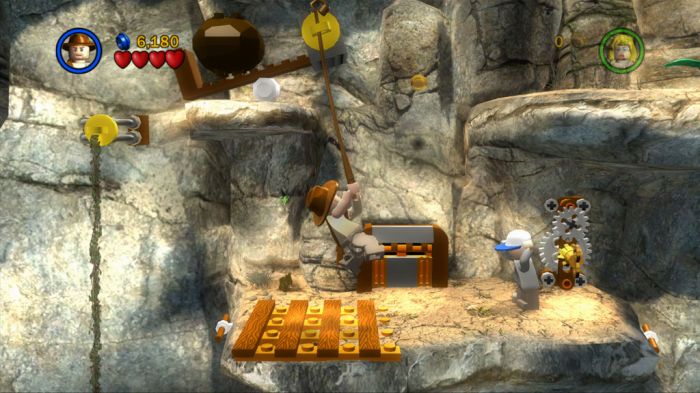 Another fun game for the PSP and if you’re a fan of the films or the LEGO franchise then you’ll like it even more. However there are a few bad points about the game I feel I need to mention. The video scenes between the levels are long and although informative they can not be interrupted, however when in the free play mode they are not present. The loading times are extremely long and I’m talking about a good couple of minutes plus in some places. Which for a PSP game is bad but well worth it when you start the level as there is hardly any load time between the different sections which makes up for it. Some scenes are annoying in that you can’t backtrack and try to find all the secrets and theirs no restarting the level as you have to go back to Barnett College and restart the entire level again, and wait another couple of minutes.

Additional good quirks of the game are amusing, like the fact that Indiana is afraid of snakes and so won’t be able to pass beyond a certain point where they are (Henry is also afraid of rats and Marion is afraid of spiders). The game as a whole is well rounded and I personally thoroughly enjoyed playing it, but once you complete all 100% there is no real need to continue and as such gets a medium replay-ability score.