LEGO Lord of the Rings: The Video Game Review

This game has Tom Bombadil in it. What more could you want? That game changing nugget of information aside, Traveller's Tales bring us LEGO Lord of the Rings. A fully voiced, free-roaming-ish take on the lives of those defending Middle Earth. With so many LEGO games based on big franchises, one has to wonder if there's enough ideas left to expand on the existing formula. Read on to find out if that's the case.

Taking place across all three of Peter Jackson's LotR movies, the game works much the same as other LEGO games that happen to tie-in to movie franchises - it first makes you play through a story based level, loosely following the original plot, then once done you can re-enter the level at will with all manner of unfitting characters, looking for secrets and those precious studs. Here, however, it's a little different. Instead of just going to levels inside a large hub, you are instead presented with Middle Earth in all it's (reduced) splendour. Once you have done the initial levels in Bag End, you are then tasked with heading to Bree to meet Gandalf. This doesn't mean a cut-scene where you arrive, then go to the next level, no. This means you get off your lazy backside and you damn well walk to Bree! While the scale is of course reduced massively, there's a huge immersion factor at work here, even in LEGO form, which is difficult to replicate. Thanks to having proper visualisations from the movies, you'll pass numerous familiar sites on your travels you can stop off and explore, which isn't possible without this pseudo free-roaming aspect. 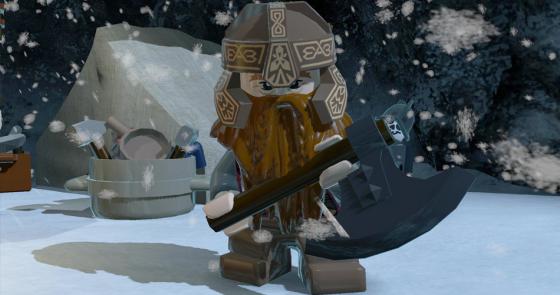 The game plays similar to all before it, with each character 'type' having a certain ability. For example, Gimli the dwarf can use his mighty axe to destroy already weakened ground to uncover secrets, while the peaceful Samwise can cook food and grow plants (which can then be destroyed revealing a once-hidden path. Breaking up the actual levels and the exploring is side-quests; such as forging an item. These require mythril blocks (which take the place of the series' traditional gold blocks) and a blueprint which can be found hidden around levels and in Middle-Earth itself. Rewards can vary, but if you find yourself with a red block, well that's always good as it'll make your life easier, with red blocks giving you access to stud multipliers and various cheats. The mythril bricks, however, can be used to create items in a forge.

The game looks the part, both in Jackson terms, and in LEGO terms, with background and foregrounds using realistic graphics, with the main bulk of the game being designed in breakable LEGO. The dual aesthetic works as well as ever, possibly more-so in this case with such a vast world. The game also utilises a split-screen approach at times, for example as the Hobbit's are trying to out-maneuver a Ring Wraith (which will be shown in the corner of your screen), you are controlling Gandalf in a battle against Saruman, with control shifting back and forth between both instances. 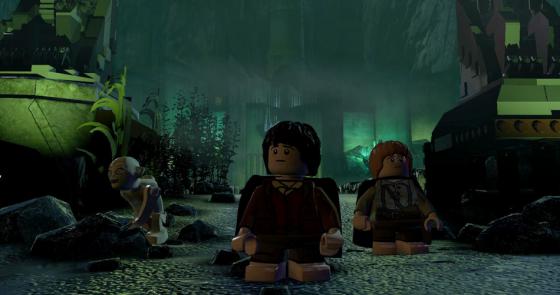 The sound is top-notch. With full voice-overs lifted from the movie, as well as the beautiful soundtracks which play in the background on your travels. The voiceovers work better than I initially expected, with the series' trademark humour not dampened, even in the more serious scenes, and it does lend a little more personality to your blocky friends than the usual grunts and giggles they have let out in the past. While I had concerns originally, the voices add to the game and I'm glad they were included.

As a fan of LEGO games, you'll want to get this, as a Lord of the Rings fan, you'll probably at the very least want to try this. It retains the simple but addictive gameplay the series is known for, and adds a free-roaming aspect to one of the most beloved fantasy worlds in memory. In my preview I criticised this, but once having access to the whole game, to all characters and abilities, as well as being able to go to more open areas than Helm's Deep really makes the game shine. Initial misgivings are gone, and in my infinite wisdom I spent over an hour exploring the Shire before I even thought about going to Bree. Let's just say if the fate of Middle Earth were in my hands, well, when the Wraiths came to the Shire to look for Frodo, they only would have had to look at the lunatic who was standing punching the vegetation, while Sam looked on, disappointed at my lack of progression. 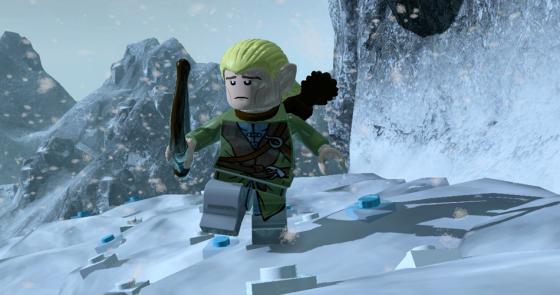 As you collect the studs, you can use these to purchase numerous new characters to play with in Free-Play mode. This allows you to take characters with special abilities, and find yet more hidden secrets, which yields yet more studs, which gives yet more chances to buy new characters which gives new options to replay levels. This is what the bulk of your time will be spent with after the story completion. Exploring the open world is more advisable with lots of characters unlocked, simple because if you come across a certain obstacle you otherwise couldn't pass with Frodo, for example, you're sorted.

While the game does have co-op options, I never had the chance to try it out. Single player works well enough in this case, anyway, and I experienced most of what this addictive little version of Middle Earth had to offer. If the idea of exploring the world and punching everything in hopes it yields studs even remotely appeals, LEGO LotR is right up your street. It's not quite the best entry in the series' history, but it's certainly up there, and any returning fans will surely be glad they spent their time on it.

This game also has Tom Bombadil in it. Priorities, folks. Priorities.

LEGO The Lord of the Rings (Reviewed on Xbox 360)

This game has Tom Bombadil in it. What more could you want?

LEGO Lord of the Rings: The Video Game Review

I was quite interested in this game, after your review I think I might have to get it purely for Tom Bombadil.

Tom Bombadil is in this game. Hey come derry do and all that. I love that weird bastard.

LEGO The Lord of the Rings