I know what you are thinking … “Oh no, not another Star Wars game!!”

Now hold your horses and give me a chance to explain …

Yes, this is yet another Star Wars game that’s based on the original trilogy films from George Lucas. But before you start flicking through the other reviews, give me 5 minutes and I’ll explain why this version is different from the rest.

Let me start by telling you the biggest fun factor of this game is the world that it’s set in, LEGO. It’s still the Star Wars universe, with Cloud City and Yoda to name but a few things, but everything you see and interact with is made up of the popular children’s toy, LEGO bricks!! You get to build items, destroy almost everything you can see, fly ships like the Millennium Falcon and all while rescuing the galaxy.

OK, so the plot didn’t take a lot of work to figure out but what the developers did to enhance the gaming is well worth spending hard earned cash to enjoy. Each character has a unique ability that is mostly drawn from the film, like R2D2 can open access doors and activate controls. But they added in extra quirks like Chewbacca actually ripping off the arms of a hand-to-hand opponent (with a quirky *pop* sound), and even Princess Leia walks with a strut and slaps characters rather than punching them (typical woman!). 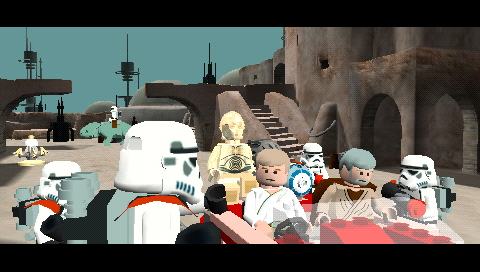 As I’ve already said the world can be built, moved, changed and ‘almost’ completely destroyed. However the parts you can change are sometimes not that clear and only certain characters can interact with items, like a red glowing item can only be moved by a Jedi (good or bad), while anything shiny and reflects a blaster shot can be blown up by a bounty hunters grenade.

Well it’s the same as the film, save the girl, save your friends and save the galaxy from the evil forces of the Sith. Each film is split up into 6 levels and each of those has 3 game modes for which they can be played in, ‘Story’, ‘Free Play’ and ‘Challenge’. Between these modes there are 5 goals to achieve, both the ‘Story’ and ‘Free mode’ have each a coin count to achieve what’s called “True Jedi”. Then there are the 10 mini-kits which can be collected in either ‘Story’ or ‘Free Mode’, the ever elusive “Red Brick” which gives you abilities (like x2 coin count) and finally the ‘Challenge’ mode which gives you a deadline of collecting a further 10 blue mini-kits within a certain time. 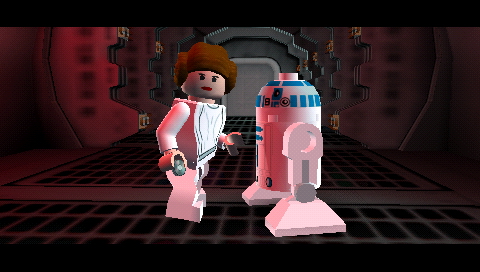 “So what does this all mean?”

Well, add to the fact that you have to play through the game once over to unlock each level, it means that the replay ability is high due to the number of items that can be collected. The game actually forces you to play each level at least 3 times. Then once all the levels are unlocked and have their 5 goals achieved, you get bonus levels to play like one of the level from the Prequel Trilogy, which are labeled as the “Darth Maul”, “Count Douku” and “Darth Vader” levels.

The game plays really smooth and even though this version is on the PSP there is plenty of extra content exclusive to this version, but steps have been taken to minimize lag with loading times. Mos Eisley Cantina is a ghost town, with only your character plus partner actually there. The same thought has gone into the entire game and steps have been taken all over to minimize the loading lag time, but it hasn’t diminished the game in any way.

In fact the game has received several awards including the IGN’s “Best PC Action Game of 2006” and 3 from the BAFTA Video Game Awards for “Best Children’s Game”, “Best Character (Han Solo)” and “Best Game”. This is no mean feat to do.

Most definitely so, even if your not a fan of the Star Wars universe you’ll laugh out loud on how quirky and playable this game is. A lot of work has gone into it to make it fun and exciting to play and it shows. The bonus about this is since it was released in 2006 it’s technically old and thus you can pick it up for pocket change.

This game might not be the most sophisticated one out on the market, or the most visual and audible one but the pros of the game definitely outweigh the cons. It’s fun, quirky and keeps you going back for more even if it’s to pull the arms off droids and storm troopers!!

This game captures the Star Wars universe and is fun and quirky to play, a must for any PSP owners.

I know what you are thinking … “Oh no, not another Star Wars game!!” Now hold your horses and give me a chance to explain …