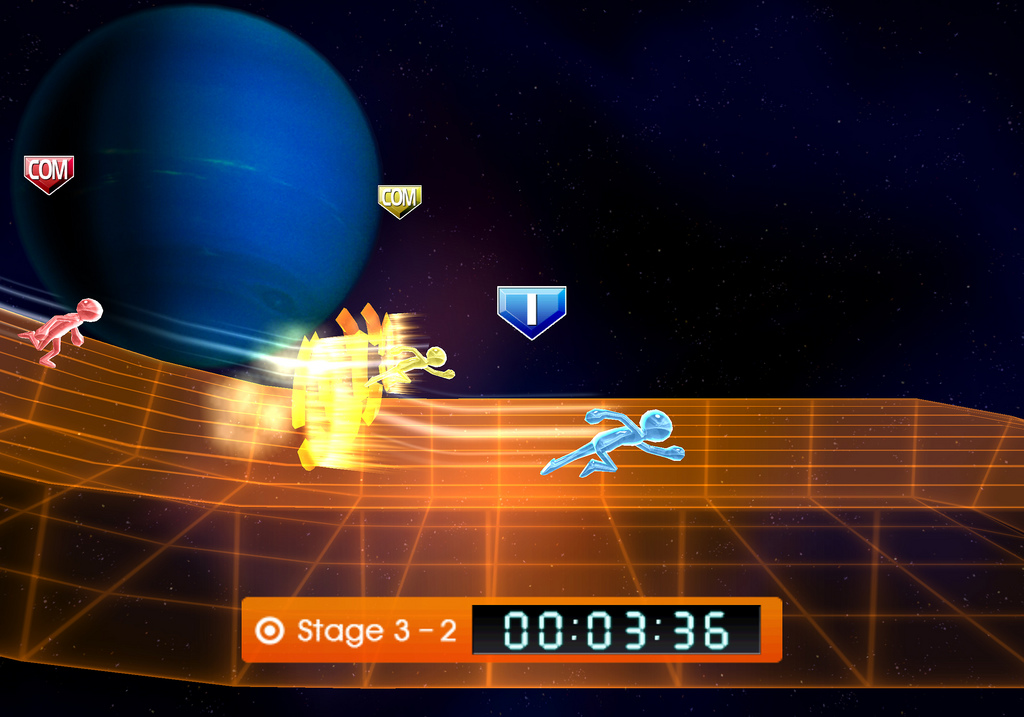 Let's Tap is one of the most interesting games I have ever had to review. It has a truly unique style of play and can be picked up by anyone of any age that wants to try something new. With the Wii being the console it appears exclusively on, you would think it had something to do with motion controls - wrong. Although the Wii remote is used, it's not even touched during play. Allow me to explain.

Upon loading the game, you are told to have a flat surface in front of you that can be moved, such as a tissue box. The idea is that you place the Wii remote faced down on this surface tap to control the actions on screen. After having your remote in place on your tissue box, hefty useless book or Tap box that comes with the special edition version, you are shown an interactive tutorial on how it all works. This game really shows off how sensitive the motion sensors are in the Wii remote as even the lightest taps are recognised. The menus are also navigated using taps , but are very frustrating at times when some of the taps aren't registered. If the tapping during the menus is what annoys you, it's possible to just navigate using the controller like normal. 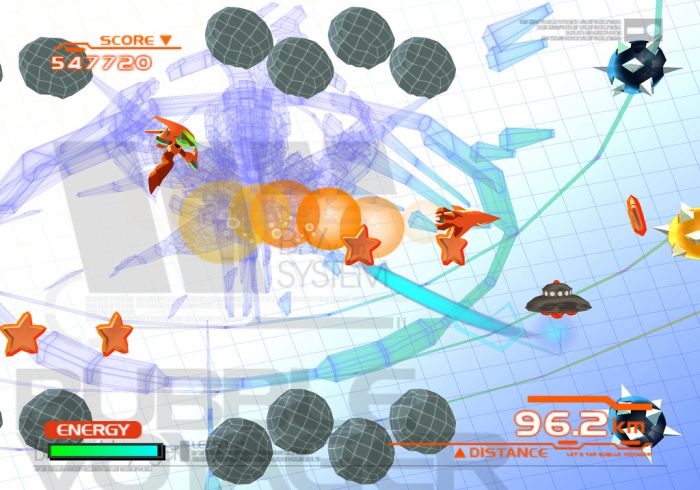 Following the tutorial, you are shown the games to choose from. As Let's Tap is a party game, you would assume it would have a good few game modes but five is all you can choose from. The game modes are: Tap Runner, Rhythm Tap, Silent Blocks, Bubble Voyager and Visualizer. Each game can be played with up to 4 players providing you have enough tapping surfaces, as using your limbs to rest on just doesn't cut it. Some modes are a lot more fun than others so to get you in the know, here's a little walkthrough of each mode.

Tap Runner is easily one of the best games to play. Each player controls a neon coloured running man with the goal of reaching the end first. You have to run, jump, pump and swing your way to the finish in the fastest possible time. Harder taps make your character jump and faster paced taps make your character sprint a bit faster. There are 20 different tracks to play which progress in difficulty and variety with the final 4 being ones that resemble track events such as the 100m.

There is always a massive amount of screaming and atmosphere when 2 or more people are neck and neck when closing down the line. The same can be said about the single player mode when playing against CPU opponents. If you don't get the tapping pressures right, you will be jumping all over the place, so some practice is required to nail each track perfectly. 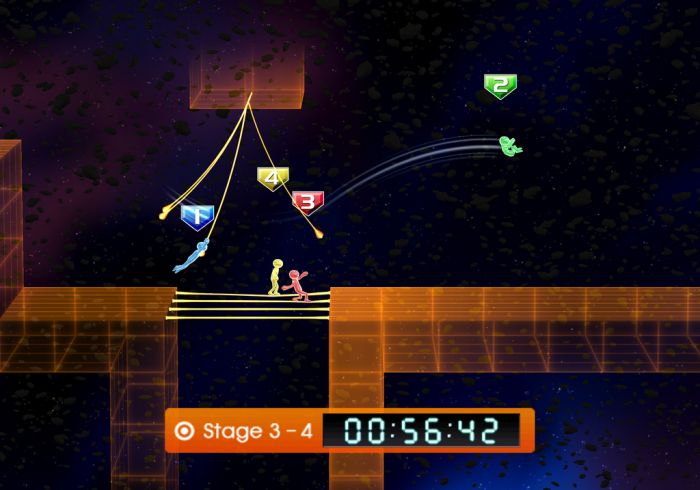 Rhythm Tap is another fantastic game that graces Let's Tap!. Like the name suggests, it's a Rhythm game. In this game you tap your hands to the beat of some tracks in the game, some you may know of already as they are fairly popular, and some have been created specifically for the game. No matter which one you play, you will enjoy them. The soundtrack for this game - just like in every Sega game - is superb. The main menu title music itself is ridiculously catchy and even more so when you play it in this game mode.

The notes consist of light taps, medium taps and hard taps. Unlike all the other rhythm games, you can interpret the music the way you want to. For example, in Guitar Hero if you over-strum or hit more notes than you should, you are penalised with a combo break. This is not the case in Rhythm Tap. When the music is being played, you can tap to how you want to without being penalised. I love this idea as you can tap away to the beat of the music without having the thought of thinking you are doing something wrong.

Silent Blocks is one of the lesser good games. Well, if you like puzzle games then you may enjoy it, but I personally didn't. The game focuses around removing blocks from a tower to match up 3 or more in a row. Once this is achieved the blocks change colour. Once a certain block colour is obtained, the game is over. 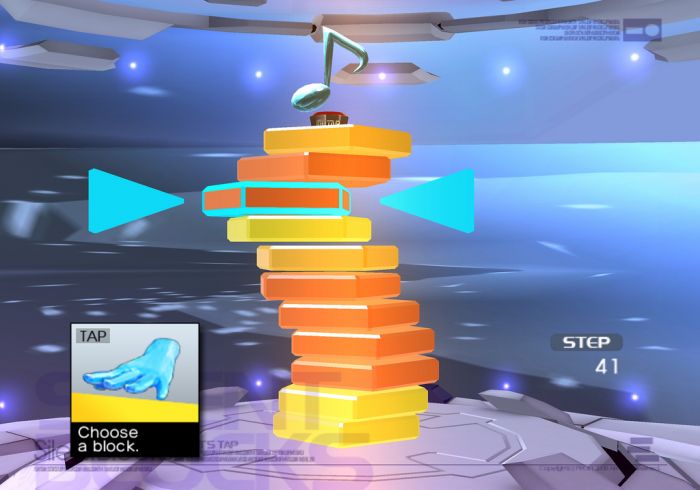 Bubble voyager is a sort of side scrolling game, of which in single player you fly around shooting things, collecting items etc. and in multiplayer it's a dogfight with everyone against one another. The controls are hard to grasp at first but once you get used to them, they work fine. Double taps make you fire and slow repetitive taps make you accelerate. To control the direction of which you are going, your character is constantly spinning on circles until you decide to either shoot or move forward which like I say takes some time to get used to.

It's not really the mini-game that should be associated with this style of play and doesn't really work, but if you are fond in trying out new things then don't give it a miss as you may enjoy it.

The final game isn't really a game. ‘Visualizer' is quite literally a visualiser that you would find on Media Player or iTunes but with an interactive touch. You can tap in different combinations to make each visualiser do something different, but to call it a game is probably too big a compliment. It's very gimmicky and will give you enjoyment for about 5 minutes. Then on after, you will never use it again 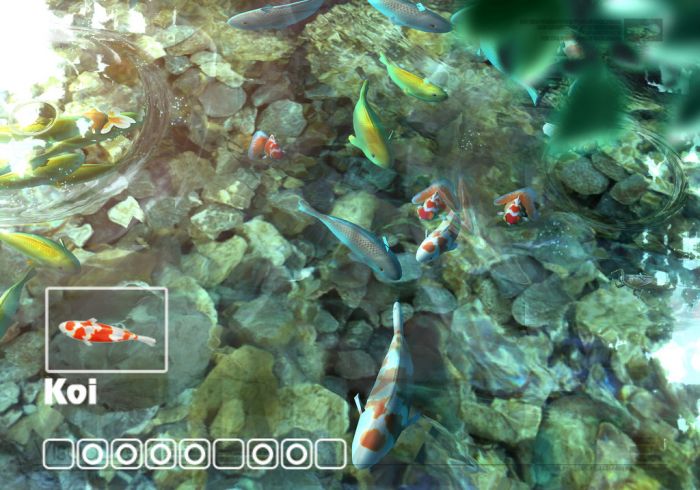 The graphics used throughout each game vary from cell shaded to plain 2D environments, but each game suits its look. There are never any framerate issues so crisp play is ensured but then again it's not too much of a graphically enhanced game. I personally prefer games that suit what they look like and those that don't overdo it. Therefore, Let's Tap does this very well indeed.

Although the game has multiplayer and single player versions, it shines most supreme in multiplayer with your friends. After all, it is a party style game. One thing it does lack is online play. If like myself you can't have many people round your house all the time, you would like to play with some actual people, not just yourself - no pun intended. The non-existent online multiplayer mode means that the longevity is reduced as well as the desire to play the game. You could have a time trial leaderboard or a straight live online multiplayer to enhance the experience, but this is not so. 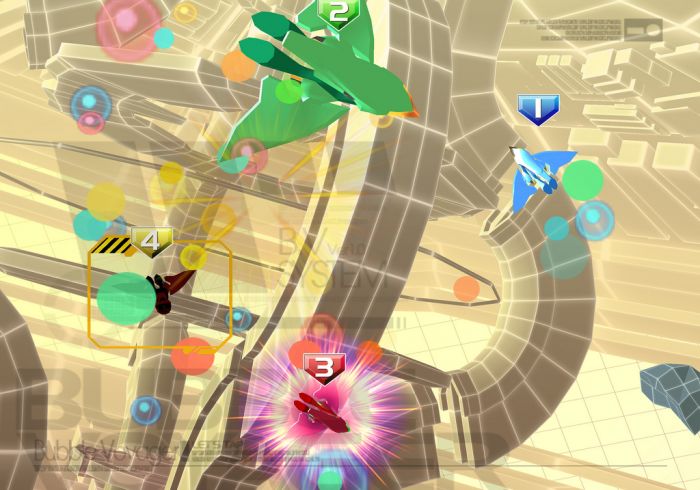 Let's Tap is no doubt an exciting and original game, but should you get it? If your house is usually crammed full of people anxious to play your latest and greatest purchases, then buy away. If you however spend most of your home time alone sitting in your room playing hardcore games like No More Heroes on your Wii, I would suggest you steer clear. Overall, Let's Tap serves it's purpose in being an innovative game, but lacks in what could have been a potentially outstanding title.

Could someone edit this, I don't have access. In con's - 'tedious' is spelt wrong as is 'visualiser'. I will have a read through the article now just to try and spot any others that may be lurking.