Little Nightmares is the latest entry in the burgeoning genre of “cute-looking-but-actually-terrifying indie-horror-games”, and feels like what would happen if Little Big Planet, Limbo and Inside took a bad acid trip on Halloween. And while comparing the game with the excellent Limbo and Inside is paying it a huge compliment, it’s also doing it a great disservice as it has its own unique charm and actually improves on its obvious inspirations in a number of ways. Unfortunately, it also fails to reach the heights of the aforementioned games in others.

One of Little Nightmares’ biggest strengths is its presentation. It bucks the current visual trend among indie horror titles of grey scale colour palettes, cartoonish character models and two dimensional planes. And although it is at its heart a sideways scrolling puzzle platformer, Little Nightmares is fully 3D. This not only allows for more interesting movement and gameplay options, it also brings its unique environments and character designs to life.

The cute Claymation-influenced visual style and colourful protagonist contrast beautifully against the freaky, nightmarish imagery and washed-out locations that are prevalent throughout the game. The highly-detailed character models and environments, and the excellent use of light and shadow augment the twisted, uneasy atmosphere created by the juxtaposition of adorable with terrifying. It also runs like a dream on all platforms, rarely dropping below 60 FPS on a mid-range PC and PS4 Pro, and staying locked at 30 FPS on PS4 and Xbox One. 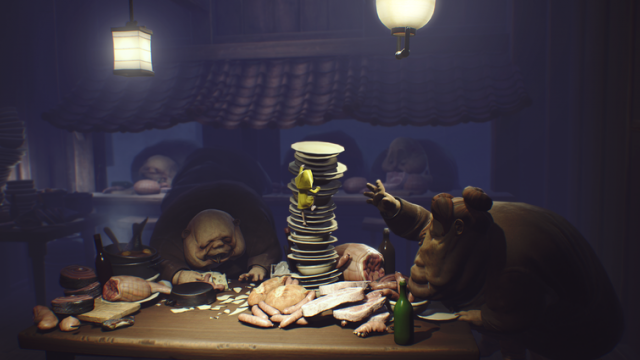 The sound design is some of the best I’ve heard in a horror game. The soundtrack consists of warped interpretations of childlike nursery rhymes, ominous drones, and occasionally even total silence. This can’t be stressed enough: the tension created as a result of Tobias Lilja’s tastefully understated score is truly palpable. When you’re exploring a nightmarish environment and an unnerving, mechanical drone slowly starts to rise, joined by dissonant chimes and unsettling vocal chants, it’s absolutely chilling to the bone. The Maw – the game’s antagonists – also sound suitably twisted, powerful, and (physically and morally) disgusting. The first time you hear one’s vile, guttural cries it’s truly a pants-messing moment.

The effort put into the presentation only serves to bolster the impact of the story. Much like other indie horror titles, Little Nightmares is about showing rather than telling, and every last metaphor in the narrative can be picked apart if you take the time the analyse its symbolism. If you just want an effectively creepy horror story that plays on the irrational fears many people will have had during childhood, the game delivers on that level too. Themes like innocence, oppression, and abuse of power are sometimes too forcefully shoved in your face, but for the most part the narrative unfolds as subtly and tastefully as the atmosphere.

As immersive, unique and well-crafted as the atmosphere and story are, when it comes to gameplay Little Nightmares is at its best an okay platformer. This is definitely no Inside or Limbo when it comes to tight, engaging gameplay. The gameplay loop is simple: you spend your time avoiding The Maw by sticking to the shadows or hiding behind/under/in objects, solving environmental puzzles and platforming. There is very little challenge throughout the game’s (short) length, be it in the form of puzzles or the rudimentary stealth system. Puzzles typically require less than a minute to solve, and save for unintended mistakes or careless abandon you will rarely find yourself being spotted by The Maw. 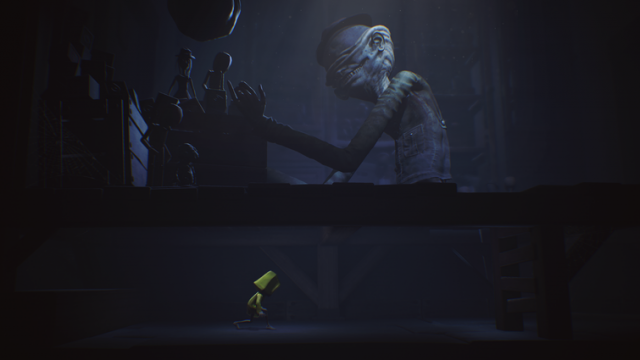 A couple of heart-pounding chase sequences which require cat-like reflexes are welcome additions in terms of pacing, but the controls are too clunky for the kind of split-second precision that is needed to succeed in them. Ultimately all that happens is you’re forced to replay these sections over and over, with them becoming more tedious than terrifying. Similarly, even in the game’s slower moments the controls frequently make navigating the environment unnecessarily awkward. Basically, you’re going to find it hard to want to keep playing unless you’re truly immersed in the narrative and game world.

Little Nightmares is unique and engaging, there is no doubt about it. It stays with you long after you switch it off. It’s definitely an effective horror experience, but it’s an undercooked horror game. If atmosphere and story are enough to keep you pushing through lacklustre gameplay, this is a must-have. If you’re a veteran of the puzzle platformer and purely after a satisfying gameplay experience, best to steer clear.

An extremely effective horror experience, but an undercooked horror game.