One complaint that’s consistently levelled against the big game publishers is that they lack creativity. Companies like Ubisoft, EA and Activision are often criticised for failing to innovate, instead churning out sequel after sequel of their most popular franchises. However, one series that’s always valued creativity and innovation above all is Little Big Planet. While the fact that this is the first numbered sequel not to be developed by Media Molecule didn't inspire much confidence, LBP3 is another strong entry that adds plenty of new toys and tools for players and creators alike.

In a series tradition, the game opens with a live-action video accompanied by some excruciatingly quaint narration from Stephen Fry. Mentions of "imagispheres" and "cerebrum-bilical cords" are particularly cringe-inducing. Ignoring the occasional questionable portmanteau though, Little Big Planet’s patchwork universe continues to be a charming and eye-catching one. Its good looks come more from design than any technical feat, though; the PS4 version runs at a higher resolution and frame rate, and probably includes a texture upgrade too, but there's not much to discern this entry from previous ones - at least visually.

Thankfully, the opposite is true of the gameplay. While it would’ve been easy for Sumo Digital to churn out what would effectively be a content pack for LBP2, it’s clear that the studio has made a real effort to expand upon the series. The main addition is that of three new playable characters - Oddsock, a dog-like creature who can run and jump on walls; Toggle, who gets his name from being able to toggle between the strong and heavy Big Toggle, and the small but fast Small Toggle; and Swoop, a sack-bird that can fly, glide and carry objects with its talons. 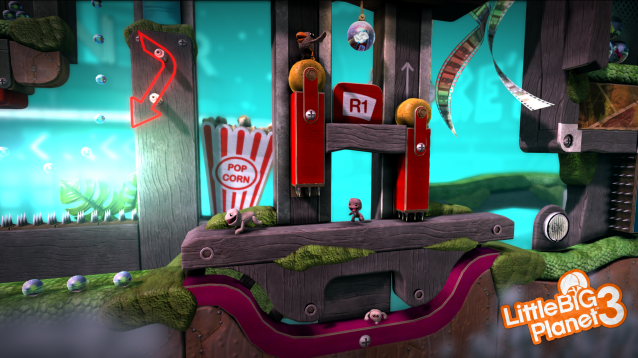 In addition to the heroes, there are six new gadgets that can be wielded by Sackboy, including a gun that can shoot or suck air, boots that give you the ability to double jump, a hat that allows you to ride on rails and a gun that can be used to teleport around levels. Creators can even make their own gadgets, opening up the realms of possibility even further.

Another big improvement has been made in the game’s layer system. Whereas previous entries had levels confined to three playable layers, LBP3 allows creators to use a whopping 16 layers of depth. This addition is put to particularly good use in a top-down platforming level that had the character bouncing up towards the screen - something which wouldn’t have been possible in previous games. The single-player is littered with interesting levels and sections like this, and I can only imagine the novel creations that will come in the next few months.

Like many players, I’ve always guiltily enjoyed playing the LBP community’s levels, without ever putting the time in to create one myself. Thankfully, level creation has been made more accessible than ever - Sumo Digital have included a huge number of tutorials to help players, and they've been 'gamified' with objectives for the player to complete using their new creative knowledge. Unlike most tutorials, these ones are actually fun and are likely to inspire a whole host of players to get creating - myself included.

There appears to be more effort made in the storytelling department, too. For the first time, every non-playable character is fully voiced, and the cast - which includes Hugh Laurie, Nolan North and Peter Serafinowicz, as well as the aforementioned Stephen Fry - is fairly impressive. The story itself is pretty ho-hum, but the eccentric cast of characters and varied environments keep things interesting.

The campaign is improved further by its non-linear structure. Instead of having the player do all the levels in a set order, LBP3’s single-player adventure consists of four worlds, each containing a main hub. In these stages, you’re free to explore and take on any level you encounter. Naturally, some areas only become available once you’ve unlocked a particular gadget or hero, but this added complexity really contributed to my enjoyment of the campaign.

Overall, Little Big Planet 3 is a resounding success. Sumo Digital had the unenviable task of taking on one of Sony’s franchises, and pulled it off with gusto. A more technical advancement to go with the new hardware would’ve been nice, but the new additions are numerous and significant enough to ensure plenty of ambitious and exciting content from the Little Big Planet community.

Sumo Digital had the unenviable task of taking on one of Sony’s franchises, and pulled it off with gusto. A more technical advancement to go with the new hardware would’ve been nice, but the new additions are numerous and significant enough to ensure plenty of ambitious and exciting content from the Little Big Planet community. 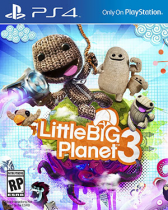