Lost Planet 3 is almost the direct opposite of what came before it. Unlike the first two games in the ice-cold series, the third in the trilogy is the first to be developed externally (that is, not by Capcom), and boy does it show. It's ironic really, that all the features that made the first two games great (first-class boss battles, mech combat and eye-wateringly beautiful explosions) are now absent from Spark Unlimited's take on the franchise.

At the same time, features sorely lacking from the original two (a decent narrative and a protagonist with more personality than a fish) are the largest saving grace for Spark's first major venture into the industry. That may be slightly unfair on the developer, but in the broadest terms possible, it's largely true.

Set before its two predecessors, you're placed in the boots of one Jim Peyton; a family man and miner who has been given an offer he can't refuse. With the promise of untold wealth and the potential to save mankind from its energy crisis, Peyton is shipped off by the NEVEC corporation to the frozen planet that is E.D.N III (pronounced Eden). Unlike David Attenborough's documentary series though, the wildlife on Peyton's new home isn't exactly camera friendly.

You see, E.D.N III already belongs to a certain native species - The Akrid. These highly aggressive extraterrestrials would like nothing more than to eat your face, and it's your job to protect the rest of your team whilst harvesting the all important resource that will save mankind - T-Energy. Equipped with a giant, lumbering mech (we'll get to that massive disappointment later) and a bunch of new friends who make their home in a Hoth inspired command post, you're sent on your merry way into the bitter cold to work. 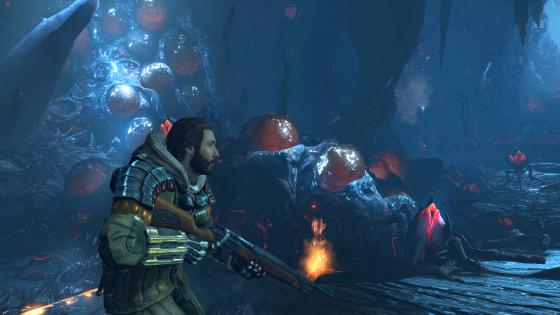 Sadly, that is exactly what LP3 can feel like as soon as you step outside the gate, and whilst there's nothing inherently bad about the prequel, there's also nothing to ever really elevate it past medicore. The prime example is the third-person combat. For the majority of your time with the seven hour campaign, you'll be blasting your way through waves of human sized Akrid whilst repairing dilapidated outposts and discovering the secrets that E.D.N III has to offer. All the standard weaponry is available, and your arsenal can be improved for a T-Energy fee back at base. The glowing substance itself is largely gathered from fallen enemies and completing objectives but most of these upgrades are superfluous additions that add little depth to gameplay.

Spark Unlimited have decided to implement depth in a different, more annoying way with the Rig. This hulking monstrosity is what you'll be spending most of your time in and that's not good news, because the building-sized mech is simply just not fun to use. Instead of following in Capcom's footsteps with linear levels and an arcade style to proceedings, Spark has decided to take a different route by offering the player a semi-open world to explore.

Unfortunately, with the exception of some pretty vistas to gawk at, there's really nothing worth exploring for. Even if you do decide you want to uncover every nook and cranny there is to find, chances are you'll think twice when you discover the snails-pace at which your Rig travels. It's for this reason that the majority of your game time will be taken up just travelling from one location to the next leaving you to wonder why these colonists have never thought of installing some damn wheels on the feet. 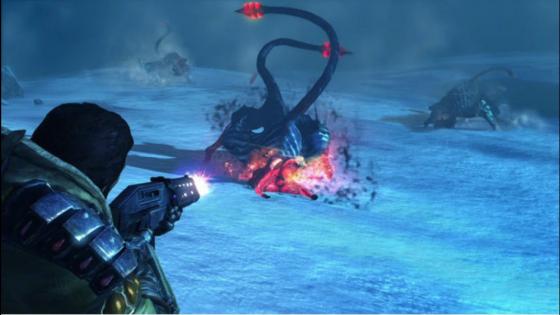 We have to admit, the transition between third-person combat and first-person Rig controls is a nice pace changer, but outside of boss battles where you are forced to partake in combat with metal fists, the Rig is nothing more than a glorified HUD, and even that benefit is only provided when the you are within spitting distance of it. Combine that with the just plain dull and frustrating boss battles that force you to use the Rig and you end up with a potentially excellent idea muddied by poor execution.

Fortunately, Peyton is a very likeable character, and his down to earth story really does help to make you look past the flaws in gameplay. Once the credits roll though, there isn't much left over for you to get excited about. You can go back to just before the hour long finale to complete any side missions you may have missed, but these consist of repetitive tasks like defending your Rig whilst it mines for energy or slaughtering certain species of Akrid.

All that's left is the multiplayer, and it's much the same story as the single player. The standard deathmatch and objective game types are available, but the lag and choppy framerate sullied any chance at getting to grips with it properly. If you simply can't get enough though, there's an obligatory Horde mode that pits two teams of three against each other and swarms of Akrid. 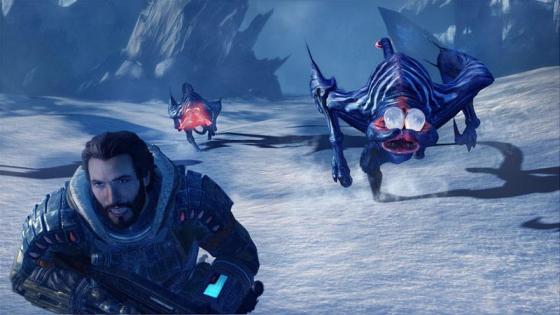 It's unsurprising how Lost Planet 3 has turned out. Capcom's whoring out of its intellectual property certainly isn't new, and whilst there have been success stories in the past, this is one that should have probably stayed with the Japanese giant. We wouldn't suggest you avoid Lost Planet 3 at all (it has it's merits), but there are certainly games out there more deserving of your money. If it's the icy temperature you're after, then we recommend you pick up the first two in the series instead for a fraction of the price.

It's unsurprising how Lost Planet 3 has turned out. Capcom's whoring out of its intellectual property certainly isn't new, and whilst there have been success stories in the past, this is one that should have probably stayed with the Japanese giant. We wouldn't suggest you avoid Lost Planet 3 at all (it has it's merits), but there are certainly games out there more deserving of your money. If it's the icy temperature you're after, then we recommend you pick up the first two in the series instead for a fraction of the price.