Magic 2014 - Duels of the Planeswalkers Review

Duels of the Planeswalkers is now in its fourth iteration in the form of Magic 2014 and this time, it's better than ever. There's been a few additions to the game that fans have wanted since the birth of the franchise but have only just made it in. Either way, sit back, get your cards out and read our review of Magic 2014 - Duels of the Planeswalkers. 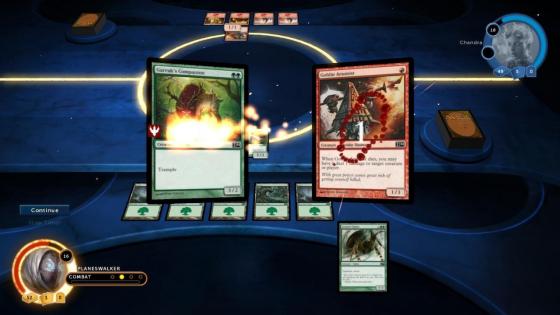 It's probably good that we fill you in on the basics of Magic: The Gathering first. A very broad overview of the game is that you have two or more players who have a deck of 60 cards (max). They each have 20 life points and the aim of the game is, using the cards, to reduce your opponent's life points to zero. There's a lot more to it than this but this will give you the general idea of the game.

Returning from the previous titles are the single-player campaign in which you are pitted against 25 AI opponents, puzzle challenges and online multiplayer with up to four players. We would however, prefer to focus on what's new to the series.

First up is the highly anticipated "sealed play". In this mode, you are given a number of booster packs (such as you would buy from a physical shop), each containing 15 cards. You then combine these cards to create your deck. Luckily, it's fairly user friendly and displays how strong the game thinks your deck is in the form of stars. More stars equals a better deck. You can then take this deck and fight through the sealed play campaign which consists of six AI opponents. After this you can take the challenge online and face other sealed play human opponents. 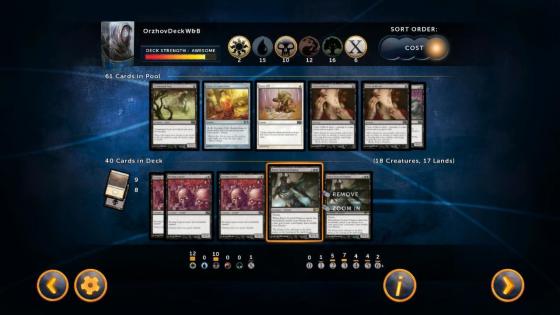 Next is a detailed statistics page for your 'magician'. This shows everything from what your favorite mana colour to how many battles you have won and lost. It's a fantastic addition for those more serious players but also quite a nice quirk for those interested in how they've been doing.

Onto the cards themselves and there's been a few tweaks here too. A new type of cards, the 'Silver' creatures, has been added into the fray in Magic 2014. These creatures range across a variable of manas. Each silver creature has its own ability, much like other cards. However, the silver creature can grant its ability to every other silver creature on the battlefield. For instance, if your ability was that your card didn't tap after it attacks, all your silver creatures will not tap after attacks. This should certainly mix things up on the ever changing battlefield.

A small, but by no means unwanted, addition is that some rare or powerful cards now have minor animations in their images. We were quite surprised to see this the first few times and it was definitely a nice change. 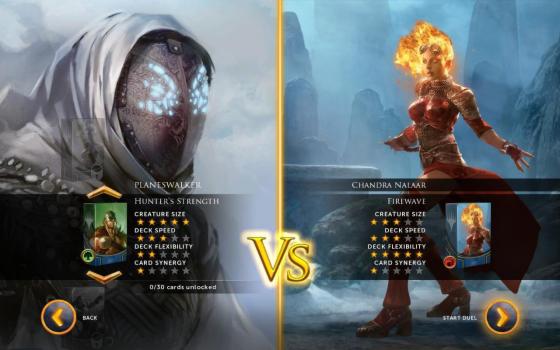 The largest barrier that most gamers will face when moving into the world of Magic: The Gathering is the somewhat steep learning curve associated with the game. Magic 2014 really helps smooth this curve down with a fantastic voiced tutorial at the beginning of the game. Whilst previous editions have had tutorials, they've never been quite as well explained as this one and quite as interactive. Hopefully, this tutorial will help create a few masters fairly soon.

Whilst Magic 2014 - Duels of the Planeswalkers will never be a replacement for the physical card game, it is definitely a step in the right direction towards a more immersive and genuine experience. It compliments the card game fantastically and allows for players to get on with the game with less faffing around or, if you are so inclined, you can faff around as much as you'd like with the addition of the deck builder. If you're a lasting fan of the series or just discovering this franchise, Magic 2014 is a perfect place to start your journey.

Magic 2014 - Duels of the Planeswalkers (Reviewed on Windows)

Duels of the Planeswalkers is now in its fourth iteration in the form of Magic 2014 and this time, it's better than ever. There's been a few additions to the game that fans have wanted since the birth of the franchise but have only just made it in. Either way, sit back, get your cards out and read our review of Magic 2014 - Duels of the Planeswalkers.

Magic 2014 - Duels of the Planeswalkers Review

Wizards of the Coast Interview

Good to see they've finally added a deck builder, for that alone I'll have to get this at some point.

The full pack always come down. Wait until Winter and then you can get all the DLC. 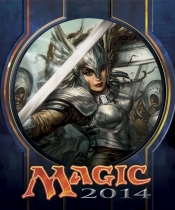 Magic 2014 - Duels of the Planeswalkers