Having reviewed Mantis Burn Racing when it first launched on the Xbox back in November last year, I was unashamedly overjoyed by the modern top-down racer’s plucky ability to hold its own in a genre that’s not had a great deal of love recently. Whilst we’ve seen some other names rekindle their passion in this area recently, VooFoo Studios have continued to develop their title, having added new hover-car types in the Elite Class DLC previously. This time, they're back - and they've brought weapons. Continuing from the solid base game that they've already created, the addition of weapons to Mantis Burn Racing seems like a great fit. There's a new career league to work your way through, battling the AI at more difficult odds. Car selection becomes ever more the key with this league. Do you take the car with more speed and handling in the hopes that you avoid all of the blood shed, or do you clad yourself in as much armour as possible, ready to take the battering to come out victorious? 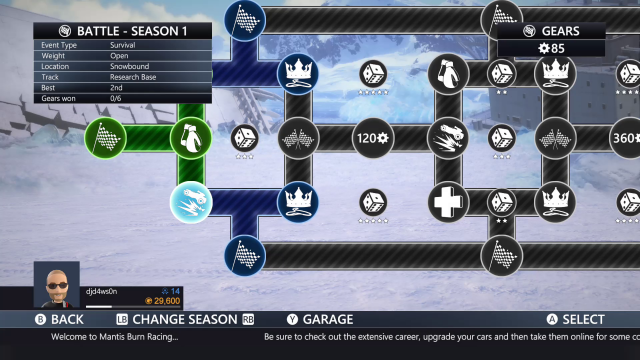 The three new modes added in for the Battle Cars DLC has you thinking of tactics to win that don’t just amount to being the first across the line. Instead, you’re playing to work out whether holding back is the better option and neutering your opponent's car with your guns, versus trying to get ahead and place some crafty mines to make sure that your enemies can’t get close enough to destroy you with their own brand of lead based destruction. 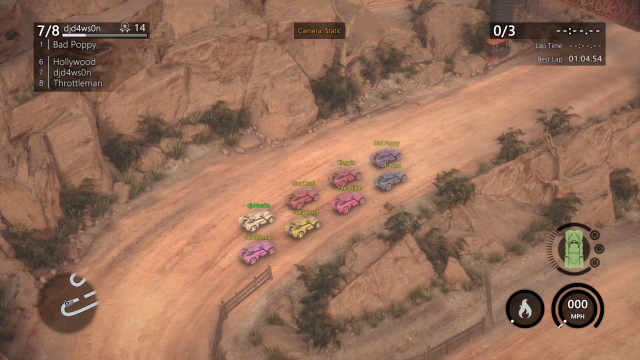 Overall, this is the addition to the game that has silently been missing from Mantis Burn Racing. I'd never expected to see guns and mines added to the game, but the subtle twist that they add to gameplay and the tactics you find yourself employing to win are a longevity nod in the game's direction. This update takes it from a competent top down racer, to a competent top down racer that will have you losing your wheels quick, and your friends even quicker.

This is the DLC for Mantis Burn that's nobody knew they needed. Now it's a staple mainstay for the game and shouldn't be played without.