Max: The Curse of Brotherhood Review

When young Max comes home and finds himself at the end of his tether as his little brother, Felix, annoys him, a quick online search grants him a way to be rid of his brother. A speedy, accidental incantation later and a portal from another land, conveniently called Anotherland, opens, and his brother is plucked from our world by a giant, monstrous hand. In the quickest turnaround of emotions, Max instantly regrets wishing his brother away and leaps into the portal before it closes and thus sets up the game's premise: get your brother back!

And so the game begins, and you're thrust into a very pretty looking 2.5D platformer, that is instantly not as fun as it looks. Beneath the nice, comic book visuals, and pursuing the monster carrying your brother in the background, the jumping from ledge to ledge feels imprecise and laboured. Max doesn't always jump just as you press the button, and as he tends to float like he's on the moon, controls feel pretty unresponsive.

They're pretty unforgiving, too, as at many points you'll find yourself screaming at the television when you feel you really should have made that jump and not plummeted into the abyss below. This isn't always the case, but either poor level design or poor game physics allows a potentially enjoyable and pretty game to turn ugly. 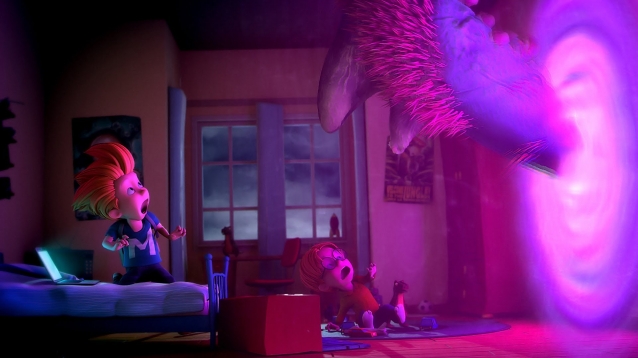 I should reiterate that this isn't always the case. There are many points during Max: The Curse of Brotherhood which are inventive, unique and really quite enjoyable, but the pacing feels pretty disjointed at times, moving from laid-back grey matter-using puzzle solving to relentless split-second 'endless runner' style chases. While these moments are quite enjoyable, you're thrust from taking your time and restarting at checkpoints where necessary, to legging it from a huge destructive monster across a rather difficult landscape. A landscape where it isn't always clear what to do to get from point A to point B on the first go, which would be forgivable if it didn't hurl you back to a distant checkpoint each time.

Max: The Curse of Brotherhood is like any other platformer, in which it has a unique property, a hook, a mechanism that differentiates it from its rivals. The hook here is in Max's, quite literal, magic marker. A guiding spirit aids Max along his way throughout the campaign, and her first job is to arm Max with magic. As the only item in Max's inventory is his pen, she imbues said pen with magic properties, giving Max the ability to draw into existence a number of things to help him along the way.

To begin with, it's fairly simple fare, using the pen to draw, or rather drag, mounds of earth into full platforms, allowing Max to complete levels or find hidden areas. Along the way, there are a few collectibles to find which can add an hour or two to the game, namely eyes and item fragments. The eyes act as a spyglass into our world, which Max can collect and lessen the prying power of the world's monster, and the fragments make up an artefact once all pieces are collected. Neither really adds anything to the story, or even the game, and feel really rather redundant. Max's powers increase in ability and scope during the few levels, and by the game's conclusion he can magic into life vines and branches from trees, allowing him to climb to out-of-reach places, guide running water on which he can hitch rides quickly and efficiently, and shoot off fireballs to dispatch enemies. There is an amount of enjoyment to be gleaned from these abilities, but they don't really give the player the sense of creativity and magic as would first appear.

Most of the pen's abilities allow you to create platforms and pathways which could easily just be there anyway, and while the pen allows the player more interactivity with the game, its control system is ghastly at times. Squeezing the right trigger brings it on screen, and using the analogue stick you guide it to where you need it to be, press the corresponding button and drag in a particular direction. Simple on paper but clumsy in practice. Moments which require fast usage of multiple aspects of the pen's abilities invariably end in frustrating death sequences time and time again, and only the most dexterous of players can hope of passing some levels in only one or two attempts.

The final act is the most enjoyable, as Max escapes with his brother in tow, and provides the whole ordeal with some sweet moments, but ultimately doesn't feel worth the tedious trek through this admittedly beautiful two-and-a-half dimensional universe. With the lack of Xbox One games on the online marketplace, bar the ones you can physically buy in shops for cheaper prices, Max: The Curse of Brotherhood can't help but stand out. Quite who this game is aimed at, though, is a mystery, as the childish story (or lack of) is charming but basic, and mixed with the lovely but cartoony graphics and animations give the whole package a younger flavour. The peril you find Max and his brother in are quite unsettling at times, and the abundance of times you find Max falling to his death gives it a more adult vibe. Neither trumps the other, and feels imbalanced and disjointed, rather like the game's controls.

Max: The Curse of Brotherhood is average at best, and despite some decent moments and inventive gameplay, nothing really stands out as being that enjoyable. A better control system and more creativity concerning Max's magical pen would have served this effort wonders. What is left is a short, frustrating game that is sweet and has its moments, but is ultimately unenjoyable.

Max: The Curse of Brotherhood (Reviewed on Xbox One)

Good-looking with a nice idea at the forefront, Max: The Curse of Brotherhood's execution leaves a lot to be desired. Clumsy controls, questionable physics and collision detection all ruin an otherwise decent effort.

Max: The Curse of Brotherhood Coming To PS4

Max: The Curse of Brotherhood Review

Max: The Curse of Brotherhood