There are some folks who long for the days of arcade gaming. A few titles here and there have tried to ignite that flame for vintage “beat-em-up” style games. It would seem that developer Hero Concept has its sights on bringing the genre back to the frontlines with Mayhem Brawler.

Firstly, I didn’t have much experience with this sort of gaming, so it was interesting trying it out and attempting to get my feet on solid ground while playing. The art style is also something that struck me when I first started playing. It was definitely detailed and quite animated. Everything felt hand-drawn which impressed me and made me appreciate the dedication that was put into making it.

If you are a fan of those “beat-em-up” style games like Streets of Rage, this game is right up your alley. Mayhem Brawler plays smoothly and is easy to pick up right away. For most of the game, you’re spending your time beating up no good mobs, with some of them displaying different kinds of magic powers. You are given the option of playing with three main characters, Dolphin, Star, and Trouble. They show a distinct fighting style with Trouble being your speed, Dolphin is your hulking brute type, and Star is your long-range character. 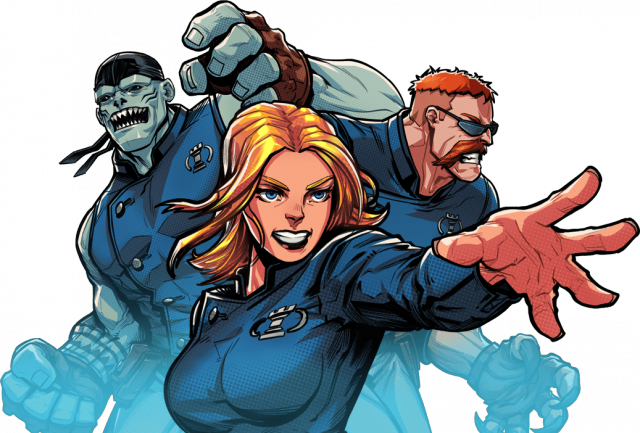 Each character is enjoyable in their own right, and the game tries to make you play with all of them by giving you the option to switch characters. They also do this by seemingly making some levels a little harder to complete with a particular character (at least, this was my experience). I don’t doubt that you can beat the seven-level game with just one of them, but I found it better to switch now and again (especially when I found myself dying over a hundred times).

But don’t worry if you’re afraid you’ll get bored quickly. While after some time, the game does get repetitive, there is the option of changing your difficulty to give yourself a challenge. So, if you are familiar with these types of games or your first time experiencing a “beat-em-up,” then there’s a difficulty for you.

One of the most impressive aspects of Mayhem Brawler was the story, and while I admit it was sometimes hard to follow, I won’t deny the time put into building this urban fantasy. The game begins with narration from Star, a telekinetic metahuman who is part of this squad of crime-fighting police. The story is told through a comic-book styled panel with additional modern inclusion of social media type scrolling sidebar. Star, seemingly the trio’s face, has a heavy presence on the internet and documents their crime-fighting through social media. It’s an exciting and sometimes second-hand embarrassing way to tell a story, but it still fits Star’s personality.

There are 12 stages, and you will play seven of them in a single playthrough. Our officers will then be taken through three different endings, which certainly increases the game’s replayability. The story’s mysteries and the established world indeed leave room for lore research into the world Hero Concept has built. While playing and meeting all of the villains and playing as each hero, my interest in more background was piqued, but the game does well without telling too much. Unlike some games that want to get right into the nit-and-grit of their plot without any building, that method works for Mayhem Brawler. It seems to work because much of the game’s plot is something you’ve either seen or played before, making it easier for you to fill in the gaps on the different characters. I wouldn’t consider familiarity a bad thing, especially since there is still originality to be offered.

Some of the most striking aspects of this game were the visuals and voice acting. There isn’t too much to say about either one; Hero Concept nailed it! The voice acting in the game is lively and exciting. The voice actors knew precisely what was needed for this game and delivered in a way that matched the chaotic and fantastical environment of Mayhem City. The developer was also creative with the visuals in the game, and they are an exquisite touch to the game’s theme. Each level has meticulous attention to detail that is to be expected. The background of each level, the power-ups, and weapons have their own designs and don’t look lazily thrown in. 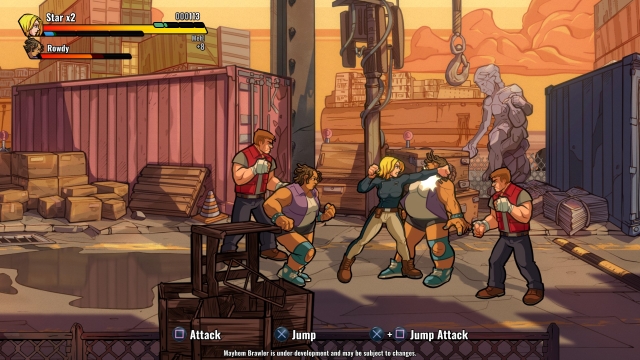 There are a few things that I would have liked to have seen in Mayhem Brawler. As the gameplay can get repetitive, I would have liked to have seen player level-ups, increasing strength or ability. Additionally, maybe new moves could be added to each character as you progressed through. As I mentioned above, I died a considerable amount, and I wouldn’t have minded a 1-up being available throughout the level instead of just at the boss battle.

Mayhem Brawler is a fun, energetic “beat-em-up” adventure. Its excellent art style, voice acting, and room for improvement excite me with what could be added through possible updates.