Konami have once again brought their greatest espionage warrior to the PSP. Metal Gear Solid: Peace Walker lets players jump into the boots of Snake in one of the series' most gripping titles to date.

Opting for the 60's "Snake Eater" version of our beloved Snake, the game takes us through lush jungle environments, utilising the camouflage system we saw back in Snake Eater on the Playstation 2. Throw in the threat of nuclear weapons, along with a plea of help from a small principality and Snake dons his bandanna and sets off to save the world..... again. From the offset it's clear that Kojima Productions are pushing the PSP hardware in terms of visual quality, while it's not the prettiest thing we've seen on Sony's handheld, it is up there amongst the big boys. From the thick foliage covered jungles, detailed character models and fluid animations, the game could teach some mainstream console titles a thing or two. Now due to the limitations of the UMD disc, gone are the heavily scripted/animated cut scenes that we associated with MGS titles, instead opting for narrated graphic novel-styled transitions which actually work really well for this game, they do not detract any atmosphere from the game at all.

Controls for the game is a mixed bag, you get plenty of options but I just feel that more thought could have gone into the control scheme as there is a very fine line on that analogue stick between sneaking up on an enemy and clomping around in clown shoes alerting everyone in a 15 mile radius. Also this makes aiming a bit of a chore, thankfully you may switch between full manual control or assisted lock on aiming, the latter being quite useful on the extravagant boss battles. Controlling the camera view with the face buttons isn't exactly ideal, and will take time to get used to, but as long as you don't go for the Rambo approach they are functional. 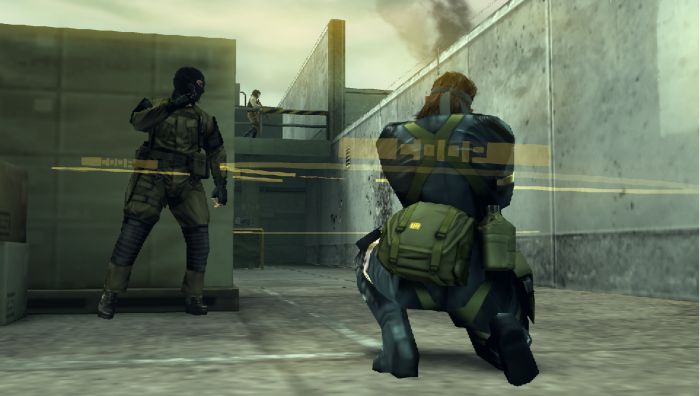 The campaign itself should take you around 20 or so hours, which in all honesty is a huge lifespan for a PSP title. Admittedly it's no where near touching RPG's in this respect but for an action title it's pretty impressive. Now this is just the start of things for Peace Walker, as there are literally hundreds of side missions contained in this UMD as you can create your own Metal Gear while simultaneously constructing your own army of up to 350 soldiers.

This meta-game takes place at your home base which you frequent between campaign critical missions has a distinct RPG flavour to it which can be quite addictive, if you're familiar with Kojima's previous PSP outing Portable Ops, you capture and rescue soldiers in the missions you undertake, these soldiers are then quite conveniently extracted by a weather balloon style transport and taken to your home base. Once you have the solders home safe and sound, you may set them to work researching gadgets, developing new weapons or cooking up some tasty treats for Snake to use on the field. However the user interface for this is quite cumbersome and not exactly user friendly but if you can navigate through the clutter, you will be rewarded with a very fulfilling experience.

Though as gripping as the story is, and as fun as the side games are, Peace Walker still has faults. To begin with the boss encounters, while entertaining, lack the inspiration which was noticeable in other MGS titles, you do not have the thrill of taking on an opponent like Psycho Mantis, you're limited to taking out tanks or other mechanical contraptions. Additionally these foes are a huge challenge to overcome on your own, some of which force you into a corner of sheer frustration as they are apparently designed for the co-op, with up to four participating on the bosses, via Ad-Hoc or wireless connections. To extend the multiplayer capabilities of the game, Extra Ops serves up training missions or operations for you all to play through, while having no bearing on the single player side of things they do have a lot of fun in store for the players. From target practice to fully fledged boss battles, also hidden away is even a tribute to Capcom's Monster Hunter title amongst the secrets of the game.

No doubt fans of the series will religiously go out and get this for their Snake fix and in most cases their experience will be very rewarding, we just feel that non-hardened MGS players may become frustrated at the difficulty of the bosses which may put them off future MGS titles which would not be fair on the franchise at all. There is plenty of wholesome good fun in this little UMD disc for people to get stuck into and is a title that people should let grace their PSP's at some point.

Konami have once again brought their greatest espionage warrior to the PSP.