Finally, we have a proper Metroid sequel, for too long have I yearned to find out what happened after the destruction of Zebes in Super Metroid back on the Super Nintendo in the 90's. Yes we've had Metroid games since then but they've never expanded directly on this story line, opting for a different arc in the tales of Samus Aran.

This installment into the Metroid series places the emphasis mainly upon Samus herself, with her narrating her past background, the emotions and personality of the famous bounty hunter shine through so much it's hard not to become attached to our protagonist. These narrations lead to some long winded but satisfying cut-scenes while playing the game.

The events of Other: M are set immediately after the epic battle with Mother Brain at the end of Super Metroid in where we see the baby Metroid sacrifice itself to save Samus before Mother Brain is exterminated. 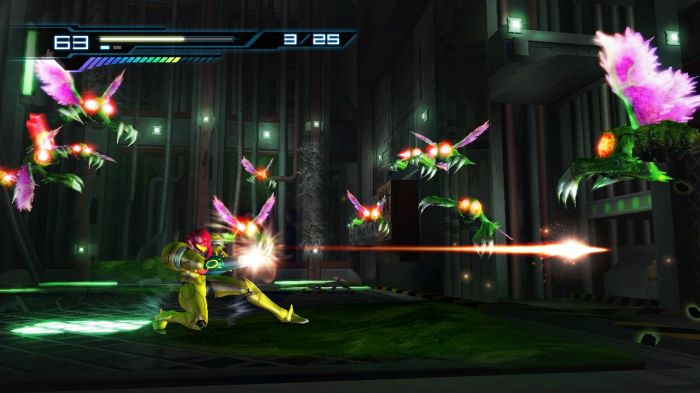 This is in a flashback dream for Samus as we kick off our adventure at the Galactic Federation, wrecovering from our previous ordeal. In a change of fortune, all the equipment obtained in Super Metroid, Varia Suit, Power Bomb etc. are still intact and usable, hurrah! So the "tutorial" level lets you get accustomed to the movement of the game which is handled purely by the Wii mote and works quite well. Hold it horizontally for general movement etc. while pointing it at the screen will switch the view to first person allowing you to look for secrets, specifically aim at targets and shoot things.

After getting the all clear from the medical staff you're then sent back out into the cosmos, searching for your next bounty, suddenly a distress call comes in from the "Bottle Ship". Samus refers to the distress call as "Baby's Cry", memories of the baby Metroid flood into Samus, instinctively she sets course to invesitgate the call. 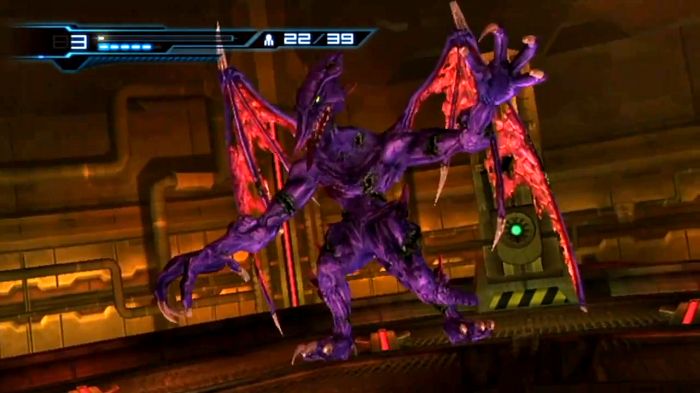 Once arriving at the station you encounter your old unit in the Galactic Federation, along with your old commanding officer Adam Malkovich. After kindly opening a door for the unit via one of your missiles, Adam then revokes the use of all your shiny weapons and tricks until he specifically authorises them, the cad!

As the game progresses your abilities become authorised by Adam, first of which is your standard missile, now I suppose this may irk those of an inquisitive nature and would rather search for their weapon upgrades and to a certain degree this removes part of the adventuring nature of previous titles and places you on a more linear path.
However, down to the sheer power of the story telling of this game, you kind of look over that fact and get sucked into the title quite deeply.

During your investigations it becomes apparent that while you thought you had exterminated all the Metroids, DNA taken from your suit after your recovery has been used in the replication and genetic engineering of Metroids. Couple this with the fact that long standing nemesis, Ripley, has been resurrected, the situation has become quite threatening. Visually, Team Ninja have done an outstanding job. The detailing on the main characters, level design and overall look of the Bottle Ship, looming corridors, and the various environments based upon what you experienced back on Planet Zebes. While you may think the starting parts of the game seem quite dull due to the grey's and occasional neon lights of the corridors, things do quickly change and pretty much sets a bench mark for other developers to step upto. Admittedly it's not Monster Hunter Tri pretty but its not far from it.

The cut scenes also look seamless, thanks to D-Rockets, with little to no graphical degradation which is impressive for running on the Wii hardware, additionally the switch from CG to ingame on the few occasions it happens is smooth and fault free.

One of the major changes between this version and all other Metroid titles is down to voice acting, finally Samus gets a voice, and having played this franchise over many years and now eventually putting a voice to the character is certainly a moment to savour. Her cold delivery suits the aura that surrounds Samus, yet still retains a certain innocence locked away deep down. 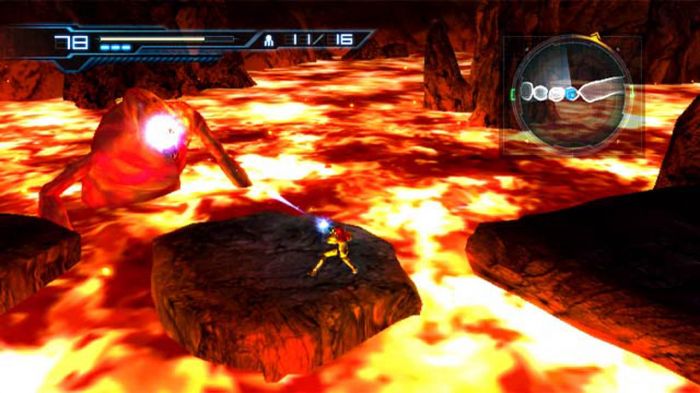 Additionally the classic set pieces you hear after acquiring a new missile pack/health tank, the main theme and loading the game have thankfully returned from their 16-bit days, though the rest of the game while fully orchestrated does not seem to be as iconic as the Super Metroid music we've all experienced.

Other new additions to this Metroid outing are the finishing moves Samus can perform on enemies, simply charging up her beam weapon and running to the mob will activate a nifty agile leap on top of the foe, release the charge and you unleash a devastating attack which in its majority will kill an opponent. Also the sheer swiftness of Samus running around the levels may come as a surprise to veteran players, as now you may dodge incoming attacks with ease due to Samus's new found agility, it changes gameplay immensely. 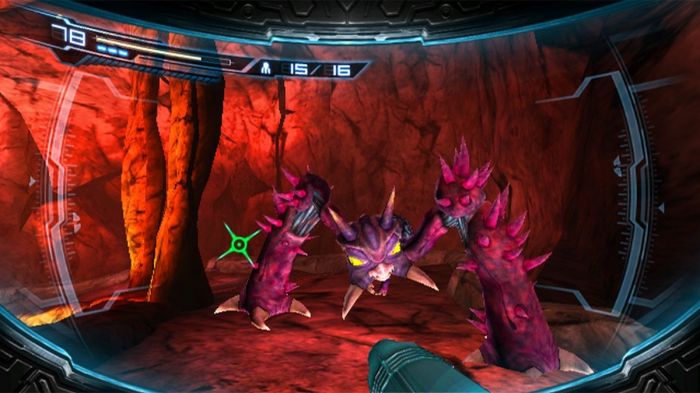 Boss battles within the game require a mixture of running around, dodging attacks and pinpoint accuracy on your shots, so you cannot just stand and shoot like crazy you do have to utilise all of your skills which you have learned throughout the game, the team really have thought about these encounters to make sure that they are challenging yet rewarding to the player after they have overcame the problem.

For example the fight with Ripley requires you to avoid a flame blast, avoid tail spikes while charging up your beam weapon or getting an accurate super missile into the chest of Ripley in-between flame blasts, it definitely makes you work for your boss kills.
But the downfall of these battles is that you're shown or told what the weak spot is on these encounters which removes the challenge of discovering where to hit a boss, it's more of a case of avoiding till the point is exposed.

There is certainly enough game time held witihin the disc to keep you going for a good 15 hours or longer which is cracking value considering the price point of the title, it also makes a refreshing change that the Wii has a decent release emerge opposed to the myriad of shovelware titles that just emphasises the gimmicky impression people have when they think of the Wii.

Overall Metroid is a solid title that should adorn the collection of any Wii gamer out there.

Finally, we have a proper Metroid sequel, for too long have I yearned to find out what happened after the destruction of Zebes in Super Metroid back on the Super Nintendo in the 90's. Yes we've had Metroid games since then but they've never expanded directly on this story line, opting for a different arc in the tales of Samus Aran.