Might & Magic X Legacy brings the old-school RPG to the modern day, harking back to the days when the fate of your heroes rested on meticulous consideration of stats screens and skill progressions, and where death was only ever a moment away.

An introduction sequence casually introduces you to a world of holy wars, fallen angels and empires on the brink of collapse before dropping your four characters, the traditional party of heroes looking for adventure, into the town of Sorpigal by the Sea to begin your journey.

The setting itself sounds epic on the surface; in the aftermath of a holy war and following radical government reformation, an empire stands on the brink of fracture. Rebellious influences are rising, and whole cities stand ready to usurp and declare independence. In truth, it’s largely forgettable and predictable stuff that serves the purpose of taking your four heroes and plopping them down where the action is. Perhaps the most important choice made in the game, and the biggest factor influencing your potential for success or failure, is made at the very beginning: the creation of your party of adventurers. There are four races of hero to choose from - human, dwarf, elf and orc - and each of these races offers three character classes for consideration.

A total of 12 available classes is itself a fair amount, but the strength of the system comes from its adaptability. While each hero belongs to a specific class, the skills and abilities available to choose from are multitude and each adventurer can be heavily tailored to suit a specific playstyle or strategy. It is essential to success to make sure your group is well balanced and able to fill a variety of different roles.

The detail and thoughtfulness of this system could be touted as a great success, but it can also be seen as a significant weakness. The complexity involved in character creation is not an intuitive process, nor is it one that is ever suitably explained to the player. Given that poor party design is guaranteed to get you killed, and that every point invested is final, it’s all too easy for the novice player to screw things up to the point where things are unwinnable from the start. 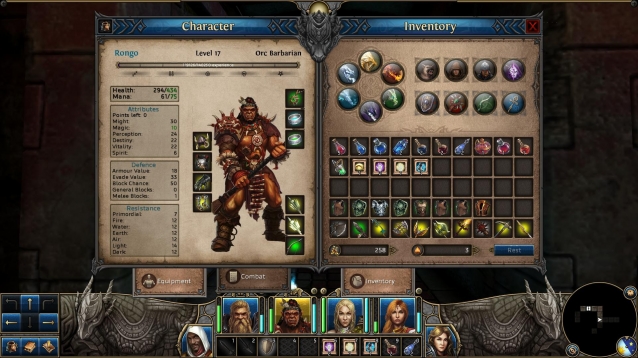 The complexity, of course, leaks its way through into the levelling up system, which throws a number of options at you, again with little explanation. There is no way to reset points invested unwisely, so you are stuck with the choices you make and unwise decisions will hurt you permanently. Again, it’s a damningly difficult system that carries the potential to damage the game experience.

As a result, the first hurdle in getting to enjoy Legacy is getting past the first couple of false starts that come as a result from messing up the party creation, or fluffing the first few level ups, until eventually you find something that works.

Once you do, you are treated to a delightfully old-school experience. You play from a first-person perspective, with all four of your characters existing behind the camera, and everything about the game is turn-based. The game’s relatively small open world is designed on a grid system, with four directions of movement. Having your movement locked to an axis is unusual at first, but you soon get used to it and moving around becomes second nature. The turn-based system is deceptive here, as moving around is quick and easy, which creates the illusion of real-time action. However, every time you move from one grid square to another, a short period of time will pass, your heroes will tire a little more, and you’ll creep ever closer to delving into your provisions. 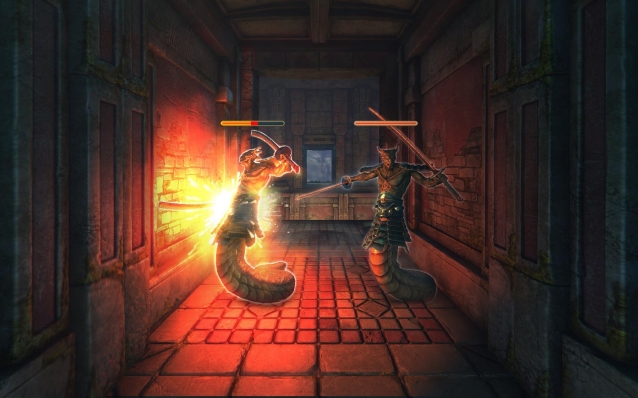 The presentation is as equally ‘retro’ as the gameplay. Character models are good enough, but animation is lacking in most respects. The majority of conversations take place in text-only form, and spoken dialogue only rarely encountered. Combat is a plethora of numbers, health bars, more numbers, and constant effect notifications all splashing up against the screen.

As would be expected from a game with its roots in the old-school, combat can be brutally difficult, and requires that the player carefully consider each move, whether that be to cast a spell, guzzle a potion, or initiate a task. Status effects are a must, and no adventurer will get far without the ability to boost the party’s abilities, or to drain those of enemies (and preferably both). This can lead to some particularly satisfying encounters, where skilfully managing offense, defense, magic and item usage leads to a hard-fought and well-earned victory over the odds.

However, your enemies will frequently use cheap tricks to get the better of you even when you are employing almost flawless strategy. Firstly, it’s easy to get overwhelmed by sheer numbers despite perfect planning, as once combat begins it’s not uncommon for enemies to appear out of nowhere and surround you, making it difficult to plan your encounters and ensure you are fighting on your own terms. Status effects are prominent and devastating, and a huge proportion of enemies are able to trigger poison and disease effects that can cripple a group unless they have a skilled and levelled healer, or a huge stock of curative potions, which don’t come cheap. It seems that the majority of enemies have one particularly devastating attack that they utilise, seemingly, at random. In most encounters, it is manageable, but all it takes is for an enemy, or group of enemies, to spam off a number of these power attacks in quick succession and you’ll find yourself in a desperate situation through little fault of your own.

Might & Magic X Legacy is difficult to recommend. Clearly, the game has been designed as a homage to the retro RPG, and in this it succeeds entirely. However, this comes at a price, as when replicating everything enjoyable about the old-school, Limbic Entertainment have simultaneously duplicated the old flaws of those same games. With artificial difficulty spikes, lacklustre presentation, and the presence of complicated systems with no explanations offered, Might & Magic X frustrates as often as it entertains. It is the best, and worst, of an old generation.

In replicating everything enjoyable about the old-school, Limbic Entertainment have simultaneously duplicated the old flaws of those same games. With artificial difficulty spikes, lacklustre presentation, and the presence of complicated systems with no explanations offered, Might & Magic X frustrates as often as it entertains. It is the best, and worst, of an old generation.