Let’s make one thing clear off the bat, this game expects you to tap female characters a lot and it might make you very uncomfortable. It knows it’s full of fanservice and revels in it so if you aren’t comfortable with the common ecchi and harem anime tropes of panty shots, lewd behaviour and the like then this game really isn’t for you.

With that out of the way, is Moero Crystal H worth your time if you are looking for a Japanese style dungeon crawler or is it not worth the funny looks you’ll inevitably garner if you play in public? Moero Crystal H is the third in a series of Compile Heart RPGs that focus on recruiting and battling with a variety of monster girls. Crystal H, like Chronicle before it, is a grid-based dungeon crawler and sees you trying to recover the Dark Bra as it's been stolen and separated from the mystical Light Panties, thereby endangering the whole world..

As you can probably tell the story is silly nonsense and is just an excuse to get you wandering floors of themed dungeons trying to “tame” monster girls as you track down the thief. The lewdness of Moero Crystal H is pretty extreme, to the point where your actions result in characters mentioning being violated casually in their conversations.

Understandably this could make you very uncomfortable playing this, I’m not sure why they felt the need to take the generally lighthearted and silly anime lewd tropes and ramp it up in this way but it negatively detracts from the experience. 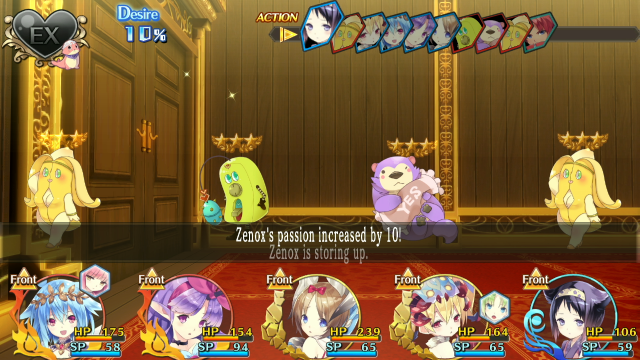 The dungeon crawling itself is extremely basic and by the numbers, you’ll explore themed dungeons split into floors full of random encounters as well as fixed spots where you’ll find loot or special encounters. Each dungeon has a theme; toybox, pirate ship and casino for example but they are dull to explore and are exceptionally simple with very few if any actual gimmicks to make them stand out.

The combat is likewise just as plain. It’s about as standard a turn-based battle system as you could create. Moves have elements assigned to them and each of the monster girls has a type, target a specific weakness and you do more damage and can unleash special moves based on sexual positions.

In each dungeon are a number of monster girls for you to recruit. In this game they have been corrupted by having the Dark Bra forced upon them causing them to see the darkness around them. When you encounter these girls you battle them and try to raise an excitement meter by destroying their clothing, upon doing so you can either capture them assuming you have a crystal and recruit them later or recruit them now by tapping on three specific sensitive spots (that differ for each girl) before a timer runs out. 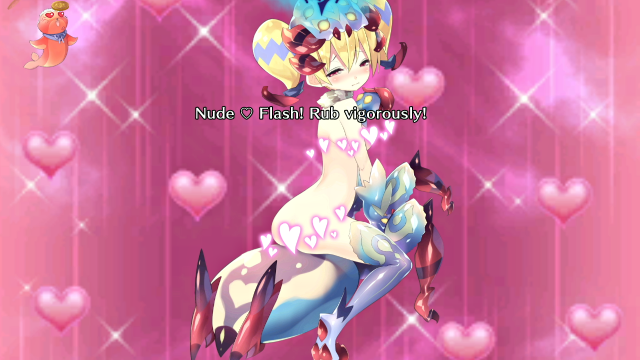 Doing so rewards you with a “Nude Flash” (that isn’t totally nude as it covers up sensitive parts with hearts at least) and you then gain them in your party. This is where they’ll often react negatively to your rescuing of them by pointing out how uncomfortable and violating the experience was (made worse by the fact you force them to wear the Light Panties to reverse the darkness).

The characters are actually quite interesting, with many of the eighty monster girls having scenes together when you return to the inn after each dungeon sortie. Their dialogue is often funny and they have a lot of personality, the sheer amount of these is mind-boggling as it seems almost every combination has at least some interaction. Unfortunately what interesting development there is is undermined by the tonal whiplash between these scenes and the rest of the game.

The inn is also where you raise your intimacy level with each girl by offering her gifts, chatting and getting her to open up (quite literally) by taking part in a shoot ‘em up mini game where you literally shoot white cloud-like projectiles at intimate areas to open up holes you go into to get to know her better. I’m not a prude by any stretch and have played my fair share of lewd RPGs in the past but at times Moero Crystal H goes a touch too far. The monster girls are interesting enough that they’d make up for the bland, paint by numbers dungeon crawling and battling but the whole affair just feels awkward.

The game itself is distinctly average and there are far better examples of both ecchi-focused and dungeon-crawling gameplay. I’d only suggest picking up Moero Crystal H if you are trying to own every Compile Heart title or are a huge fan of the prior entries in the series.

A bland, average dungeon crawler with some interesting characters that many will find uncomfortable to play through. Unnecessarily pushes boundaries of acceptability with regards to its lewd content.

Moero Crystal H Is Coming To Switch Later This Year