Take a look at this screenshot: - Yes, Monochroma looks a little like Limbo, and probably draws some inspiration from it. Now that we've got the inevitable comparison out of the way early, let's look at the game itself.

Monochroma is a side-scrolling puzzle/platformer that is light on plot, but heavy on atmosphere. As an unnamed child protagonist, your character must attempt to navigate obstacles and dangers, all the while trying to get his equally unnamed little brother to safety.

Gameplay truly is minimalistic, and with the exception of your movement controls there are only two buttons: an action button, used to push and pull objects, and a button to pick up or put down your practically immobile little brother.

Many of the puzzles encountered focus on finding a way to get your brother through various obstacle blocking your path. When carrying your sibling, you cannot run as fast nor jump as high as when solo. Many puzzles, therefore, consist of having to drop him off so you can move ahead and figure a way to open an alternative path, in order to return and collect him. Little bro appears to be afraid of the dark, and can only be put down in areas where spotlights are shining. He also won't move of his own accord, so once you drop him he will remain in place, even in the face of great danger, until you come back to retrieve him.

It does seem a little arbitrary that you can only put your brother down in well lit places, which are often the only dangerous place in a room, and that he seemingly cannot walk away from danger despite clearly being seen flying a kite at the beginning of the game. Yes, this allows the creation of clever puzzles, but it is a very 'gamey' system and detracts to some degree from the overall atmosphere; which is probably Monochroma’s greatest strength.

Puzzles are never overly complicated or convoluted and, while some are challenging, they are generally able to be worked out by applying some simple logic rather than having to resort to frustrating trial and error. In between these puzzles, and sometimes during, there will be some running and platforming action to keep the pace up. 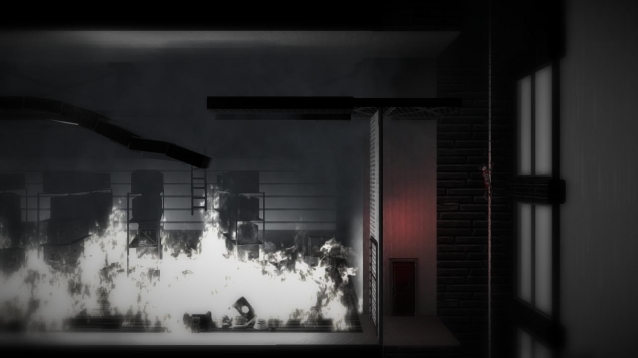 The bleakness in which our heroes reside is perfectly captured in the mostly-grey world of empty factories, derelict shopping centres and abandoned cities. These black-and-white environments are contrasted with the occasional glimpse of scarlet red, and the constant rain pouring in the outdoor areas serves to reinforce the sense of depression and loss of hope.

Sound is equally important to the overall feel. Noise is limited and often there will be little to accompany you, other than the constant patter of rain. Most of the time you will be without background music, but testament to how well the score fits the on-screen action is that you barely notice when the music kicks in, or fades away. It fits so well as part of the whole, that it is difficult to separate it from everything else.

The one area where presentation falls short is the death animations, which sees the character simply fall limply to the ground each time (barring a couple of specific exceptions). It looks odd, almost as if he's fallen asleep on the spot, and is particularly out of place during long falls, in which he lands perfectly then slowly topples over. A minor, but noticeable, complaint in otherwise stellar presentation. Unfortunately, good puzzles and great environments are not enough to rescue Monochroma from its biggest flaw - uncomfortable and unresponsive controls.

It's almost as if the game suffers from control lag, in that all responses to actions appear to occur a split second after the input is pressed. Jumping occurs almost in slow motion, with an odd 'floatiness' to a leap. Finally, the hero seems to have trouble grabbing certain climbable ledges and objects, or dropping from them in a predictable manner.

To let one single complaint against the game tarnish the overall experience may appear nitpicky, but having decent control responses can make or break a game, and in this case it, regretfully, does the latter.

Too many sequences in Monochroma are reliant on either speed or precision, and you'll suffer many, many deaths trying to execute these manoeuvers due to clumsy jumps, missed handholds and accidental falls. During these segments of play, you will curse the controls that seem determined to undermine your performance, and you will die. Again. And again. And again. At least the checkpointing system is generous, and you'll never find yourself having to repeat many previous steps to catch up, but having tried time and time again to reach that one platform and hit that one switch, and failing through little fault on your part, you may find yourself at the limits of frustration and reaching for the proverbial off switch. Nowhere is this more apparent than at the ugly final boss fight, where the poor controls coupled with an inaccurate hit box and instant-kill attacks turn what should be an epic climax to a crushing exercise in angry repetition.

The last point to make is the relative brevity of the experience. Monochroma came in at around 3.5 hours. Considering the amount of time stuck on certain sections due to control issues, this likely represents around a straight 3 hours of content.

Rating Monochroma is difficult. As it stands at the time of writing, it cannot be recommended; and it must be reviewed based on how it is now. Fortunately, control issues are something that can (and should) be fixed with a post-release patch, and if that happens then this awkward experience could transform into a beautiful, if brief, journey.

This writers advice? Keep a close eye on Monochroma. If it's patched to fix the control issues, and if the feedback on the patch is good, then this is worth a solid 7.5. As it stands, Monochroma gets a...

Rating Monochroma is difficult. As it stands at the time of writing, it cannot be recommended; and it must be reviewed based on how it is now. Fortunately, control issues are something that can (and should) be fixed with a post-release patch, and if that happens then this awkward experience could transform into a beautiful, if brief, journey.