I’ve always been a big fan of racing games, ranging from F-Zero to Mario Kart, and more recently Hot Shots Racing and Forza 4. But I’ve never really played much for racing games that use monster trucks, unless you can count Stunt Race FX on the Nintendo 64. So I figured trying out Monster Jam Steel Titans 2 by Rainbow Studios would be an interesting challenge. How different could driving a monster truck be from driving a race car?

As soon as the game begins you meet T.I.N.A. This acronym stands for Truck Instructional Navigational Assistant. T.I.N.A. will get you started by performing simple tasks with your monster truck so you get a feel of how the controls work. First up is learning which button controls the gas, and which button is reverse and brake. Once you have these bare essentials down, then you can move onto the more fun and difficult stuff. 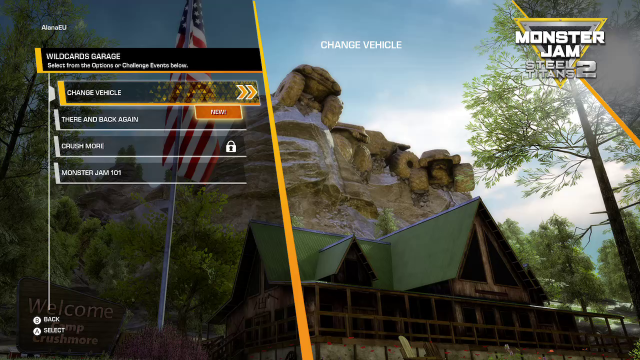 Steering is a little bit different than you may have experienced in a game before. The front and back tyres are each controlled by a separate thumbstick. After a few laps around the track you will get to moving the thumbsticks in unison to make the tighter curves. Steering like this also allows you to easily do donuts to impress the crowd by holding the gas and cranking your front set of tyres to the side. Once you learn that move, T.I.N.A. tosses you down on your side to learn how to do a side spin to get back upright onto your wheels. The tutorial is incredibly short, but if you want to learn more you can play through the Monster Jam 101. 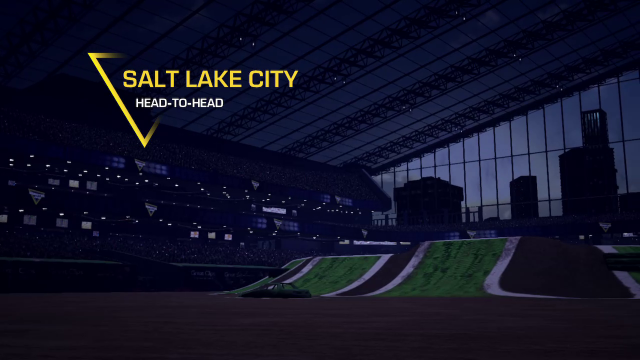 Once the tutorial is complete you move onto the World Career Mode, which has eight locked chapters to be unlocked. Each chapter has the choice of three difficulties and the option to select your vehicle. At first you can only choose between the Monster Jam Training Truck and the Monster Jam Stunt Truck. Each vehicle displays their Engine, Transmission, Suspension, Tires and Chassis stats and the vehicle can be levelled up the more you use them. If you want to change your driver you have the choice to be a male or female racer. There is no customising the character at all; they just have their default black and one colour outfit. The Career Mode starts with a Head-To-Head race. Monster Jam has you do a practice event so you understand what you are supposed to do for the real race against your opponent. The track is just a simple oval and you just have to be sure to follow the guide and make sure you stay on the in-bounds on the track. This is set up in tournament format, so once you beat your first opponent, there are a few more races to win to get through the first chapter of your career. All of your opponents have cool looking, brightly decorated trucks which look awesome compared to the plain grey and black monster truck that you are driving. 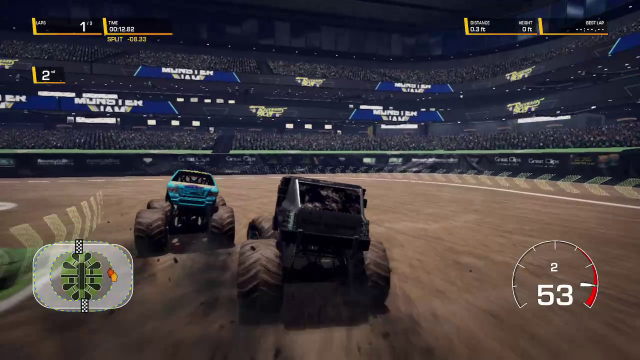 Next up is a Freestyle Event. Here you soon learn that people aren’t coming to the arena to watch a bunch of monster trucks drive slowly around the track. They want fun and exciting stunts. Plus they want to see a lot of smashing, doesn’t matter what it is, as long as the monster truck squashes and smashes it into pieces. Here it felt like I was mashing random buttons long with doing the usual donut to perform different combos like the cyclone. If you smash into one of the green containers spread around the track you can flip and make the crowd go crazy and try to go into a spin. 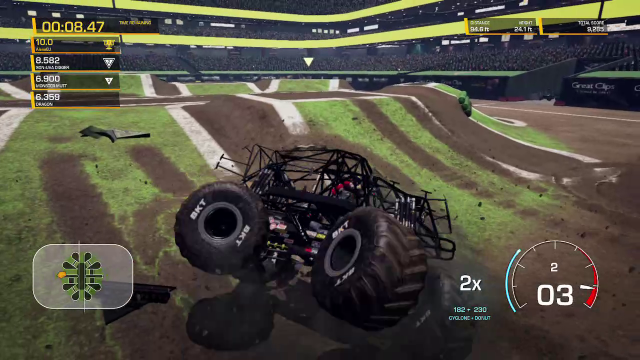 Monster Jam Steel Titans 2 can be enjoyed in handheld mode or hooked up to the TV. I don’t play games in handheld mode very often as I am usually at home and have access to a screen. So when I tried Monster Jam handheld I found it a bit tricky to hold, so I preferred having the Switch docked. The frame rate seemed alright, but not super smooth like you may expect but it was still playable. The game looks alright, it’s definitely not as polished as something like Forza 4 would be and the racers always have their track uniforms and helmets on so there are no facial features or personality. In career mode, when your character wins it is always the same animation reused over again. But unfortunately the animation isn’t the only thing that is reused. Every race in that chapter has the exact same music, so it gets incredibly repetitive fast. 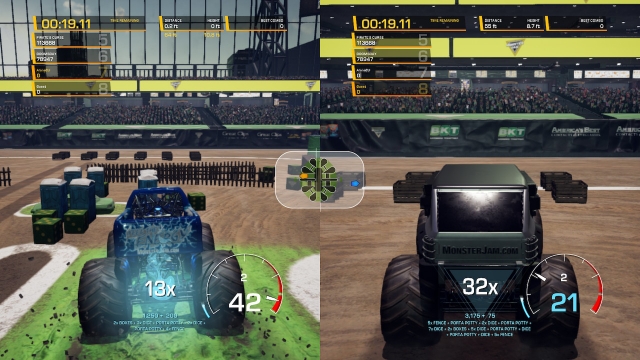 After playing Monster Jam Steel Titans 2, I felt the game was very meh. There wasn’t anything really fun or exciting, and it got very repetitive after a while. There is a split-screen and online multiplayer option. Playing co-op with someone added to the fun, but when I tried to play online I couldn’t find any opponents. I appreciate that the game has challenges like finding the lost Crazy Creatures by finding the X’s on the spot. But I think it would have been a better idea to focus on having a vehicle customisation option right from the very beginning. It’s a lot of fun being able to make your monster truck or vehicle completely your own instead of just bland and boring.

Monster Jam Steel Titans 2 is an alright game, but lack of customisation options and a lot of repetitive animations, music and levels make it get boring very quick. It doesn’t make you want to come back for more.