I have never driven a motorcycle. Never touched one, I haven't even gotten behind the wheel of a car. So coming into Motorcycle Mechanic Simulator 2021, I had zero experience in repairing a motorcycle.

Developed by Play2Chill S.A., it puts you into the shoes of an up-and-coming motorcycle mechanic, starting you out at home in your garage. Your mission is to make money fixing up bikes, slowly moving your way up in the world and eventually making your own motorcycle to be proud of. Now, this is obviously inspired by Red Dot Games’ Car Mechanic Simulator series, which makes sense since both are published by PlayWay S.A. And just because they’re simulators doesn’t mean they’re all that bad; they’re actually quite fun. This game is mostly about looking around the motorcycle and replacing parts. If you have no idea what the heck is a brake pad front left right (yes, that is what it is labelled), the game at least helps you by giving you the names of everything and marks the worn out parts as red when you use the examination mode. It will also tell you if you forgot a part when assembling the bike back into full shape. You cannot drive or finish a mission without fully assembling the bike back the way it was. However, the colour of the missing parts can be easy to miss, especially when the motorcycle is the same light blue as the highlights. I checked the options and there didn’t seem to be any sort of way to change the colour.

Missions are pretty much all the same. You’ll need to change out parts, paint some fenders, fix up tyres, all that jazz. Sometimes, missions will have a bonus objective that’s a lot more vague. For example, one client reported that the engine lost power and would stall occasionally. I actually liked these. You don’t have to do them, but it was fun trying to find that part that was causing the problem. I actually felt like a mechanic when I found that the air flow meter was at 40%. It might require some real world knowledge of motorcycles, which is pretty cool in my book.

You can drive your client's (or your own) motorcycle around in two specific maps. It controls fine, if a little too wonky for my liking, especially on a controller. It also has some goofy ragdoll physics for when you crash into a barrier. There is a purpose to this. It's not necessary, but you identify what’s wrong with a bike by performing short tests. It won’t reveal everything but it’s still a great help for finding worn out parts or for fine tuning. 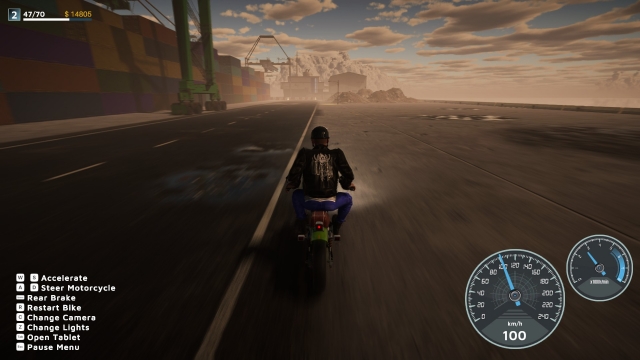 Driving is wonky, but it serves its purpose.

As you work on more motorcycles and complete missions, you gain experience, level up and unlock skills that make your job a little easier, like identifying a number of parts without needing to examine them. However, I had more skill points than I could spend so I’d usually unlock them all. You also gain experience in passive skills just by doing your job. You can screw faster, buy parts more cheaply, and earn more money from missions when you do those tasks. It’s neat, that’s all I can say about it.

Now, you can buy fresh replacement parts from the shop, or you can take a trip to the junkyard where you can find parts for cheap. The parts are randomised and most of them are in need of repair, but sometimes you might get a fresh part lying around and, with the right upgrade, it might be given away for free. You can also find entire motorcycles there, but most of them have missing parts, and whatever parts that are there are in poor condition. If you have the money and the time, though, it is very possible to make it as good as new. From there, you can auction it off for a nice profit.

The game actually has a surprisingly deep motorcycle customisation. With tons of different parts and every paintable cover having quite a few options, you can probably create your dream bike virtually. I highly encourage you to try it out in the sandbox mode where everything is unlocked and free to use.

I would describe this game as therapeutic. There's nothing quite like fixing up a bike piece by piece, testing it out and then giving it back to the owner. You start to learn and remember where each part is on particular bikes. I found myself being able to figure out the bonus objectives just by using what I learned about other motorcycles and then finding the worn out part. I was learning; engines still give me a headache, but at least I know what I'm doing in most cases. 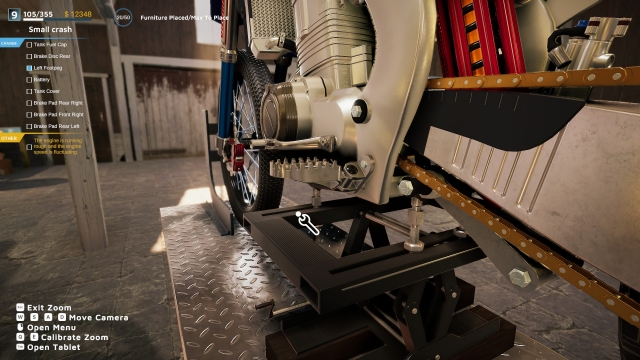 Bonus missions are fun to figure out on your own.

I do have some gripes with the game however. Loading time is a little annoying–it takes a few seconds longer than I'd like–and my game would stutter if I turned around too fast. After I moved out of the home garage and into a warehouse, after testing a bike I would be placed back at the starting area, meaning I would have to go through another loading screen to go and check on the bike. Annoying, but isn't as bothersome as you think. I should also admit that I was playing on Ultra graphic settings.

Motorcycle Mechanic Simulator 2021 is an oddly calming game that made me lose track of time. Taking motorcycles apart and putting them back together again is simple, but I never found myself bored. Everything you do contributes towards something, where eventually you can turn a piece of rust from the junkyard into something you'd display at a showcase. It's not a game for everyone, but give it shot. It can surprise you. Even now as I’m writing this, I want to go back and finish the campaign so I can focus on creating a really good bike.

Motorcycle Mechanic Simulator 2021 is a surprisingly calming game that teaches you more about motorcycles, with deep customisation and attention to detail that could make you lose hours of your life.