Can style and substance coexist together in a balanced relationship? Or does one side slip a little whilst the other takes all the glory? It can be pretty difficult to gain a balance between the two but when you do, fantastic things happen.
The good news is Muramasa: Demon Blade is right up there with the best of them in regards to style but the bad news, the game play severely lacks substance. 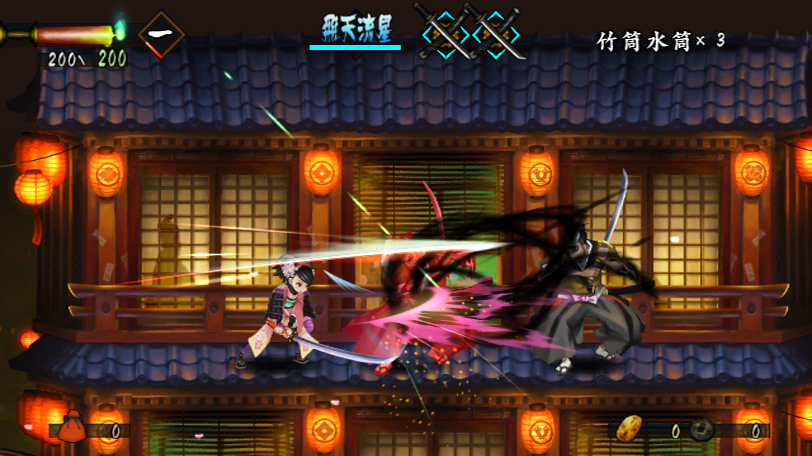 Muramasa tells the rather confusing stories of Momohime, a princess possessed by Jinkuro, the evil soul of a skilled swordsman and Kisuke, a ninja with no memories of his past, on a mission to find out who he is.
Occasionally these 2 stories cross paths, so you have to complete both stories to find out everything that is going on.

When I say a confusing story, I mean that I still don’t really have the faintest idea of what is really going on. Sure I know the initial story but everything else that seems to happen in between appears to be complete and utter nonsense to me. Characters name drop people and places as if you are meant to know who/where they are via use of a crystal ball and nobody likes to explain anything to you. One minute i am going after the entitled Demon Blade and the next I am hunting down a man who has killed my family. Exactly when this slaughter happened I have no idea but suddenly we want to avenge it. I love my tales from the east and Oriental adventures but even I found it really hard to keep up with this story. For hardcore story lovers there’s plenty to try and get your head around but for me it just kind of ruins the experience a bit. 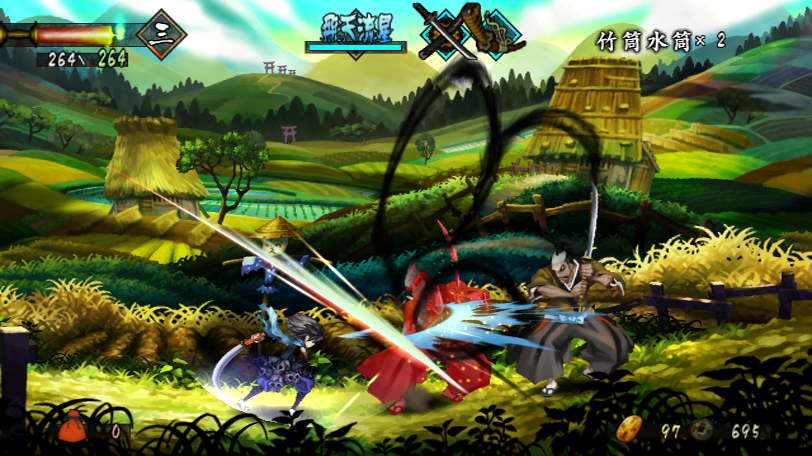 Getting past the story, we have the actual gameplay. This is the area I found to be most lacking on this game. The vast majority of your time is spent running through 2D scenes to get to the end. There’s only so many times you can run from the right hand side to the left hand side of a screen only to do the same for the next 12 screens without getting incredibly bored. To add insult to injury, most of the scenes are exactly the same as the previous one so it just feels like your running through the same screen again and again.

The fights are where things really step up a gear though. Muramasa is a 2D slash em up and there’s plenty of hacking and slashing to be done here. There are many moves at your disposal, all graphically pleasing and very easy to pull off. Fights are done by using your Nunchuk controller to move and the Wii remotes buttons to attack. It’s all very simple but it is fantastic fun to dart around the screen landing attack after beautiful deadly attack. In a fantastic twist, the fun is increased by the fact that your character can have 3 swords at a time equipped. Each sword has its own special move that’s pulled off by hitting the B button making them more deadly. On the flip side of things though, is the fact that your beloved weapons can break.

Weapons have a health bar and for every hit that’s landed, every attack that’s blocked and every special move that’s pulled off your sword degrades a little until eventually… Snap.
But its ok all is not lost, just press the C button on your Nunchuk and you can unsheathe one of the other 2 swords that you equipped whilst the other on is being fixed automatically. Fights are incredibly fun, but no real skill is needed here. Just button mashing your way to victory is often the quickest and easiest way to do things. Boss fights make you strategise more, but it’s still possible to get through the vast majority of them just hammering the A button to attack, using your special moves and switching swords.
After your fights you’re given a RPG like battle round-up where exp is awarded to help your character grow and any items are claimed. This is where the RPG similarities end and the boring running through screens begins again.

This to me is where the substance side of the game dies and all you’re left with is style. But wow, what a style that is. This is easily one of the nicest looking games I have seen in quite some time. Screen shots really do not do it any justice at all.
Vanillaware really have captured the eastern spirit in this game, from fields of magical looking cherry blossom trees to authentic looking towns and villages, this game drips with Oriental atmosphere and beauty.

Character sprites are incredibly well designed also with both main characters animated and designed well, both fitting in nicely with the overall graphical style.

My only complaint with the way the game looks refers me back to the running endlessly through the same screen. There are a lot of repetitive backgrounds. Its almost like Vanillaware are aware of how well they have done creating some of these backgrounds so decided to use them again multiple times in a row. This made me, in the end, switch off from how beautiful the game is because I got sick and tired of seeing the same things over and over, so I didn’t appreciate the new backgrounds. Japanese voice acting (with English subtitles) really adds to the games authenticity and adds to the overall style of the game. That with a pretty soundtrack makes it an enjoyable experience to listen to at least. All of the sounds you would expect to hear from a game/movie from the Orient are there. Gentle, simple sounds which are calming and relaxing and rousing orchestral pieces when fighting.

With the aim of adding to the games playability, the ability to forge your own swords is added in the pause menu. This is done via an umbrella graph kind of system, when you make one you unlock another 3 and so on so forth. I found myself completely uninterested in this system to be honest. The swords you get given for beating bosses are actually better than the majority you can make - although it is possible to change your games ending when you collect a certain amount of swords. 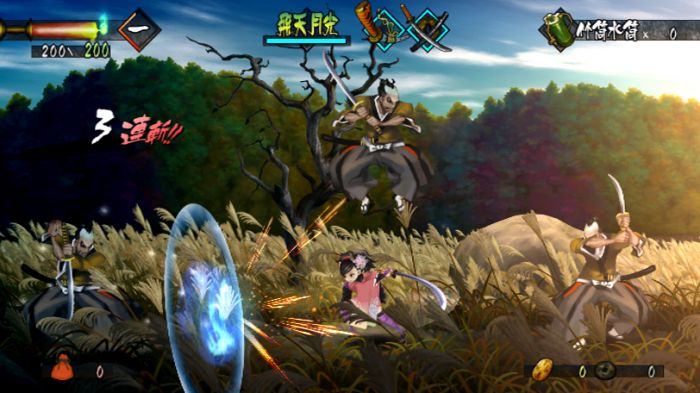 All in all Muramasa is a beautiful game, possibly the most beautiful game to date on the Wii but it really lacks in gameplay.
I found the experience to be very boring unless I was in a fight where it becomes great fun. The ability to play as two different characters is a nice idea but to me, I couldn’t see any difference in how they played, so I wonder what the point is. Especially annoying is the fact that beating the game with both characters is doable in 10 hours or under (on easy mode) which is incredibly short.
If you can get past the confusing story and general repetitiveness then this is a fun game, I can’t help but feel though that if the same level of commitment was put into how the game plays as it was how it looks we would have a great game on our hands.
Instead, sadly, it all feels very hollow.

Can style and substance coexist together in a balanced relationship? Or does one side slip a little whilst the other takes all the glory? It can be pretty difficult to gain a balance between the two but when you do, fantastic things happen.

cheers for the review, some nice details put in there. Quite temped to try this one now

Ill send you it back hun if you want? Gottab send you lego anyways :)