The Trials series of games have the motorcycle game tied down on console with RedLynx’s popular franchise seemingly having perfected the mix of physics and action. Can Saber Interactive’s attempt at the genre stand up to that series?

MX Nitro makes a strong first impression: visually the menus, transitions and the overall aesthetic look very polished, this continues into the game itself which has a very pretty art style. 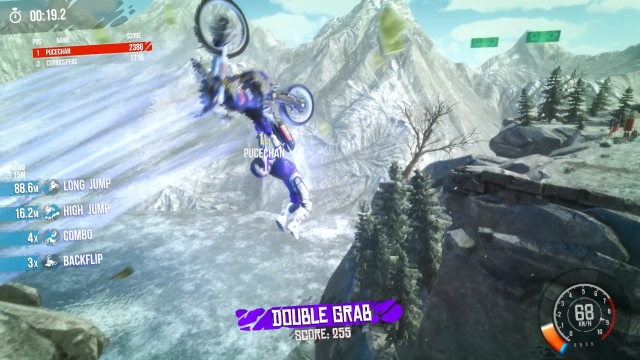 So it looks nice but what about the game itself? MX Nitro features two game modes, a Career mode consisting of thirteen areas each with four stages and an Online Race mode. The Career mode has a simple but functional progression system where each area you visit has three races and a “boss fight”. The races have a variety of types from your basic race and points based events through to ones where you have to synchronise your tricks with a partner racer.

The game has a basic upgrade system with five different bikes, some more suitable to some race types than others, that can have their stats boosted by specific amounts. Unfortunately, this area could have been a little more interesting if it let you decide what areas to improve, sadly you just make the bike “better” in a blanket fashion. There is also little else to spend your in-game currency on, with bike upgrades and avatar customisation being the only options. 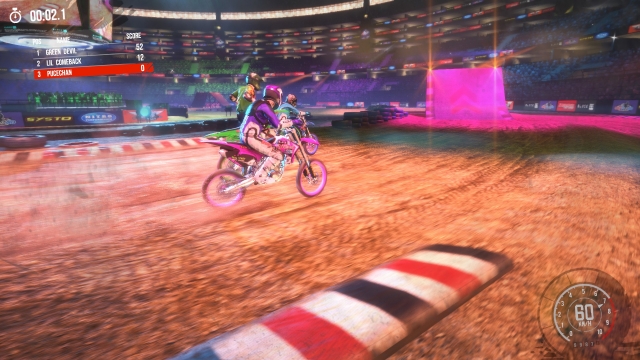 Actual races are a lot of fun, rather than being about precision terrain navigation like the Trials series, MX Nitro tends to focus on more realistic environments with an emphasis on performing tricks to fill up your boost meter. Like Trials it also tows the line between being frustratingly hard and extremely satisfying, with the same quick restart design that means you either know this is for you or not. When you break your rider’s neck for the fiftieth time you do start to feel sorry for the poor chap and his life decisions.

The other game mode, Online Race is actually a Ghost mode rather than against other players live. As you progress through the Career mode you unlock tracks for this mode and race against other players attempts. You can see how you rank compared to others but there isn’t really much to it unfortunately. It’s nice it is in here but it feels a little limp. 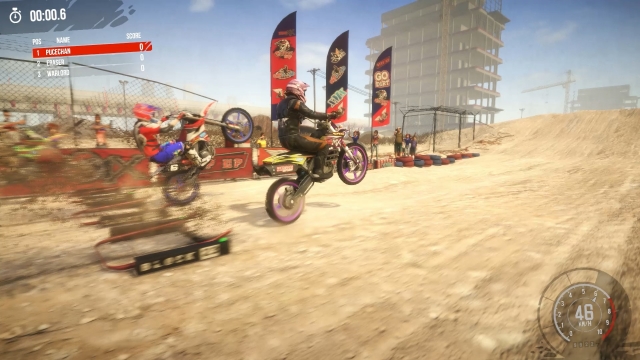 The game’s environments are varied and all look beautiful, from alpine hills to industrial sandy areas to garishly lit motocross arenas, there are a lot of places to zip through and admire as you perform amazingly improbable stunts on your path to winning. The audio is also pretty solid and whilst the music isn’t too memorable it’s pleasant enough to listen to whilst playing.

MX Nitro is a competent, fun but ultimately an unremarkable game. The difficulty curve ramps up considerably after the first few sets of races and it doesn’t really have a unique hook to grab you with. But what it does do it does remarkably well. If you are after a motorcycle title then MX Nitro is definitely worth a look.

Nitro is a challenging and fun motorcycle game that doesn’t really do much wrong, the difficulty curve and lack of bike customisation being the main standouts. It’s a really solid title that is well worth considering.