Five years after its initial reveal, Amazon Games’ MMO New World finally arrived. It was one of three games announced at the time, with the other two, Breakaway and Crucible, being cancelled in 2018 and 2020 respectively. After two beta sessions in early August and September, bricked graphics cards and delays, New World finally released.

Reviewing an MMO within a week of launch is a difficult process. These are versatile worlds that will undoubtedly change several times over the years. With that being said, there’s value in a strong game at launch. Ultimately, this is the platform that New World will hope to launch itself off during the games life cycle.

You start New World after your character survives a shipwreck, landing on the island of Aeternum. As is seemingly tradition with MMOs at this point, you start with pretty bare equipment and find some fella on the shore who wants to shower you with gifts. After that, you’re free to set off into the world around you. My early thoughts were mixed. The tutorial does a good job of introducing the game, but isn’t too bland in doing so. On the other hand, the character creator is pretty barebones. It holds the essentials for creating a character, sadly you’re not going to find yourself fuelled by creative freedom with this one.

Aeternum does look great though. Its dense environments really look great, especially for an MMO, with performance remaining strong for the most part. In fact, the only drop in performance I’ve noticed is in towns, which is usually caused by the sheer number of players. Those drops aren’t dreadful though, New World just happens to lose its usual smooth edge for brief periods. Everything looks great, with the general aesthetic doing a great job of building a fantasy version of the 17th century.

That fantasy world is something people are flocking to in droves, too. It would be remiss of me not to mention the achingly long queue times to access New World. Some players have reported up to an hour, or even two hours of waiting in some cases. I find this a tricky one to critique. On one hand, it’s infuriating that a player can spend their money to simply sit in queues all day - especially considering not everyone has the free time to wait hours before being able to actually play. On the other hand, long queues do indicate the game population is thriving. So many games of this type are dead on arrival, that maybe the long queue times are a worthy trade off. It’s certainly better than a game that’s dead on launch. 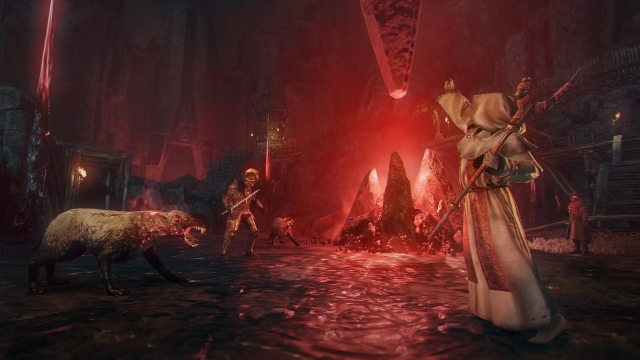 The wait time is worth it however, with an engaging combat system that ensures all of the various playstyles can have a good time. New World is action-orientated, so you’re not going to spend a lot of time fiddling to make your hot bar comfortable. Each playstyle is broken down into varying weapons, weapons you have to level up independently of your characters overall level. Similarly, players are required to level up individual skills too, such as fishing, wood cutting and so on. There’s no right way to approach New World. Following the main storyline quests is a fine way to start, but so is sticking to a town and levelling up the weapons and skills you’ll want to be using later into the game's content. Levelling up enough will lead to the player completing expeditions at level 25, which are basically the New World equivalent of dungeons or being able to craft higher end gear for their character.

Even after making your way to the level cap of 60 and upgrading all your gear, there’s still plenty to fight for in New World. Early on in the game, you're asked to side with one of three different factions. Once you’ve pledged your loyalty, you’ll notice that there are wars all over Aeternum as factions fight to control various cities. Battles for cities helps the post-game world feel alive, rather than just existing as a place to wait for new content. 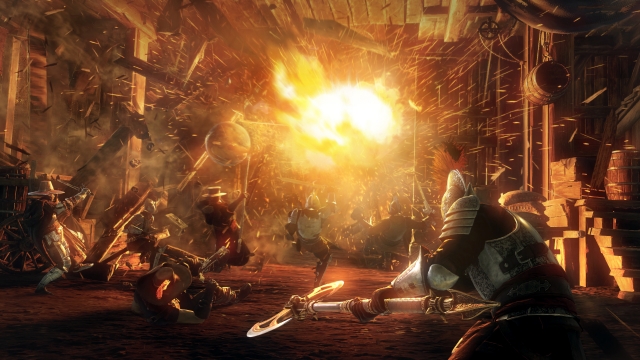 New World does come with its downsides of course. Outside of the queues which I mentioned earlier, the story is quite plain. I didn’t really take much of it in, with it very quickly becoming a case of claim quest and move on situation. Its lore is also lacking, although to give it the benefit of the doubt, it would seem like it’s laying the foundation for it to be expanded on in the future. Mediocre writing is made clearer by the lack of voice acting. It’s there in the early parts of the game but at some point it just vanishes, reappearing again from time to time. It’s disappointing that such a well-funded title cut the corner, especially considering the voice acting we do get isn’t particularly great.

Minimal character customisation is something of a let down, especially in the early game, as it feels like you’re running around a bunch of clones. Which is ironic, because New World itself feels like a clone. It takes what MMOs of old did and crafts an experience that veteran players will probably find familiar. Admittedly, New World does a great job with those foundations, but you’re not going to find a whole new experience here. 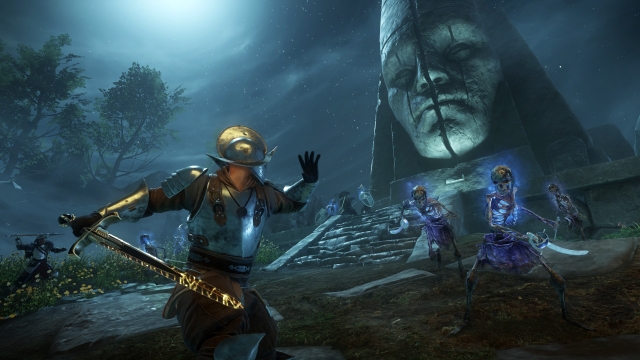 For newer players though, this is likely to be a more accessible MMO than something like World of Warcraft or Final Fantasy XIV. The UI is a lot cleaner, and the simplified hot bar means you won’t be trying to combine 19 different moves spanning five different number pads. Elements like crafting and gathering are integral to the experience, not just little add-ons that get thrown away after a few hours, which means there’s enough variety to keep your visit to New World feeling fresh.

As I continue to play New World, I do find it clawing me in every day, which I suppose is a good sign for the game really. I don’t think it’s the best MMO on the market, especially not compared to the most popular ones. Yet, those games have had years of updates to build a product that players are both enjoying and invested in.

It feels unfair to put New World alongside those games that have had years of content poured into them, because it will obviously pale in comparison. As an MMO during its first launch though? New World is actually a pretty good experience. Amazon Studios has built this MMO as a solid foundation for any potential future content. Right now, New World is a good MMO with the potential to become a great one. For veteran players, it probably won’t scratch the itch your regular games do, but for newcomers to the genre, New World is the perfect place to start.

New World is a great title for new MMO fans to get themselves lost in, but it may be a struggle to entice older fans of the genre to leave the worlds they know.