Nira is a pixelated, top-down "RPG" survival game from Baseline Games, which released in Early Access in 2020 and worked its way to its full release on 14th October 2021 on PC and Nintendo Switch.

There isn’t much story to go off of. A new game starts with a mysterious totem that wakes Nira up (that’s you), says that you’ll have a beautiful friendship with it and then plops you onto a randomly generated world. We’ve seen these sort of set-ups before, and they’re not bad. You have to figure stuff out yourself and with no real end goal, you can make up your own. Maybe work towards creating an aeroplane, making life as comfortable as possible on your island, or fight the biggest monsters the game has to offer. All those goals have something common; they’re not going to be easy.

Mostly because the tutorials suck.

The game controls like a twin-stick shooter, and using the mouse and keyboard feels… weird. It works fine but for some reason it’s imprecise. I’d need to constantly adjust my mouse a little to shovel the blocks I want or swing my sword in the direction I wanted to. There were buttons switching between inventory grids, from your chest to your backpack and hot bar, but that can easily be ignored for using your mouse. However, if you’re holding an axe while going through a chest, you’re still using that item so it’s very likely you’ll smash it. It took me a bit to figure that out! Maybe I’ve been playing too much Minecraft but there are definitely better ways to do your control scheme. 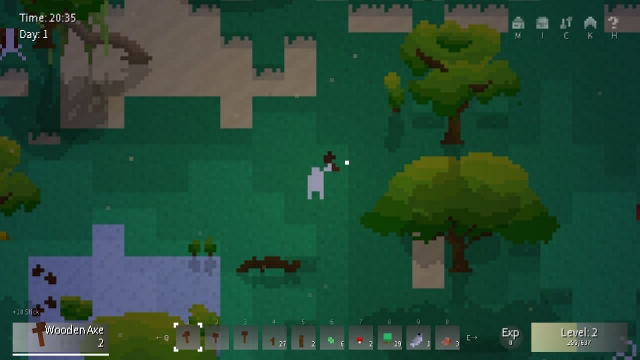 It's you and your totem against the world!

Switching to a gamepad made it apparent why it was so awkward; this game is meant to be played with a controller. It's a lot better, but still a little fiddly to manage. The D-pad is used to access different menus, from crafting to leveling up. However, my instinct to use the D-pad to navigate my inventory caused me to open menus I don’t need such as the tutorial. The fact that there’s a quick way to access the tutorial instead of something more functional says something about the game. However, with all my gripes with the control scheme, I can say that it works after you get used to it. It's just the clunky menus that kill it for me.

Now, onto gameplay. It’s your usual survival game affair; you’ll start out with nothing, and you have to go out and collect resources to craft better items and increase your odds of survival. With enough time, you’ll be able to build aircraft and guns to slaughter the variety of innocent and not-so-innocent creatures in the world. It becomes sort of like a bullet hell depending on the number of monsters you encounter. The game certainly leans towards ranged combat as bows and guns are much more useful than melee weapons. Although I was playing on Easy, the game was still pretty harsh in terms of numbers. Enemies would sometimes spawn in groups and could easily wipe your health if you aren't careful even with armour.

Crafting is as simple as finding what you want in the menu and holding down a button, as long as you have the materials. I wish it was faster but it works. However you’ll need to level up and obtain certain skills in order to craft better items. EXP can be obtained from doing various tasks like mining rocks, killing monsters, or completing quests for the totem. The totem quests are just busy work. It doesn’t really teach the player the basics or encourage certain goals, you just have to find X number of the item it wants, offer them and then the totem moves onto the next quest it gives. There are better totems that give you more advanced quests, but I find no reason to upgrade the totem in the first place other than increasing EXP rewards. And therein lies the problem with the game; the sense of progress. 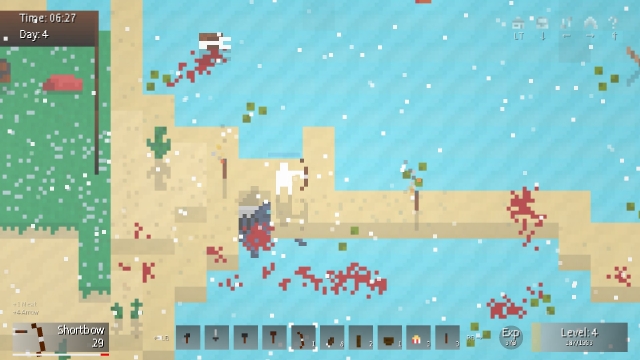 There is a reason why I put "RPG" in quotes at the start because frankly, it barely qualifies for it. Skills are only for crafting, not getting stronger. You can talk to NPCs to trade, or you could shoot them for their stuff - with no perceivable consequences. You don’t even have slots just for equipment. They take up inventory space along with your regular items even when equipped, which is only indicated by coloured brackets.

Moving from wood tools to stone and then metal doesn’t really do anything special. You just obtain materials faster. Unlocking better weapons like katanas and guns let you kill stuff better but a simple shortbow and arrows can do the trick and are easier to craft than bullets. Unlocking recipes to cook will restore more health, but it’s easier just to throw meat and fish into a campfire. There’s nothing in this game that pushes you into taking more risks or getting better equipment other than making the collection of resources faster, and not dying as frequently. There is co-op, but I don’t think it would add much to the experience.

With the above all said however, dying is a serious punishment. You lose all your EXP and items. Going back to where you died, you’re only left with a fraction of your experience and a chest with only the items that were in your hotbar. Again, this was on Easy and although my first death was free, all the others were not so it was a serious setback that just made me want to stop playing.

The art style isn't too bad though. It’s nice, simplistic and well animated. If it weren't for the colours, it could be something you'd see on the Atari 2600. But, this is to its own detriment, as the world itself can be difficult to navigate. There’s very little to differentiate from blocks at higher and lower elevations, and you can find yourself going into holes you can't see. When using the shovel to modify terrain or place blocks, you can barely tell what you're targeting so it's very easy to place blocks in a spot you don't want. I could barely build a straight line of dirt across a small body of water.

At the very least, the game runs fine. I experienced no issues with it. Load times were fast, and I haven’t encountered any glitches. At worst, sharks in the water are able to fit through space much smaller than what you think. 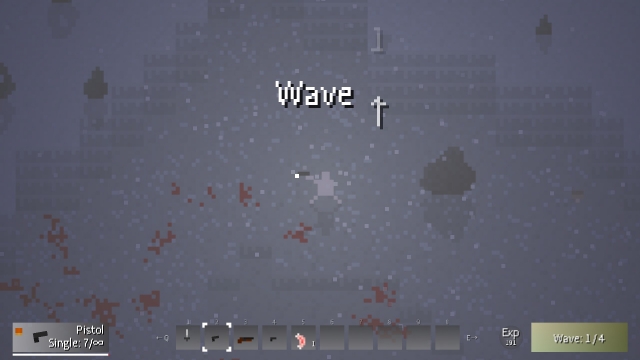 There are portals to fight waves of monsters. They aren’t very engaging.

Nira is a game worth it’s price: cheap. There is nothing special about it, but can at least distract you for a couple hours. However, this game does not exist in a vacuum. There are better games already out that accomplish the same goals but better, that only cost a little more, and will last you longer than Nira by a large margin. Games like Terraria and Don’t Starve are available on the same platforms and are only around £10 on Steam and £25 on Nintendo Switch. And if you already have those, then you're better off saving your money.

Nira is only worth it for its low price - there are already games that do the same thing, but far better.