I used to be a happy person like you, going about my daily life without a care in the world. I had a job, a girlfriend, dreams and aspirations but none of that matters anymore because I’ve met Alazif Exmortis, the last boss of Nitroplus Blasters. A boss that essentially does whatever the fuck it wants, at all times. She can hit you on the ground while you have no input, she can counter you whenever she wishes. Oh and she can also suck you into a big hole and do as much damage as she pleases. Will someone please save me from this hell?

Welcome to Nitroplus Blasters: Heriones Infinite Duel. This will be the only time I address it by it’s full title during my review, as I want to keep the world count below several thousand. Developed by Examu, Nitroplus Blasters involves a whole bunch of different anime properties coming together for a proper rumble. Everyone fights each other for some reason before eventually fighting the mysterious villain at the end- standard fighting game narrative.

Before I started Nitroplus Blasters, I kinda went in expecting the worse; what awaited me was actually a solidly designed fighting game. The characters vary greatly, each one has a different weapon and moveset to go along with it. Alongside this there are also support characters that can be mixed around to create some interesting results. The weapons consist of swords, hammers, guns and just about anything else you can think of. 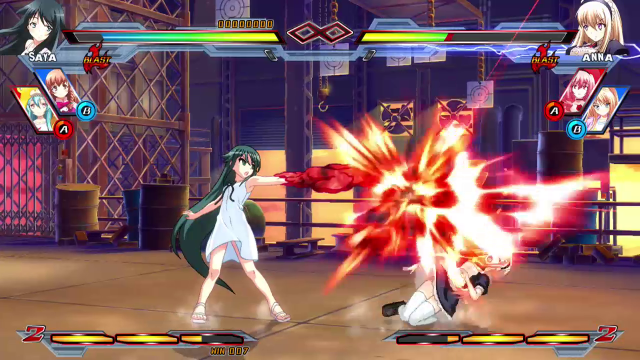 The game controls well and offers players a variety of different moves, all centering around low,mid and high attacks. Parrying and blocking plays a large part of gameplay, especially when you consider the aggressive nature of the AI at times. A special meter builds up throughout the fight that, when filled, will give players the options to attack enemies with a special attack. These are triggered when pressing two buttons together, making them a little easier to pull off than they are in some other fighting games. I prefer this as it makes doing cool attacks a little easier, though hardcore fighting fans may be disappointed by this.

While the characters might be varied, the story is pretty dull. I really couldn’t follow it at all and it just seemed like something that was written in order to excuse why all these characters have been lumped together. You’ll likely find yourself just skipping most of the cutscenes and getting straight into the fighting. For those that do enjoy the narrative there is an extra story mode for players to unlock, that serves as a visual novel rather than adding any actual gameplay.

The difficulty is a little off at times - most of the story mode is incredibly easy and you will likely find yourself breezing through it- but then the last couple of fights are insanely hard. The difficulty curve ends up being outright frustrating, I ended up stuck on the last boss for around 3-4 hours. It’s a boss that can do whatever it wants at all times, I often ended up dying through being stun locked over and over again, the game not giving me any chance to get back up again. It’s genuinely one of the most frustrating experiences I’ve had in recent memory, which is a shame given how enjoyable the rest of the game is. There’s your standard online mode, where you can fight other players around the world, and also a split screen mode if you want subject your loved ones to infuriating losses. There’s not a whole lot of content on offer but it’s not an expensive game, coming in at a budget £30. There’s enough characters in the story mode to keep players going for a while, there’s also some unlockable heroes and a few more available as DLC.

The game looks great, it manages to take a comic book approach to its visuals while making the characters look full of life. Animations are smooth and the special moves often look brilliant. The backgrounds are dull, the developers could have put a little more effort into creating some dynamic levels. At the moment the backgrounds serve as white noise, making sure your gaze is never averted from the action. This is a shame as other fighting game’s create some really memorable 2D environments.

Nitroplus Blasterz is a game that surprised me, I believed it to be another game about females and their jiggly bits, but I was wrong. Instead I got to enjoy a solid fighting game that features a varied cast of heroes, all with their own great movesets. The difficulty can sometimes be infuriating, but it was never enough to make me stop playing. I always wanted to keep going and overcome Alazif Exmortis, the hardest last boss I’ve had to fight in a while. For those who want a cheap solid fighting experience, Nitroplus Blasterz is almost definitely for you.

I went into Nitroplus Blasterz: Heroines Infinite Duel Review quite skeptical at first, but what met me was a solid fighting game. The story is a big naff, but it looks great and plays well. That's all you need from a fighting game right? 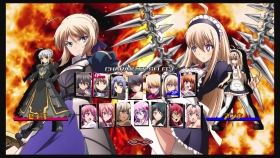