Developer Metronomik’s debut Rhythm action-adventure game No Straight Roads tells the story of “Bunk Bed Junction”, an indie rock duo who feel estranged from a society that generates energy through Electronic Dance Music. After auditioning in the eponymous record label’s talent show, the band gets rejected by all the judge’s present, despite the positive audience interest and a power gauge stating otherwise. So naturally, our protagonists Mayday and Zuke proceed to crash each judge’s gigs in order to liberate the musical metropolis of Vinyl City from EDM’s rule, and dismantle an eluded socio-economic class divide by way of rock ‘n’ roll!

For those who speak only in references: The premise is like if Monsters, Inc. and Scott Pilgrim vs The World merged together. But instead of coalescing the best of each property into one form a lá Dragon Ball Z fusions; it’s more akin to a pitiful Cronenberg disaster hybrid when it comes to narrative execution and thematic substance. That is to say, it’s particularly disappointing how underwhelming the end product is considering how well all the concepts of the game should have dove-tailed neatly.

Not to say that anyone should want every medium of entertainment to be deeply thought provoking or poignant - only that the bare minimum of narrative cohesion should apply, as No Straight Roads seems to dance around the soapbox rather than stay grounded and say anything substantial. 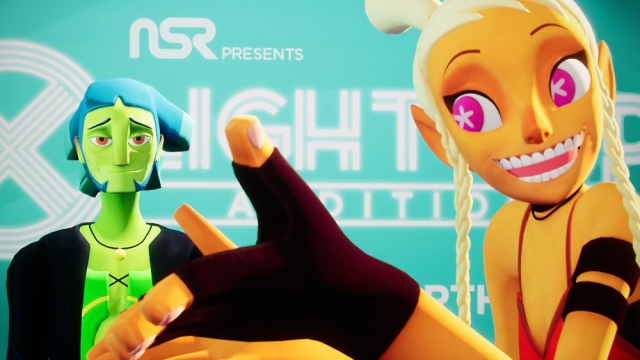 Speaking of which, if you’re easily susceptible to any cringe induced nausea by way of forced catch-phrases, I'd highly recommend cracking a window open and having a glass of cold water at the ready to neutralise its effects.

Our protagonists are your standard double act affair: you’ve got the quiet dead-wood straight-man (Zuke) paired with the loud, quirky and eccentric comic (Mayday); a tried and trusted formula that balances the dynamic between the two quite naturally. However, translating them into the gameplay, Zuke and Mayday were completely interchangeable with hardly any significant differences between the two compared to their visual and personality distinctions.

This is where I must give props to the art department, as No Straight Roads is charged with charisma and energy. Lavishly plastered in bold and vibrant neon, the visuals stir the same youthful futuristic-pop charm I'd expect to see in a Sega Dreamcast title, with a Double Fine flair as seen in such titles such as Psychonauts and Brütal Legend.

Both the fluid 3D animation, and the 2D cartoons present within cut-scenes and vignettes breathe so much life into Vinyl City. There were so many little cute visual gags sprinkled in, one that really tickled me was how the CG-Idol boss wields a trident, and that the prongs were based on the USB symbol! 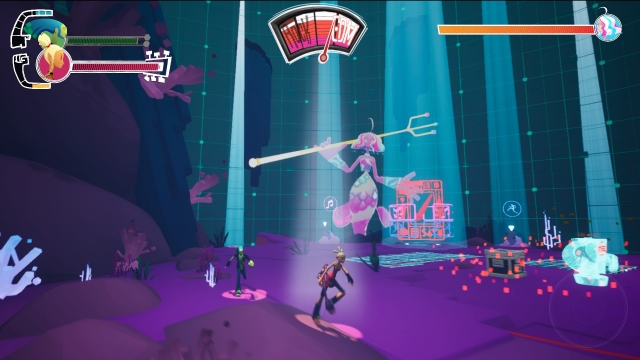 Much like the visual design, the soundtrack and ambient music further elevates the environment and ultimately enhances the gameplay experience more than it should care to. All genres and subgenres (fictional or otherwise) are represented so well and are all tonally in tune with the world it inhabits.

It was pretty funny whenever the duo casually bashed EDM, all the while bopping and grooving to the beat… Well, I was seat-dancing at least! Despite the toe-tappingly infectious score, the band seemed to just sway back and forth with no regard for being in sync. I justified this faux pas by theorising that they are out of sync because they don’t ‘Jive with the vibes of the man’, but this game ain’t that deep.

With all the great things this game had going for it, it leaves me in utter befuddlement why the core gameplay misses the beat like a deaf dad with two left feet. The year is 2020, and there are oh so many rhythm games to take inspiration from. Why the choice to build your rhythm action game on a bare-bones hack and slash play-style is beyond me - especially when said hack and slash gameplay doesn’t flow in sync with rhythmic patterns of everything else in the game.

I hope you are sensing a pattern in this review: there are so many great concepts and potential ideas ruminating in No Straight Roads, that it’s an absolute shame that the majority of those conceptions are barely given the time, attention, or direction needed to flesh them out sufficiently. A prime example of this can be found in the boss fights. Serving as a prominent feature in the game, all the boss battles felt like different shades of the same brand of tedium. You run around a vacant space, smacking whatever you can to progress, all the while waiting in long swaths of nothing until the game decides to continue. Also add the blatant and frustrating cheapshots the game throws at you, freezing Mayday and Zuke in place as you watch your health bar deplete faster than your patience.

This is especially sad considering that the character designs and ideas behind each boss had me excited to see their prospective stages! Going against a k-pop boy band made up of androids, a gimmicky EDM headpiece akin to a Marshmello or Deadmau5, or a child prodigy pianist - there was so much potential to create fantastic boss sequences, only to be restricted by the generic, monotonous gameplay.

On top of all that, the game has the audacity to lock incredibly useful upgrades behind grinding by way of replaying boss battles - which would be fine had the game been fundamentally fun to play.

Each of the five main boss fights are preceded by the biggest waste of time, that being what the game calls an “Approach”: i.e. a long hallway of awkward platforming and repetitively drudge combat segments that splay generously thick before you gaining access to the main boss fight.

There was one section in the lead up to the aforementioned robo boy band battle where I had to jump on top of a limousine that was lane hopping to and fro… Wouldn’t have been a problem had it not been for Mayday and Zuke’s disregard for gravity and physics. Tell me why it was a great idea for the main characters in a rhythm action game to float like they’re on the moon, and I’ll gladly show you a picture of a clueless buffoon (hint: there’s no photo, I’ll just hand them a mirror). 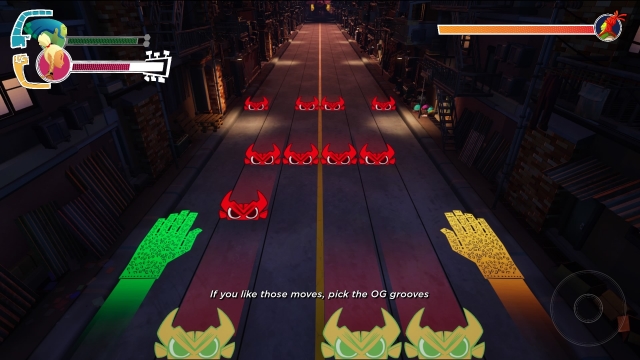 The one encounter I did enjoy was that of Zuke’s Brother, DK West. No gratuitous platforming or clunky combat here! Just a simple yet effective dodging game, with a tidy high-five matching segment at the end of each round. Though these encounters overstayed their welcome, they were by far the best and only good part of the gameplay in No Straight Roads.

The peculiar choices strewn along the game takes what should have been a great game, and turned it into a bland disaster piece. The tone-deaf choice of hack and slash mechanics and floaty controls does not jam well with the precise timing needed in a rhythm reliant game. It instead sapped all the energy and fun from a creatively expressive and vibrant world, serving as yet another cautionary tale of style over substance.

No Straight Roads - Welcome to Vinyl City (Reviewed on PlayStation 4)

No Straight Roads is a videogame first and foremost; and by videogame standards, this was a poor effort for such wasted potential. 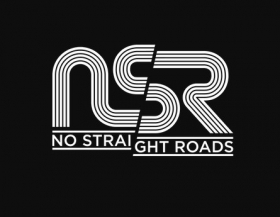