What do you get if you take the gameplay of a match-three game and combine it with the elements of an RPG? The answer is Oafmatch. A turn-based combat game where the goal is to match-three or more gems to power up your companions and attack the enemy.

Now Oafmatch might sound a bit confusing at first but the core gameplay mechanics are fairly straightforward to learn and master. You see, the story follows the journey of Knuckles the Oaf and the many companions he encounters along the way. The goal is to save their homeland which is now fraught with danger and monsters. Each level or rather battle that you deal with is another step forward on the world map and brings you further into the story and the world.

Once you and your party are engaged in combat against all manner of enemies, the match-three gameplay starts and the gameboard is set up. You will find all the lovely gems awaiting your touch to align three or more of them to collect their energy right in the middle of the screen. See in this title the colour of each gem relates to a character and their attacks. Each of the weapons a character can equip and use in combat require a set number of charges in order to be used. By clearing the gems of that colouring and building up your charge you can then unleash a wave of damage on your enemy. This is all done with some stylish visuals and audio that help to give a sense of impact to your actions. It’s the 2D art direction in Oafmatch that really adds to the gameplay keeping up that fun visual style. 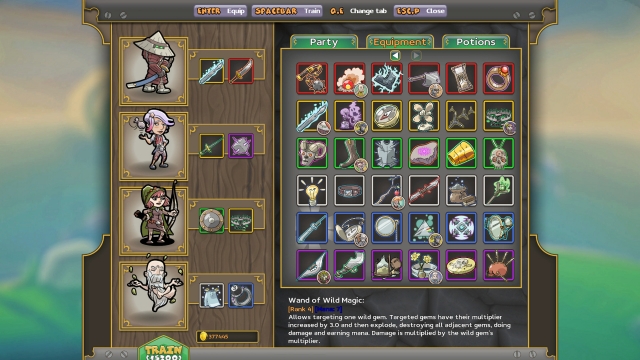 Oafmatch works in turns meaning that both you and the enemy will have plenty of chances to attack each other. Because of this it is good to think ahead when starting an encounter and look for openings to link gems and get chains of them in a few moves. Making sure when to attack is key as well because doing so will end your turn and leave you open to taking damage. To win an encounter you simply need to defeat all of the enemies on screen and likewise, should all of your characters fall you will then lose the encounter. Thankfully though should a character on your team fall you will have the chance to bring them back by matching up their gem on the board. If you're not quick enough though they will be gone until after the battle.

It’s a pretty simple and solid gameplay loop once you get used to it and can lead to some satisfying moments. That said however one of the problems that Oafmatch has is how the enemy turns are handled. You see they play out at a rather high speed meaning it can sometimes be hard to keep track of what they are doing. This also applies to damage as well. One moment your characters are alive and the next they are dead. Honestly there is a lack of feedback in Oafmatch that can put a damper on the experience. It doesn’t make the game unplayable by no means but it can be a bit frustrating.

Where the RPG elements really come into play with Oafmatch is in the character leveling, classes and weapons they can use. The game has thirty characters, each of a different class, that can join your part on this grand adventure. To accompany them are around 60 different weapons each with their own stats and effects in battle. Building a team that is varied in skills and weapons will work to your advantage and improve your chances of success. By spending the gold you earn from encounters you can level up your characters to improve their own stats such as damage output and health which will help as you progress through the story. 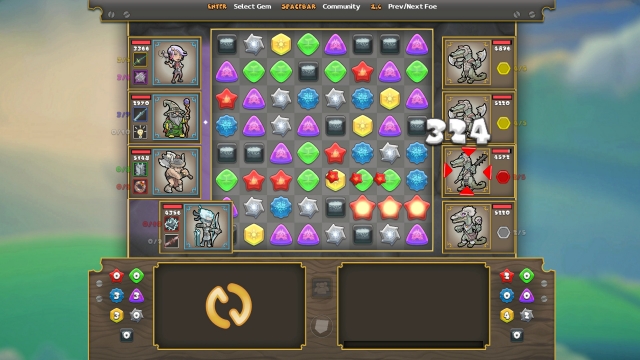 As interesting as the gameplay in Oafmatch is it sadly begins to grow tiring very quickly as the charm of the title fades fast. The story becomes less of an interest as the game continues the repetitive nature of the title will not be to everyone's taste. Though sound and visuals are solid in style and performance it is a shame that the game drags on with no real points to keep engagement beyond the story and new characters. It would of been nice to see more creative in the gameplay and a bit more impact from the RPG elements.

As a whole though Oafmatch is not a bad game it is simply one that could've been so much more had there been a few improves to the games systems to mix up the formula. This along with the lack of real feedback to the player makes this game a hard one to recommend unless you are looking for a match-three game with an interesting spin. Just don’t expect to see this one through to the end.

Oafmatch is not a bad game but it could've been so much more had there been a few improves to the games systems to mix up the formula. Along with the lack of real feedback to the player, Oafmatch is a hard one to recommend. It's a good match-three game just don’t expect to see this one through to the end.