My history with Octahedron goes back to the EGX Expo last year, where I had the chance to play the game and speak to the developer - you can read that here. It was easily my favourite game of the show and one that left a long-lasting impression on me afterwards. Several months later, Octahedron has now released across Steam, PS4 and Xbox One and I’ve been selected to revisit it for a review.

Developed by Demimonde, Octahedron is a music-focused, side-scrolling platformer with an unusual gimmick: players must traverse each level using tiles they can place below the protagonist. It’s a simple gimmick that goes a long way to creating some fun and unique level design. The music, whilst absolutely brilliant, provides a movement tempo for each level, affecting the rate at which enemies and other environmental hazards move.

There is a story behind the platforming, but the two cutscenes in the game don’t give a lot away and they honestly feel a bit out of place alongside the gameplay. The first cutscene depicts a man interacting with an object that turns his head into a octahedron, before he is transported into the neon-landscape of the dimension that we spend the game playing through. It doesn’t add much in the way of motivation and seems to serve as an explanation, even though I feel the game doesn’t particularly need one. 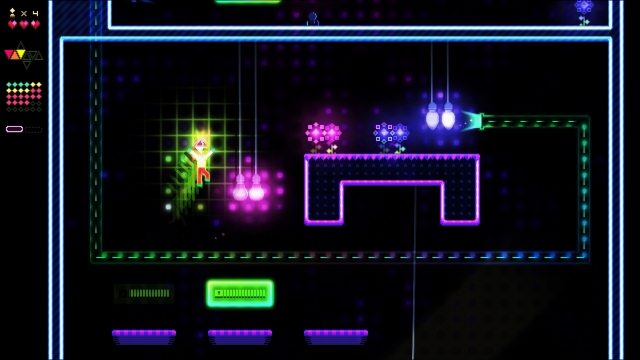 One of the first things I noticed about Octahedron is its neon-infused art style. Imagine the artstyle of Tron, but much more colourful and vibrant. It’s something that instantly sets the title apart from other platformers, while also still managing to fit the aesthetic of the genre. My only complaint is that the artstyle can cause quite a bit of visual-noise in places, making it hard to differentiate the protagonist amongst the hordes of enemies.

The game’s soundtrack - a total of 32 tracks - features a number of artists adding their talents to the title. Lead Developer and sound designer by trade, Monomirror, heads up the bulk of music, but there are also tracks from the likes of Chipzel, Andre Sobota and Derek Howell. The soundtrack plays a large role in the pacing of each level, with higher tempo tracks providing a great level of challenge due to the faster movement of enemies.

The ability to build platforms is expanded on by the introduction of a platform that enables the protagonist to shoot downwards. It’s similar in concept to Downwell, as players are forced to think carefully about the placement of their platform as they balance progression and aggression. This is something the game explores in the later levels by limiting the number of platforms players can create in one chain, adding an element of reactionary demand on top the the progression versus aggression system. It’s just one of the many ways that Monomirror implements some excellent design ideas in a way that both challenges the player and remains fun.

There are some later levels that do tend to sway away fun and into frustrating as the game’s demand on player skill and reaction increases tenfold. This is made worse by the aforementioned visual noise, which only acts to increase potential frustration during a difficult level.

At around 50 or so levels, there is plenty for players to get stuck into here, but I can’t help but feel the offering would be greatly improved with the addition of a level creation system. The verticality of the gameplay mixed with the platforming system lends itself incredibly well to some form of community creation. Hopefully, Octahedron is eventually updated to include Steam Workshop capability as it would really extend the long-term appeal of the game.

Octahedron is a clever spin on the classic platforming genre that introduces the ‘place your platform’ approach to level progression. Intelligent puzzle design, striking visuals and a soundtrack straight out of late 90s raves make for one of the most interesting titles I’ve experienced so far this year, even if it is occasionally marred by difficult and frustrating puzzle design.

Intelligent puzzle design, striking visuals and a soundtrack straight out of late 90s raves make for one of the most interesting titles I’ve experienced so far this year, even if it is occasionally marred by difficult and frustrating puzzle design.