My first memory of Oddworld: Abe’s Oddysee was watching my older brother playing the first few levels while I was cowering behind my pillow, scared of everything that moved until he made Abe fart and laugh to cheer me up.

Oddworld revolves around our unlikely protagonist Abe. Abe is a slave working for a big shot meat factory called RuptureFarms. The Mudokon believes he has a good job and is content with his prisoner life. One day when Abe is carrying out this duties by waxing the floors he overhears the main antagonist Magog Cartel in a meeting with other businessmen about sales dropping due to animals they’re turning into profitable snacks becoming extinct. They then come to a decision that the slave Mudokon’s (Abe’s species) are next for their moneymaking slaughter scheme.Realising that Abe was listening, Magog Cartel’s sets his henchmen after poor defenceless Abe.

5 year old me wouldn't be best pleased if she knew that I own the remake of Abe’s Oddysee, known as Oddworld: New ‘n’ Tasty for the PlayStation 4. But from hearing such good things about the Oddworld series; I was quite keen to try this out! A lot of Oddworld fans hiss at the word “remake”. It’s no remake as far as they’re concerned. Oddworld: New ‘n’ Tasty is seen as a remaster or a re-imagining, much like the Resident Evil Gamecube remake; so from here on I’ll be calling it a “remaster”.

Now I’ve tried to replay the original not too long ago. And seen parts of playthroughs, so I only know the first few stages of the original, but otherwise I know nothing about the story or the ending. But this game - this is how HD remakes (or should I say remasters) should be done. Oddworld: New ‘n’ Tasty has been built from the ground up. The opening is everything I remember from dialogue, cutscenes and the first few levels but remade. Not just set at a higher contrast like most HD remasters seem to be doing these days, but literally started from scratch. And wow this game looks amazing on my PlayStation. I didn't get to fully appreciate how beautiful this game is until I left the meat factory on level 1. It really is worth getting on the PlayStation 4. 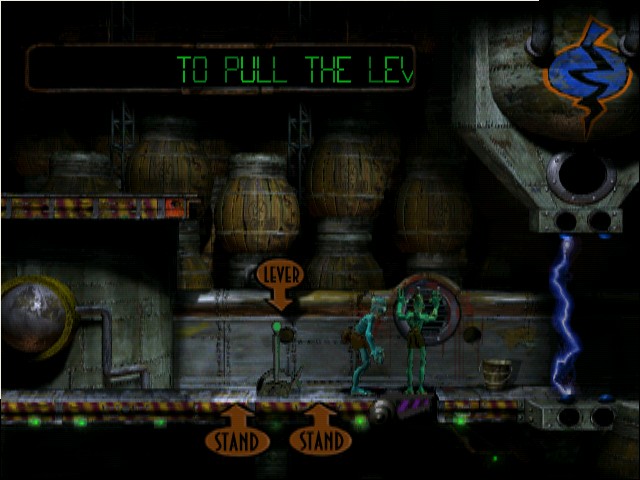 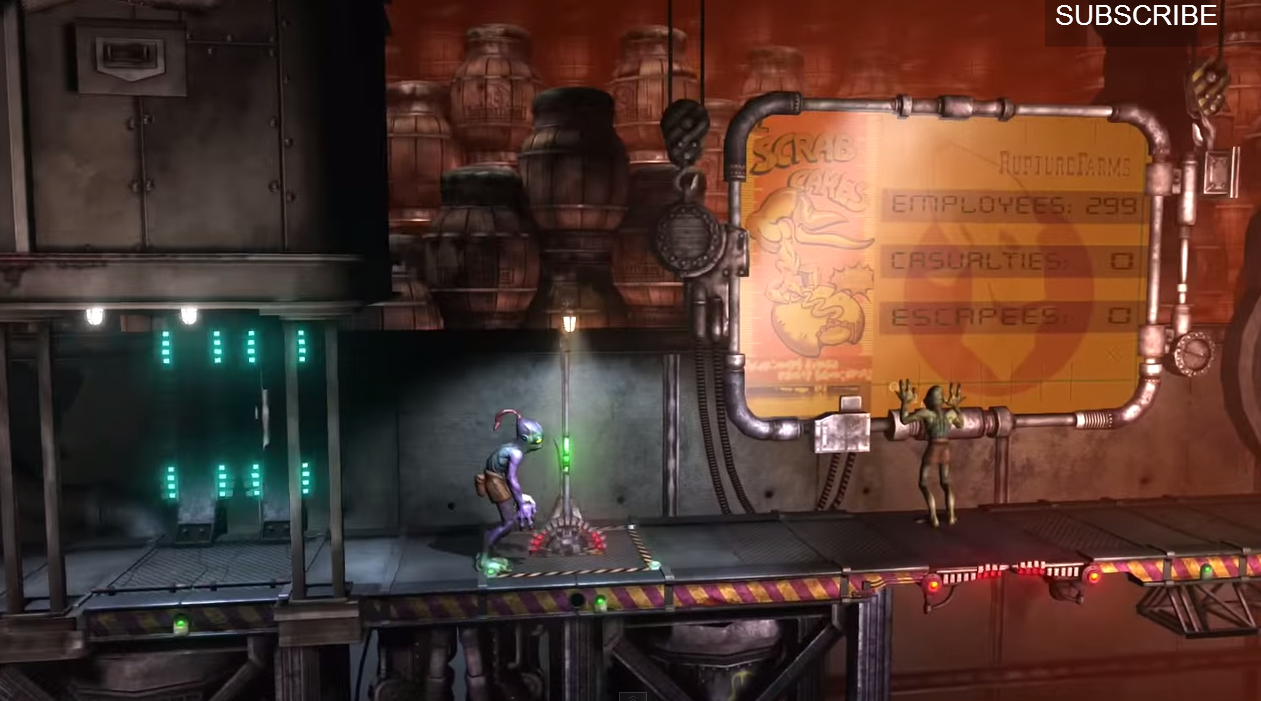 Most levels aren't exactly the same to a T but similar enough you find it familiar and nostalgic.

The game objective is simple in the first few levels: help Abe escape RuptureFarms and possibly free your Mudokon people from slavery (it’s optional to save them). You are put in front of variety of puzzles to solve and obstacles to cross in a side scroller view. Although this type of view in a game is seemingly old fashioned, it doesn't limit the game in any way for the PlayStation 4. Oddworld: New ‘n’ Tasty makes it seem like every new-gen game should be a side scroller.

After doing some research I’ve found out the controls for Oddworld: New ‘n’ Tasty have been changed compared to the original. Movement is solely on the left analogue stick and the D-Pad now has Abe’s commands. Making this much easier to control Abe and less confusing to remember the commands for puzzles. Theres also a new feature of throwing an unlimited supply of bottlecaps (with the right analog to aim and R1 to throw) for which the only use I’ve found is killing pesky bats. Although once you’ve found some bombs for Abe to throw it’s much more fun watching enemies explode quite graphically.

My first half hour playing this game I found it quite frustrating. Every time I died during a puzzle I would have to start the level all over again. I thought the birds flying in a ring were the save points, and often I was stumped on what to do. THEN I realised from watching a stream I could “Quiksave” and “Quikload” and these were so handy! I can Quiksave by tapping the touchpad on my PlayStation 4 controller just before I take a risky move in a puzzle, and if I fail (which most of the time I do) I can hold the touchpad and I’m right back to where I Quiksaved. This feature wasn’t in the original Oddworld game but was later introduced into the second instalment Abe's Exoddus. The only downside is since I have a memory like a sieve sometimes I’d hold the touchpad instead of tapping it and vise versa. Resulting in me having to do the puzzle all over again.Another thing I figured out was making Abe chant with L1 and R1 means I could make portals from the birds I thought were save points to teleport other Mudokon prisoners. To where? Safety I assume. Chanting also gives Abe the ability to possess enemies to make them do his dirty work, this can vary from shooting other enemies, running into mines or just holding L1 and R1 again to make the possessed enemy explode. Awesome stuff.  I don’t know If I missed these memos during the tutorials at the start or maybe I’m just meant to know this off the bat but after learning these few things the puzzles were much easier.

Ah. It tells you how to control enemies and make portal’s two stages later. Which is odd (excuse the pun) since a lot of puzzles I came across I felt I had to use the chanting possession technique to get any further. That also means I wouldn’t have been able to save any other slave Mudokons in the meat factory because I wasn’t shown. Is it sort of a beginner’s trap or punishment for not knowing the original enough? I’m just glad I found out early and don’t have to backtrack to save the Mudokon slaves. 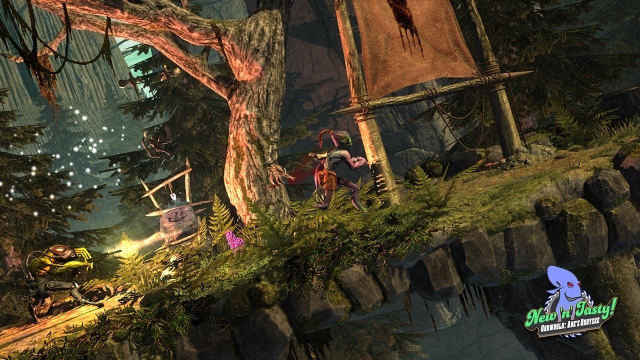 I’m really liking the way these stages are laid out, and the way it takes you to the next puzzle straight away without loading or blacking out. It’s just one smooth camera pan to the next level. In the jungle stage “Paramonia” almost everything you see in the background is an area you will soon explore or have already encountered. Although this was something Oddworld was known for it’s still impressive and we don’t see enough of these cool transitions.

I find this game hugely imaginative when it comes to creating puzzles. The diversity with each stage is impressive. I never felt like I was playing the same level and each obstacle felt new to me.

When it comes to the story, Oddworld: New ‘n’ Tasty seems to carry the same tone as the original and nothing’s really changed apart from some new endings. Oddworld seems to be about pollution and killing off animals for food. In a sense Abe is just a lamb that escaped the slaughter house and Magog Cartel and his minions trying to harm him are humans making profit. Sort of depressing when you have a think about it. Of course that’s just my (and other fans) interpretation of this whole story.I won’t reveal too much with the story’s climax but regardless of what ending you get (which is determined by how many Mudokons you save) they’re all pretty humorous and are fair to how you played throughout the game.I honestly didn’t know if I was going to enjoy Oddworld: New ‘n’ Tasty considering I had such bad memories of it as a kid. But I highly recommend it for anyone who had a chance to play it when it came out 17 years ago. Even if you didn’t think much of it back then, its still worth a look. For newcomers to the series I’d at least borrow it from a friend or look at playthroughs. It may not be everyone’s cup of tea, but overall this remaster has set a good example on how remakes should be done!

Highly recommended for anyone who had a chance to play it when it came out 17 years ago. Even if you didn't think much of it back then, its still worth a look. For newcomers to the series should at least borrow it from a friend or look at playthroughs. It may not be everyone’s cup of tea, but overall this remaster has set a good example on how remakes should be done!

A twenty-something year old forever cursed with the face of a fifteen year old. Always content with a cuppa in hand.

19 Years on, Abe Finally Makes it to Nintendo Home Consoles 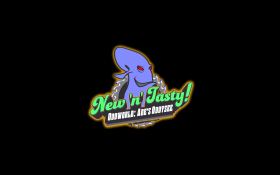