Of Orcs and Men Review

Of Orcs And Men turns our perceptions of the fantasy genre on it's head and puts the Orc in the limelight, as Bloodjaw warrior Arkail and his Goblin compatriot Styx set out to bring down the Empire of Men and end the slavery of the greenskin people. Humans are very much the bad guys in this latest RPG from Cyanide Studios, depicted as they are (for the most part) as brutal slavers and ruthless expansionists.

Arkail, one of the last free Orcs, is one of several warriors of his tribe sent out on a mission to assassinate the Emperor with the help of his smaller, but no less green, friend and guide. Both characters are directly controllable and the player can switch between at any time, while the computer AI will take care of whomever is left at the wayside.

Basic gameplay will be familiar to anyone who has played such games as KOTOR or Dragon Age: Origins. Both protagonists have a number of attack types and special abilities available for use in combat; targets are selected and up to four moves are placed in an action queue for each of the two combatants and then play out in order. At any point the action can be slowed to a crawl at the touch of a button so tactics can be changed on the fly with minimum difficulty and disruption. 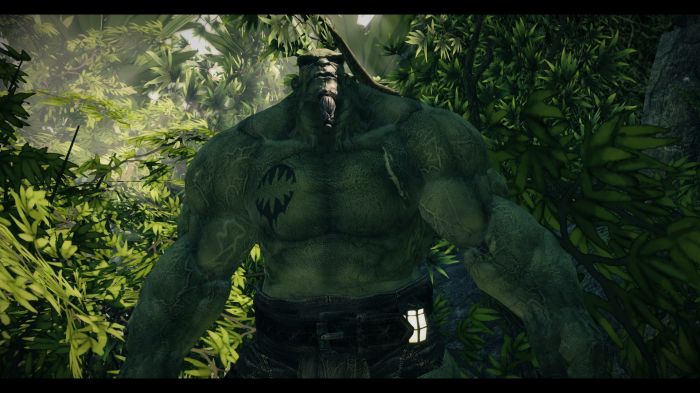 The strategic depth in the combat system really stands out and carefully considered tactics are necessary to succeed. Arkail is very much the powerhouse and his abilities are focused on both causing and absorbing large amounts of damage and using brute force to succeed. Arkail, by comparison, is a less durable combatant with emphasis on ranged attacks and supporting his Orc companion by status-inflicting abilities that stagger, stun and damage the armour of his enemies.

Using debuffs and varying attack types is necessary as certain enemies will be resistant to many of the standard attacks available, so during combat it is important to keep an eye on how effective your strategy is proving against each of your opponents and move to adapt accordingly. Micro-management is a necessity as although both 'heros' will act without direction they will only make use of the most basic moves in their respective repertoires without intervention.

Arkail is prone to attacks of rage in which he causes extreme amounts of damage but becomes uncontrollable. While he is an extremely efficient killing machine in this state, should foes be left standing when his rage subsides he will be exhausted and unable to fight back. It is important to manage his anger levels, which raise when takes damage or uses offensive abilities and can be slowed or reduced by using a more defensive approach. Going berserk too early will lead to failure, but if timed right his relentless assault can snatch victory from the jaws of defeat. In stark contrast to Arkail's status as an uncontrollable rage machine, Styx is a calm, collected, stealth machine. Outside of combat he can enter a special stealth mode in which he is near invisible to enemies unless they get too close. By sneaking up on unaware hostiles he can execute an instant kill knife attack, which is useful for taking out stragglers, thinning out groups or even just getting a preemptive strike by eliminating the most powerful enemy in the area as a combat opener. When large groups are beyond even Arkail's formidable abilities, it falls to Styx to whittle down the opposition to a more manageable number.

Advancing through the levels gives you the ability to increase one of four base stats that alter exactly how each greenskin performs in combat and also allows the purchasing and development of specific combat skills. The first point placed into an ability unlocks it for use and each is ability is specialised, so one may be of use against agile enemies who dodge while another may be effective against breaking parries.

Investing a second skill point in an ability gives the opportunity to specialise the skill further down one of two separate paths, so the player has to weigh up which option is best for their play style. For example, a player may have to consider whether it is worth upgrading an attack move to stagger an opponent when connecting or if a more direct increase in damage will be more effective. Choice is final and once upgraded the other path is forever closed.

Story missions can be broken up by side missions, but the majority of both mission types take place on incredibly linear enclosed maps. Each section is essentially a corridor filled with enemies and any side paths revealed by the map will inevitably lead to a dead end, usually with either a treasure chest or a couple of enemies sitting waiting for you. It's very predictable stuff and it's a shame that there is nothing in the way of exploration. Speaking of treasure chests, there is also a disappointing lack of loot throughout the game. You will be lucky to come away with one new item from each mission so it takes some time to complete an armour set and when you do find a new piece you will find that the difference between your current setup and your newly acquired gear will be minor to the point it's not worth swapping. You can upgrade gear by dropping some coin (or 'trade tokens') which will give it a slight improvement, but it's a very basic system.

Despite these issues the enjoyable and tactical combat system does shine through and an interesting story with likeable characters is likely to hold your interest and keep you invested in the journey. Arkail and Styx are an interesting pair; the banter between them is entertaining and they both have interesting backgrounds as well as a moral greyness that sets them apart from the usual 'gallant hero' stereotype. While the Empire is most definitely an evil force in the world the two freedom fighters are not exactly good guys, resorting to brutal terror tactics and acts of cruelty where they feel the situation calls for it.

Irrespective of their involvement in these repugnant acts players will find themselves warming towards the plucky pair, who are undoubtedly the lesser of two evils in this bleak and uncompromising world. Voice acting for the duo is very well done and their dialogue is witty and intelligent for the most part, although there is an unfortunate tendency to shoe-in a sackful of swearing at every available opportunity. It smacks of an attempt to make the content seem more 'mature', which comes across as unnecessary as the themes and content within the story do this so much more effectively. 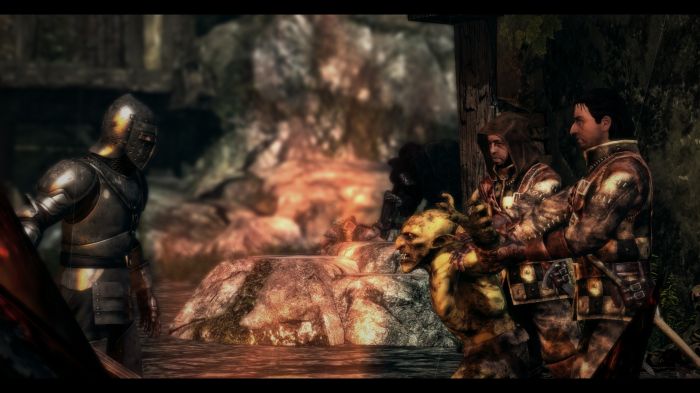 There is some rough around the edges in Of Orcs And Men and things would be greatly improved if the environments were a bit more open with a bit more to collect, but its challenging and tactical combat ticks a lot of boxes and provides a lot of gameplay. This, coupled with three-dimensional protagonists and an interesting fantasy setting should keep players invested in the journey of Arkail and Styx from start to finish.

Of Orcs and Men (Reviewed on Windows)

Of Orcs And Men turns our perceptions of the fantasy genre on it's head and puts the Orc in the limelight, as Bloodjaw warrior Arkail and his Goblin compatriot Styx set out to bring down the Empire of Men and end the slavery of the greenskin people.

It's an interesting concept :) - I'll probably wait till it comes down in price in a Steam sale and pick it up.

wow, that is REALLY cheap, been keeping an eye on this game since you reviewed it, might pick this up

Of Orcs and Men