The harpoon is an underutilised weapon that you don't usually use in videogames. Olija doesn't just go for the usual sword, bow, or musket, the game gives you all those and a magical harpoon with warp powers to wield. You play as Captain Faraday whose land has fallen into tough times, so he decides to go search for other places for his clan to live that could be more prosperous. While sailing, the shipping vessel is attacked by a whale leaving all of the crew unaccounted for while you are stranded on the island Oaktide. You will be exploring the country of Terraphage and its islands to find out if any of your missing crew survived. 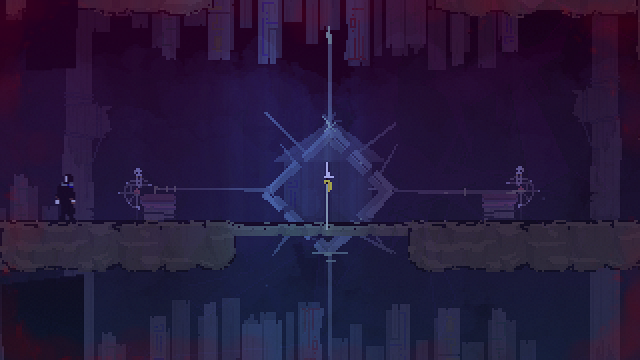 Olija was created by Skeleton Crew Studio, the name is quite fitting considering the main team is made up of one person. Thomas Olsson. It’s hard to believe that only one person created all the graphics, sound and story all on his own. Especially considering how good this game is, you would think a bunch of people worked together on it. The minimalist graphics look great especially having the animated background and foreground in front of you. This action adventure game may remind you of titles like Secret of Monkey Island, another swashbuckling title that came out in the early ‘90s. Though instead of a point and click adventure, Olija is more of a platformer slashing type game. Once you find the harpoon weapon, the game turns into more of a puzzle game. Using the harpoon gives you the ability to warp to its location. If you throw the harpoon across the screen, once it attaches to an object or enemy you can warp to where it is attached. This makes it easy to spear and attack enemies, get up to high spots you can’t jump to, and get across huge gaps in the floor. It really makes traversing the levels a lot easier. 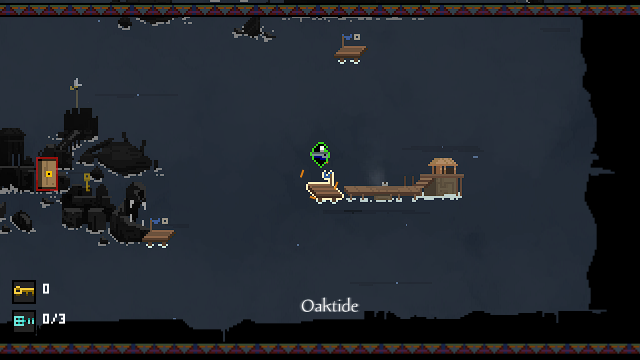 When you first start your journey, you will have a limited amount of places that Fairday can sail to and explore. The island of Oaktide serves as his base, so any of the crewmates you rescue will be waiting for you there. Your crew consists of ten members, so you will have to travel all around the islands in Terraphage to rescue them from their cages. There will be other people you will save that will aid you on your journey, one being a hat maker. He will create a variety of hats that will give your magical harpoon special abilities like stealing vitality from the enemy, giving you the power to spin your harpoon like a blade, and a straw that lets you use electric power. Be careful with this one, be sure to not try using electric power while standing in water, or you will be in for a bad time. These hats are not totally free mind you; they require certain items to create. So some of them won’t be obtainable until later in the game when you have access to the items required. My personal favourite was the harpoon spinning hat, it would inflict a lot of damage to your enemy. 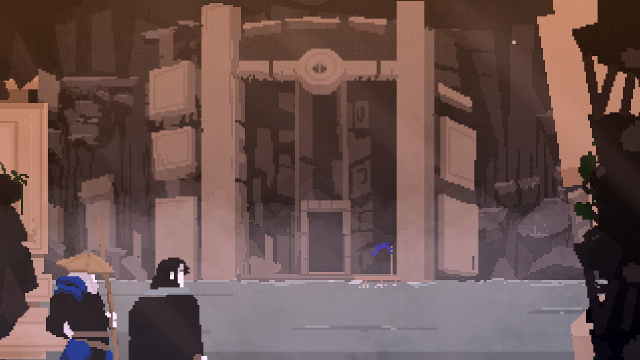 In Olija to access the different islands, you will need to find pieces of a map. They will be in areas that you explore and once you find it you can show it to your personal boat captain who sails you around, which will open up a new area for you to explore. When you find a piece of map this is a good indication to let you know what area you will head to next, but the game definitely does not hand hold you and tell you what to do. It will take a lot of exploration and searching to find the keys that are required to get into certain areas, and trial and error to solve all the puzzles. Be sure to keep in mind that you can use your warp ability as some areas will require you to put your harpoon down, hit a switch, and warp through a wall to get through. I kept forgetting that you can use that ability to go through walls that normally you would be stuck behind, so I wasted a lot of time. 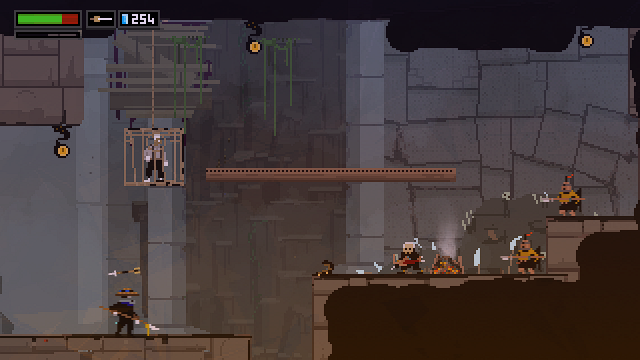 Olija is not an overly long game, especially if you figure out the puzzles faster than I did. But the story is quite good and I really enjoyed the narrator that would tell your story. The voices of the characters are interesting, they sound a lot like Andre the Giant’s character in The Princess Bride movie. Control wise using a controller worked great and switching your secondary weapons is really easy to do quickly, and dashing to avoid enemy attacks works well. I’m trying not to spoil anything in the game, but you know a bad guy is really bad with the name Rottenwood. This game really is a must-play and I was sorry to get to the ending and be done. I’ll just have to try again and see if I can get a better time than 14 hours, since I should be a lot better at using my harpoon. 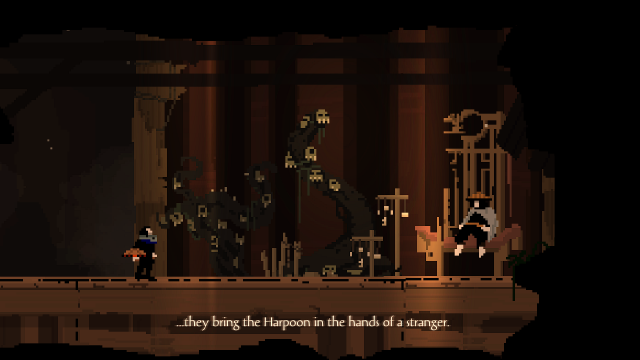 Olija is a fun and engrossing action-adventure game that has you fighting foes and solving puzzles with a magical harpoon. A little on the short side, but a fun experience that leaves you wanting more