I’m not going to lie, I first learnt about the third-person hack-and-slash Onee Chanbara games thanks to the DLC available for OneChanbara Z2: Chaos. Specifically the alternative outfit Strawberry Banana Surprise, which consists of two nipple-sized strawberries and a banana. Being games with zombies, I’d ignored them before then because I don’t like zombies. With the franchise now on my radar, I paid attention when Onee Chanbara Origin was announced, especially since I like playing game series’ from the start of them, and Origin was stated to be a remake of the first two titles. Yes, also anime breasts.

The two games were originally released in Japan as part of the budget line of PlayStation 2 games “Simple 2000 Series”, and released in the West as Zombie Hunters in the early 2000s. Onee Chanbara Origin is the sixth game released in the West, but twelfth in Japan, and it came out in October 2020. I delayed my review because the game was literally broken upon release, and it took Tamsoft a while to release patches. To get it working originally, I had to go into the Nvidia Profile Inspector and limit the frame rate to get it to load, which was less than ideal. Having given them plenty of time to fix things (there have been four patches and 96 items of DLC), I decided to finally review the game. 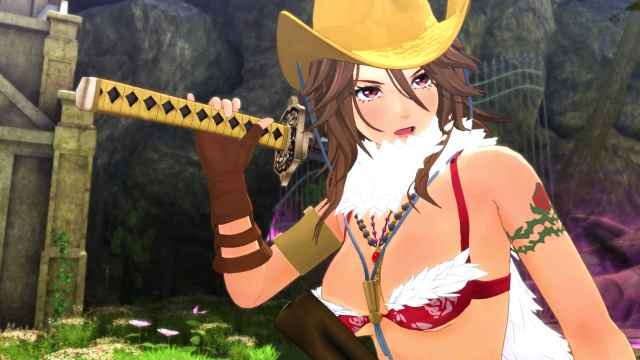 You play as Aya, a hunter on a quest to find her sister and father. Tokyo has been overrun by the undead and other monsters, and Aya only has her swords, a cowboy hat, and a red bikini. Oh, and when she’s covered in blood she goes into a blood frenzy, increasing her attack power. Keep getting covered in blood, and she transforms into her Xtatic form, which makes her health drop every second that she isn’t doing damage to an enemy. The Xtatic form also changes her hair colour, and gives her horns, claws and a thong. It’s because she’s from a line of people with Baneful Blood, who commonly go insane unless they murder their siblings!

You start Onee Chanbara Origin with one long sword, but Aya soon gets two shorter ones. You can switch between them during combat, and will need to at points. See, as well as Aya gaining power by being covered in blood, her weapons lose power when covered in blood. So, you have to shake it off regularly - or at least when the meter in the bottom left tells you to. However, this takes a precious second to do so, interrupting any combos you’re in the middle of, so switching weapons can be preferable. 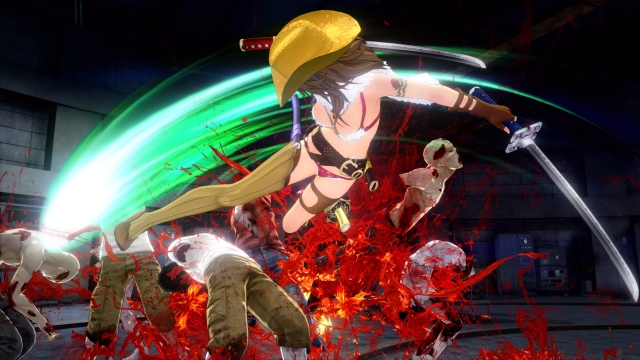 Combat is your general hack-and-slash mob-killing, with the occasional boss or mini-boss segment. I had some trouble hitting the special move that you can do when a weaker enemy is staggered, but other than that it was fairly easy to do. Parrying, however, I had a big problem with, even with enemies flashing just before they attacked. Worse, if you mistime a parry it leaves you open to a follow-up attack for a good couple of seconds, unable to move. Time it well, however, and the enemy will be staggered, allowing you to take them apart. Often literally - you’re fighting zombies, after all, and their limbs start to come off pretty easily.

You can also use items, which you buy using your smartphone, such as Cure Gems to heal yourself, and Power Gems to increase your attack power. There are also rings to buy and equip, but they are really expensive, and I’m sure that you can’t buy them all by just playing the game through once. You unlock more items by doing things like getting 300 hit combos, or finishing missions without taking damage. These “Quests” will also unlock music and artwork, so there is a lot of replay value. 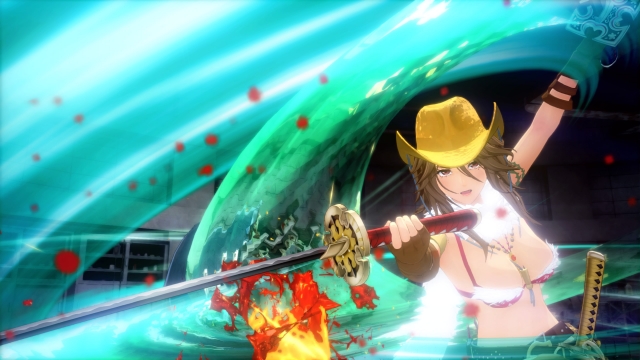 The phone also lets you enter Photo Mode, but that has no features. It pauses the game without a HUD, allowing you to turn the camera, and hit your screenshot key. You can’t zoom in or out, there are no filters, the logo of the game rotates in and out, so if you want a shot without the logo you have to wait…

The first Onee Chanbara took me about three hours to complete, but it segued seamlessly into the second game. I only realised that it might not still be the first game because Aya started wearing patterned, wired, lingerie, instead of the original furred bikini that seemed to offer hardly any support. Also, the second playable character who you unlock was no longer wearing a school uniform. Turns out that post-zombie-apocalypses don’t require teenagers to still attend school! However, she was still wearing a short skirt, and was 16 years old… 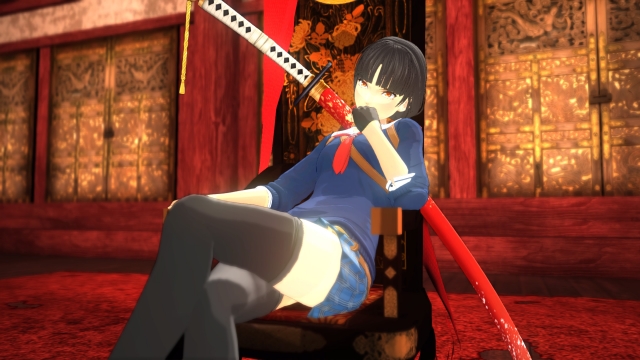 Unfortunately, the second game was also about three hours long. Sure, it didn’t feel quite that fast as you’re wading through monster dogs and syringe-throwing nurses, but it is. I kept being surprised by getting a V-rank (apparently better than S-rank?) for completing a level in five or six minutes. Don’t feel bad about the short play time of each mission, though, as there are 10 DLC missions you can get for a total of £7.90. There is also about 30 alternative background music that you can download, meaning that there are about 50 DLC costumes! Yes, that is quite a bit of money on top of a £46.49 game that doesn’t work properly.

Even after multiple patches, there are still game breaking issues with Onee Chanbara Origin. I wish there weren’t, as it’s a fun (if expensive) game! Some people have reported that their progress is deleted the moment they reach Chapter 3, iffy frame rates, mouse cursors on-screen, crashes… Weirdly, when you use the controller to quit the game, it comes up with a dialogue box that you need to click on with your mouse. 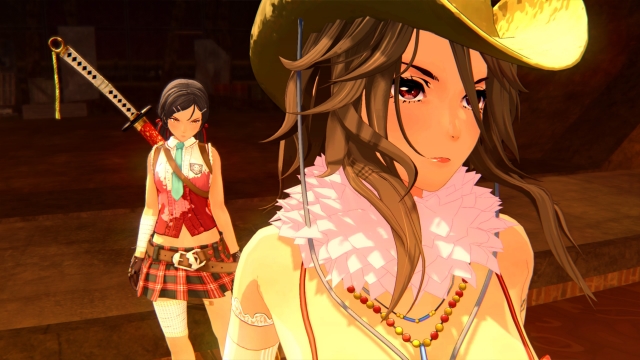 There’s also no lip synching, and the character Lei is pronounced Rei in the dub. I have no issues with the voice acting, it’s all very well done, but following along the subtitles isn’t easy.

That said, there are some nice touches both in and out of the game. Enemy designs are really interesting, the bosses are horrifying creatures, and the cutscenes have jiggle physics. The music suits the game well, though I wouldn’t say it’s memorable.

Out of the game, the icons for the Steam achievements join up to show the protagonists. Of course, unlocking them out of sequence doesn’t help your jigsaw, but it’s a nice touch. 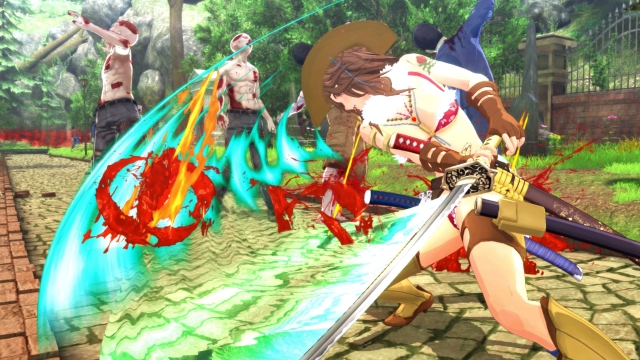 Onee Chanbara Origin is a difficult game to score. It’s fun, but it’s short and expensive. It has lots of replay value, if you can get it to work. It looks great, but is very objectifying even for a game about a woman in a bikini. I didn’t even mention the 16-year-old in a skirt’s moveset includes suplexing zombies… Having not played the other games in the franchise, I can’t say whether Origin is better than those or not. I’m guessing the console ones work without fiddling with files at least…

Barring a major update, there’s a chance that Onee Chanbara Origin won’t work on your system without some fiddling about with a Steam community guide. That said, if you’re a fan of the series, or of hack-and-slash games with gratuitous fanservice, then maybe pick it up on PlayStation 4 where it’s cheaper.

While there’s a chance you can’t play it without fiddling with things, there’s a fun game in here. It’s expensive, with far too much DLC, but it’s fun.