Our World Is Ended Review

Players unfamiliar with the publisher PQube, and their penchant for localising ‘ecchi’ style games, may be surprised, and perhaps put off, by the overtly sexual nature of the game. The games PQube tend to bring to the west are not picked on a whim, however, and often these games have something that sets them apart from a veritable sea of similar titles; be it fun gameplay, or an engaging and interesting story. Our World Is Ended attempts to deliver on its story and visuals, but gets bogged down by countless jokes made in poor taste and comments about the female coworkers breasts.

The story starts with the protagonist, Reiji Misaki being revived from unconsciousness due to heat stroke during his part time job; testing a prototype augmented reality helmet for a games company. Out in public and accompanied by a female coworker and friend, Yuno, Reiji is subjected to every and any embarrassing task the company's president can think of. This abuse culminating in testing voice commands for the helmet that sound like they were ripped right from a hentai game, and a demonstration of the AR helmets R15 mode, which replaces surfaces of the real world with pictures of semi naked women. 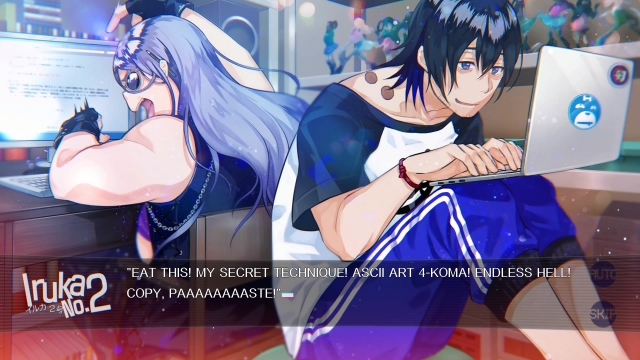 When offered the chance to see his coworker through a special ‘bikini mode’ filter, Reiji decides to fight through the embarrassing treatment. It’s at this point the story shows a glimpse of a darker nature, as a malfunction leaves the hero's helmet with a feed of his current surroundings of Asakusa, destroyed, and his coworkers strung up crucifixion style. All this taking part before the opening cutscene plays. What follows is a visual novel that, despite having an intriguing plot, narrows its audience appeal by laying on the lewdness rather thick. As expected of PQube the game is a minefield of fanservice, tentacles included, and unless the player is comfortable with the nature of this and its themes it can be hard to enjoy the plot.

The story revolves around the developers Judgment 7; an eclectic group of individuals with varying talents that lend themselves to game production. When the augmented reality program they have made seems to glitch out, the team find themselves trapped in the world between virtual and reality, with creatures and characters from their previous games seemingly brought to life around them. If left unchecked, monsters and game glitches have an effect on the real world, with potentially devastating results. It’s up to the team to stop their creations, often in bizarre ways that shows off the perverted mind of the company’s lead programmer. 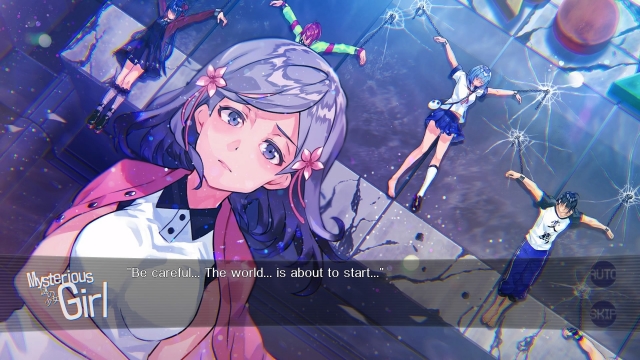 The main cast, while lively and very different from each other, suffer terribly by being reduced to simple tropes. Each member of the team is uniquely and beautifully designed, but their stories and personalities are so by-the-numbers it’s disappointing. Each characters story and growth within the narrative can be easily foretold, as it has been seen a thousand times before, with little-to-no deviation from the accepted norm for their particular personalities. No direct spoilers will be written here, but anyone who has seen an anime or played a JRPG would find the cast familiar, and be able to guess the path each person takes within the game with startling accuracy, they’re that predictable. 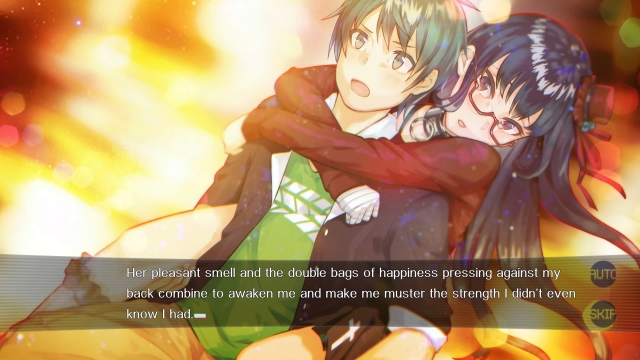 Our World Has Ended tries to stand out from other visual novels in a few ways, for example, Selection Of Soul is a games system of responding to certain questions when the main character is flustered. Instead of being presented a selection of responses to choose from, the possible answers scroll across the screen, several at a time. This means that, not only do you have to hastily read what’s presented, but once something has scrolled past it’s gone, forcing you to choose quickly. This also leaves the options left unread as an issue, for fear of missing out on a possible response. Fortunately there is a way to ‘rewind’ the game to a point before the choice is made, allowing you to go down a different path. It may be that the player is expected to react on instinct and pick the answer they feel is appropriate without much thought, but if that is the case, this makes the idea to include the ability to redo your selection a bit strange. It’s a gameplay element that sounds good in theory, forcing a player to make a decision based on instinct, but falls a bit flat in practice. 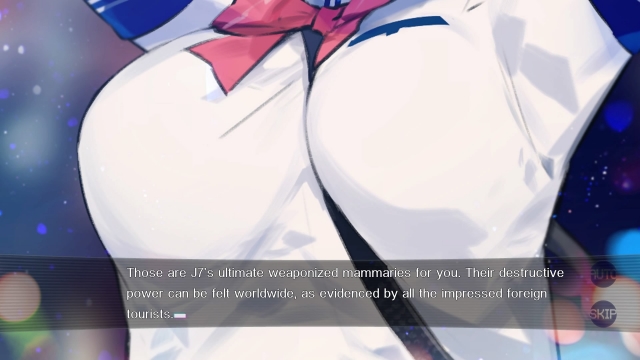 Another way the game tries to distinguish itself is through the music, with each character having their own style and themes that reflect their personalities. As such the music switches depending on who is the focus of the conversation, meaning the music changes far too frequently. While the soundtrack is large and varied, the tracks are often incredibly short; around a minute long loops in some cases. The repetitive nature of such short tracks can often be annoying, and the almost constant flit between character themes can be jarring, especially during extended play. The Japanese audio is a nice touch, the voice acting really doing the heavy lifting in terms of bringing the characters to life. This coupled with the fantastic sound effects are some of the games few redeeming features, the other being the beautiful painted style visuals.

It’s a shame that a game with such a great premise is derailed by relying far too heavily on fanservice, jokes about perverts, and cheap stereotypes in the place of any actual character design. No matter who the character is or what the situation is the conversation always seems to come back to the topic of breasts, or sexual assault, often in attempt to get cheap laughs. It’s such that even players familiar and comfortable with these themes may find it far too much, it being used to prop up a storyline that really could and should stand on its own merit. Throwaway comments, such as one character referencing lesbians as abnormal, feel like either an error in translation, or a serious miscalculation on the writers part. The former is far more likely, as more than one translation error occurs in the game, but this particular one leaves a bad taste in the mouth. Our World Is Ended (Reviewed on PlayStation 4)

Our World Is Ended. Launch Trailer

New Screenshots Pleased For Our World Is Ended.

Our World Is Ended. Release Date and Day 1 Edition Announced

I don't mind overt sexuality & some humor, but if it's too thick in what's supposed to be a serious story the 2 elements counteract & neutralize each other.

And we're all sick of goddamn 1 dimensional trope characters. Why write like that?

This is the same issue that I have with a lot of this kind of game to be honest. I like pornography and I like videogames, but that doesn't mean that I think the two work well together. I like lemonade and I like gravy, but I'm not going to combine them...

Its so overdone in this game it got annoying. I almost put it down a few times it got that bad.  Its not the odd joke between plot, it IS the plot most of the time. Genuinely shocked it was released on a family friendly console like the switch.

Our World Is Ended