Out Of The Park Baseball 17 Review

I will start out by saying that I myself have never been a sim fan or spreadsheet simulator enthusiast, games like Football Manager and the like have never really been my thing. For those that have never played an Out of the Park game before, Out of the Park Baseball is a game series that is a text-based baseball simulator much like Football Manager that has a vast set of features to accommodate the most enthusiastic baseball managers. Now not being a fan of baseball or sim type games would make you think that I would be the wrong person to review this game, however I was surprisingly impressed with the amount of depth and features they managed to squeeze into this title. Perhaps one of OOTPB’s best features is the historical game mode. You can choose to play any season that occurred between the years 1871 and 2015 which I thought was an amazing feature for those that are interested in the historic matches that have occurred throughout baseball history. This is very important to fans of the sport and it was a good way for the OOTPB development team to well above and beyond my expectations. Not only are you able to pit any two teams together in a game or series your game’s rules will also change depending on what year they play in, as the game evolved greatly over the years.
On top of being able to play some truly unique historical games, you can also play a modern season outside of the MLB. In other words you can play as a minor league manager if that’s what floats your boat. By having the ability to play between major leagues and minors leagues that gives you over 150,000 real baseball players which is a pretty impressive feat. While the game has a wider variety of game features that will keep many a baseball fan busy, there is one major drawback to this game: it has a freaking steep learning curve! Playing this game as someone who knows the basics of baseball, I can easily say that the more you know about the actual sport, the better you will be at this game. There are so many tricks to learn when it comes to balancing player morale, injuries, and of course the thing that keeps all of this going, money. If your team is beginning to run low on cash you’re going to have to pull some of your best players before they reach a point where they should be receiving their player bonuses for winning. Seriously this game allows you to pull your players off the field so that they can’t show their skills and make more money.

While I may not be a massive simulator fan, I can still easily say that one of my favourite features behind the game is that there are two ways you can play the game. You can just make the big decisions regarding your team and basically feel like the big cheese or you can do some serious coaching. The coaching actually allows you to do things from, picking your team lineup, to telling a player to steal a base. It’s a lot like a coaching sim that got added into a team management sim and for that I have to tip my hat to the developers for going the extra mile. 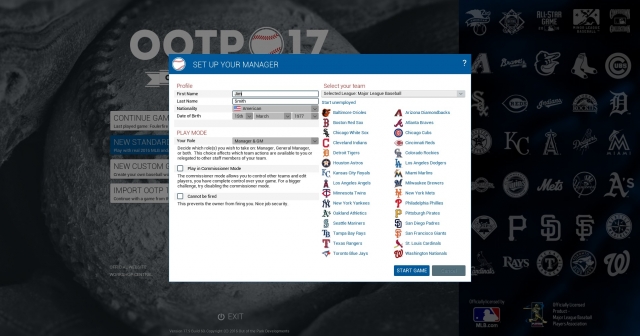 To add on to the micro management of simulating a baseball manager, you also have to pick the staff that you hire on to work for your team. You actually get to choose things like pitching coaches, batting coaches, and you can even choose to hire to scout out talented players to add to your roster.

While I’m not a massive fan of simulator type games, it’s hard to dislike Out of the Park Baseball 17 because there’s actually very little wrong with it. The game is packed with features and very few bugs, and I actually had quite a bit of fun re-enacting historical games, and yes I’ll admit I also enjoyed telling my players to steal bases and pitch. I would highly recommend this game for any baseball fans out there that are looking for a rich and feature filled baseball manager game.

Out Of The Park Baseball 17 (Reviewed on Windows)

Out Of The Park Baseball 17 Review

Out of the Park Baseball 17 Takes to the Field 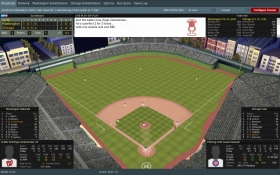 Out Of The Park Baseball 17