Remakes are never an easy task to accomplish. The rocky road of taking a beloved classic dear to many hearts in the world and breathing a new lease of life into it is difficult. Especially as it should offer something new whilst remaining close to the original piece of work.

Sumo Digital were brave enough to accept the challenge of creating OutRun Online Arcade for the PSN and Xbox Live Arcade systems and is essentially a home port of the OutRun 2 SP arcade machine. Previous home console and PSP title OutRun Coast 2 Coast featured a veritable feast of additional content and all the courses from OutRun 2, this is what I would consider Tesco Value Outrun; very much what you might expect to get for £7.99/800 MS Points. The core of the game is your standard point to point arcade racer, pitting you in the driving seat of one of ten officially licensed Ferrari's, ranging from the classic Dino up to the current Ferrari flagship; the Enzo. 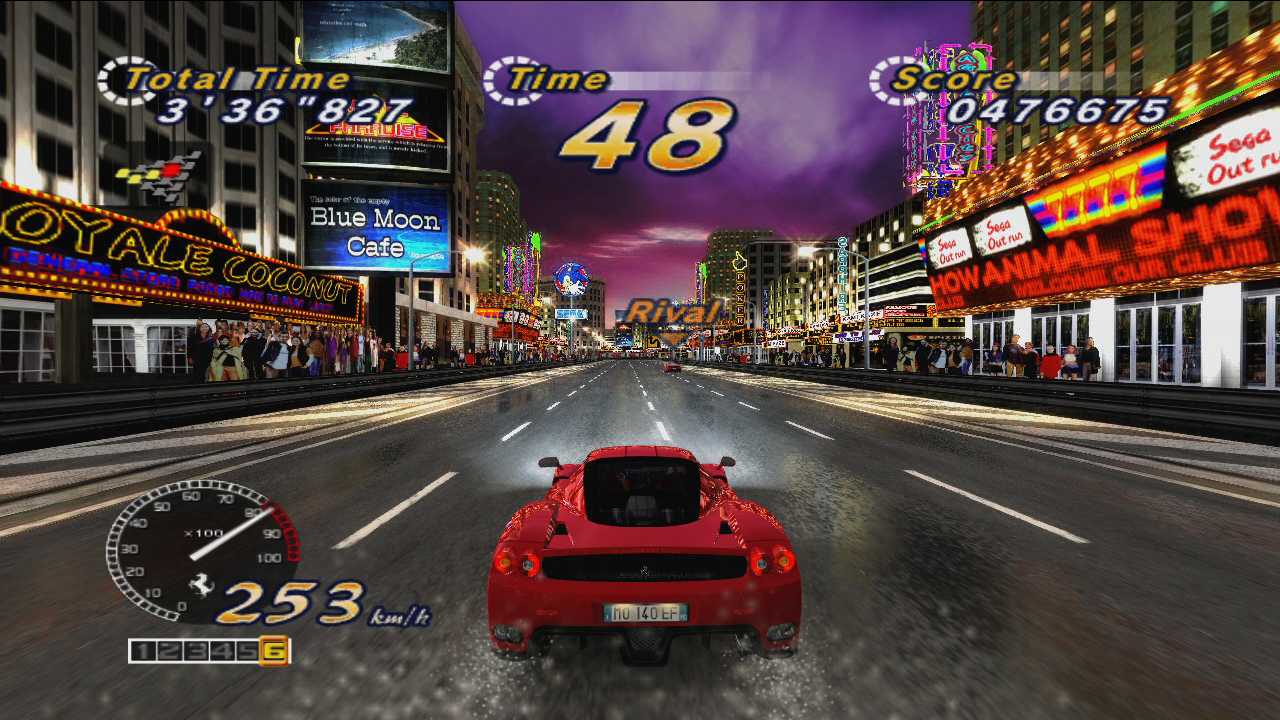 There are a couple of other modes to increase longevity such as performing certain tasks like drifting within a certain area on a bend or simply passing cars in the Heart Attack mode, or simply trying to strive for perfection in Time Attack. Finally if you wish to simply cruise through all 15 stages of the game then the final mode is the choice for you as you simply get to do just that.

The main gameplay addition to this over the original OutRun 2 arcade machine is slipstreaming. By tailing opponents or other traffic you gain extra speed, propelling your car past your rivals. Other than this things are more or less as you they were in the original. You are still able to fling your car around corners as if attached to the circuit with super glue, performing power slides at break neck speeds while the physics are bordering on comical as collisions have all the believability of a 16-bit racer and the sense of speed is incredible which actually adds to the charm of this title. 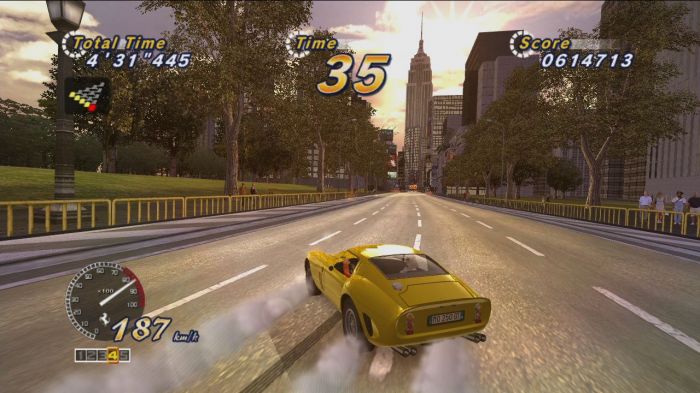 OutRun 2 has always looked great, with its fantastic palette use and wondrous blue skies, and for the most part Sumo have done a cracking job in converting this game over from the arcade box. It certainly doesn't look up to par with modern racing game standards such as Grid or Gran Turismo, but the 720p visuals are sharp, giving the game a real arcade appearance that was missing in the Xbox and PS2 versions. All 10 Licensed Ferrari's are modelled beautifully and the scenery is crisp and inviting. However the traffic models for the rest of the vehicles on the roads are very basic and box like, though you don't tend to focus much attention on these cars as they are simply an obstacle to be overtaken.

OutRun's soundtrack is one of the most memorable and iconic of its time, and the tunes here live up to the past games. Though while the music side of the game can't really be faulted, I do however have a couple of gripes with the rest of the audio. Every single Ferrari seems to have the same default engine note and personally I would have liked to have heard the subtle variations in the different V8's/V12's that were used in the actual cars. Also after selecting which musical track was to caress my ears, I noticed the speech that told me which track I plucked from the selection got cut off as the game was in transition from selection screen to actual game, yet this is a minor mark against the Sumo team. 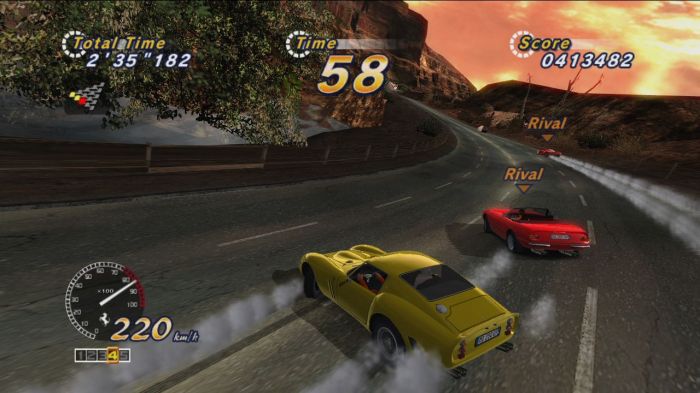 The multiplayer side to OutRun is what the majority of gamers will be purchasing this classic for. The chance to race against up to 5 other opponents in the various game modes is a delight. Whilst being relatively short over a standard race, just making the slightest mistake could determine if your finishing position is on the podium or in the pits like a loser. Six player races are a fantastic laugh, with numerous set-up options for the host to tweak, such as collisions, catch-up and car class (normal or tuned). There are also online leaderboards for each of the game modes (split into each of the five goals and for tuned and normal cars). It's a decent package overall. 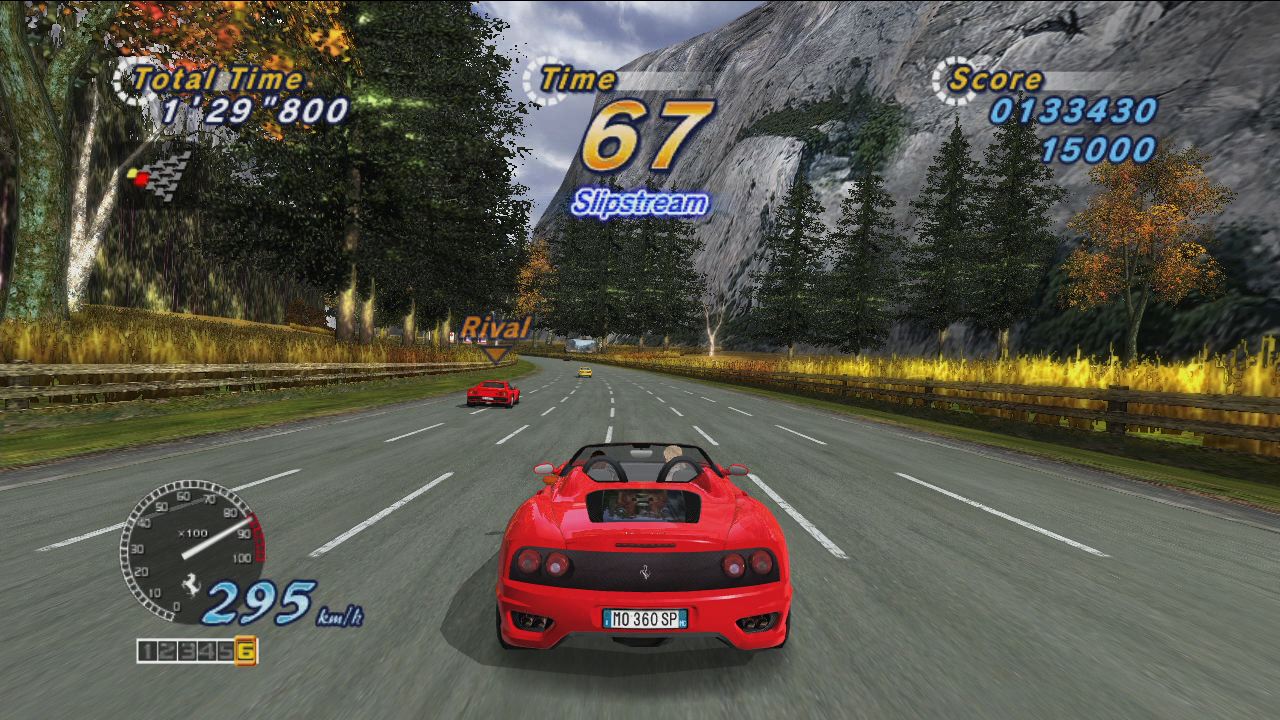 OutRun Online Arcade is definitely worth the price tag once you get used to the drift style arcade racing, and at 800 MS Points/£7.99 it feels like good value for money. Whilst being a very solid title, a few minor flaws and the occasional frame rate drop in heavy traffic drops this short of remake perfection.

Remakes are never an easy task to accomplish. The rocky road of taking a beloved classic dear to many hearts in the world and breathing a new lease of life into it is difficult. Especially as it should offer something new whilst remaining close to the original piece of work.