I guess it’s time for me to put my culinary skills to the test once more. Having gone through Overcooked! 2 recently, I was fairly confident in my ability to take on the recent story DLC that came out for the game. Of course, that was until I actually started it up and played it. I’m not sure what I was expecting but it certainly wasn’t the Dark Souls of cooking expansions, that’s for sure. I hope you have at least three to four players, because you’re not finishing this DLC otherwise.

Overcooked! 2: Surf N’ Turf is an expansion that’s based around teamwork. I know that the games themselves are also based around teamwork, but there was at least the option to attempt a solo runthrough of the campaign. In Surf N’ Turf, trying to run solo is the quickest way to make yourself realise that maybe you’re just not very good at gaming… I know it was for me. As well, going in two-player is a fruitless endeavor. I got my old buddy that helped with Overcooked! 2 to lend me a hand and we couldn’t make it out of world one. 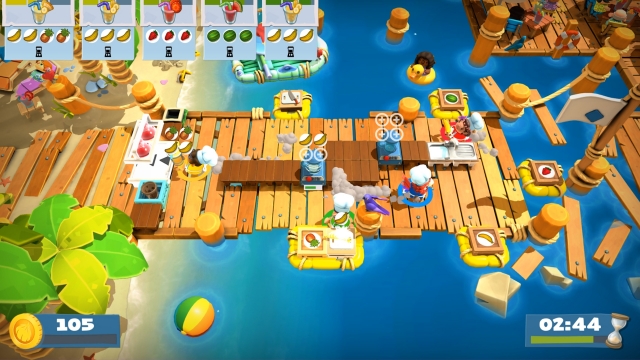 Not that any of this is a deal breaker, mind you. If anything, it’s just a bit disheartening that you can’t play through Surf N’ Turf with the one friend you finished the core game with. On the other hand, the expansion opens up the chance to introduce other people to the game so that you can get to know one another as you cook those crafty main courses together. Honestly, it’s kind of like Mario Party, except that everybody wants to talk to each other when it’s over.

Co-op aside, the gameplay is very similar to Overcooked! 2. There are new tropical style recipes to create, which is a nice bonus, but the overall creation process for them really hasn’t changed from the main game itself. This isn’t a huge issue though, as players who are making the transition to the DLC will find it to be rather smooth because of the similarities. The only real notable difference that I could find is that things are a bit quicker, but that’s more or less due to the increased player count that was mentioned above. 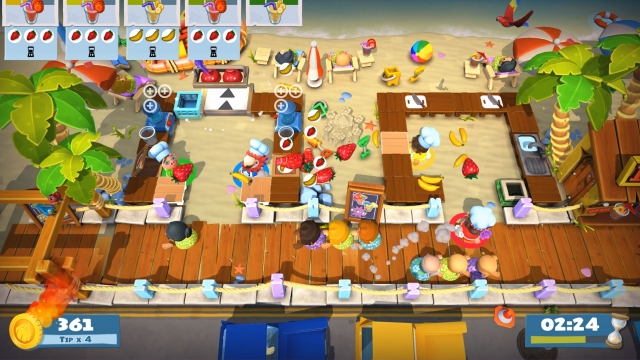 Moving on to graphics, Surf N’ Turf does a wonderful job at the cartoony nature of its visuals. Much like the original game had beautiful settings in regards to its various locations like swamplands, magic castles, and airborne kitchens, Surf N’ Turf has a beautiful setting in regards to its tropical themed getaway. Once again, the developers have done a great job at bringing across something so goofy, and making it so real to the player on a visual level.

The last thing I want to bring up is the story for this expansion which, compared to Overcooked! 2, is pretty lacking. It makes sense though, considering that Surf N’ Turf is just DLC. However, it’s not the length of the story that’s the issue, it’s the quality. See, the plot for Overcooked 2! involved the raising of the unbread which were meant to be fed by the player. Whereas, the plot for Surf N’ Turf is that you’re on vacation… thrilling. It’s a nice change of pace, I’ll give it that, but after the big obstacle of the core game, I was expecting something a bit more. Life goes on I suppose. 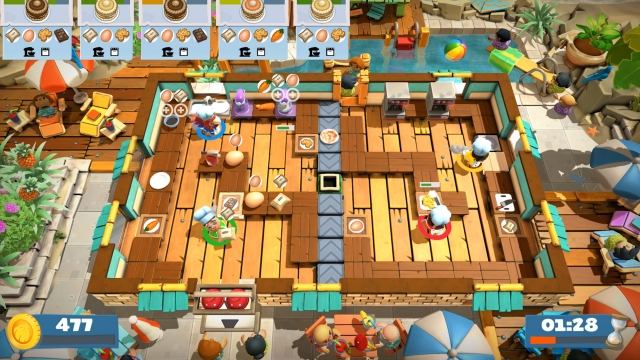 So, with all that being said, is Overcooked! 2: Surf N’ Turf worth getting? Overall, I’d say yes. It’s a nice addition to an already great game and you get some more time to cook-it-up with your pals in the tropics. Despite my grievances with the lack of story and poor use of co-op, this DLC still hits a lot of solid notes and is worth your attention whenever you get the time.

Overcooked! 2: Surf N' Turf is an expansion that does a solid job in most areas. That being said, don't expect the same level of effort in terms of story or cooperative gameplay, as the end result may leave you wanting something more.