Who doesn’t love big robots smashing into other, similarly sized robots? Personally, it’s a fond interest of mine, likely inspired by Transformers, and I looked forward to smashing robots into each other regularly in Override 2: Super Mech League. Sadly, outside of some fantastic robot design, the game falls short of the bar set by its premise.

Despite a control scheme that is accessible to people of varying backgrounds, these brawling robots feel so weightless. Between heavy punches or kicks, nothing feels as epic as it seemingly looks. It ventures more into the Rock-Em-Sock-Em Robots style rather than feeling like a battle between metallic titans. The game fails to take advantage of the DualSense 5’s haptic feedback too, which really could have helped the game shine, considering the concept of gargantuan robots beating on one another. The straightforward combat is a boost though, despite how shallow it feels when making contact. It’s designed in a way that most people can pick up and play, with the game doing an excellent job of making the game easy to understand and difficult to master. 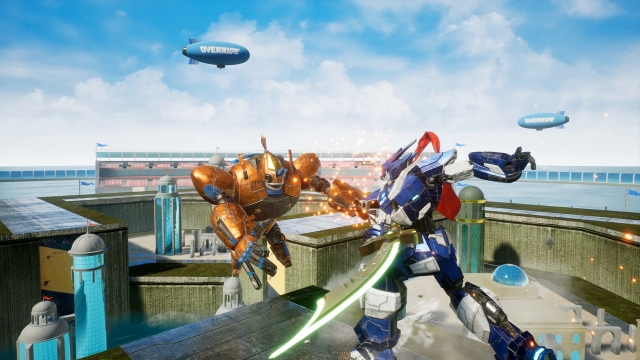 Despite the impactless feeling, the action does get heated at times and the game performs well throughout. Whether you’re battling the AI, taking the fight online or having a wild four-person brawl, there are no noticeable drops in the game's performance. This allows you to take in the action, as well the unique animations each of the different robot designs have to offer. Online battles are a treat too. Very rarely do you encounter issues with connectivity, meaning the fights always feel fairly contested. You’re unlikely to be able to blame your WiFi for your losses in Override 2.

It’s a good job the online experience is as good as it is, because offline Override 2 struggles to pack a punch. The offline has a career mode (which allows you to play the fights online). There’s a bare minimum story as you aim to become the top bot fighter. Winning more fights earns you coins, which in turn can be exchanged for new mechanical behemoths. Thankfully playing online is an option, because fighting the AI is a tedious slog. You’ll likely find yourself running rings around your AI opponents quite early on. The difficulty does increase slightly as you progress, but not to a noticeably challenging level. Offline just seems like an easy way to farm coins to unlock mechs, before you take yourself online for a proper fight. 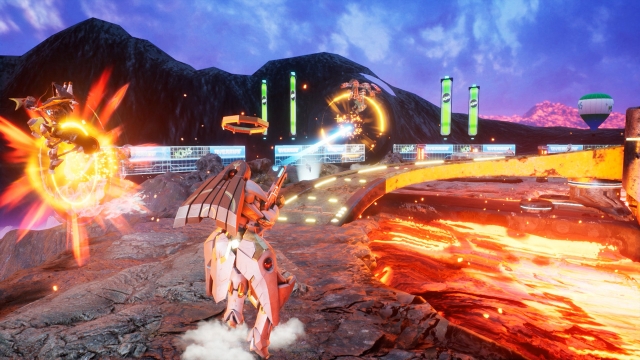 Thankfully, the mech designs are good enough to encourage you to plough through any mundane gameplay. There’s a lot of interesting designs in Override 2, ranging from cool, to cute, to bizarre. The little animation tweaked between each robot also adds a range of personality to them, which really helps you click with certain mechs. It’s also clear certain robots are more efficient in battle, I very rarely struggled to win when using Mya (and they seemed a popular choice when going online), for example. Yet, that was never going to stop me picking the giant toaster every now and then.

The battle stages are also, visually, well designed. They look distinctive, with each map's layout providing enough change to affect your plan of attack. For me though, they’re just too small, especially when there’s more than two mechs getting involved in the action. Everything becomes cluttered, which really prevents the flow of the game once more than two people join in the fun. It’s a shame, because I like the design of the world, they’re just too small to really contain the action of several players.

Override 2: Super Mech League is a fine experience, but one you are likely to become quickly bored of. The mech and world design are great - it’s clear how much thought went into each design - but it’s let down by its weightless, shallow gameplay. The saving grace is, the gameplay is very accessible, meaning most people should be able to pick up and play without much issue. Ultimately, Override 2: Super Mech League has the potential to be something greater, but sadly this edition falls flat.